5 Impressions of EMO 2019, from Automated to Autonomous Manufacturing

The robot show? Not quite that. But automation and the expectation of processes that can run unattended if needed are clearly core to manufacturing now.
#zaxis

As illustrated by this scene from Mazak’s booth, robots seemed to be everywhere at this year’s EMO. Their prevalence made clear the extent to which automation in general, and robotic automation in particular, is now an established and expected element of metalworking processes. The arrival of robots in this way is one of the impressions of EMO 2019 I describe below.

The biennial EMO exposition, the largest machine tool trade show in the world, was held last week in Hannover, Germany. One machine tool company executive I was speaking with while we were there offered a fitting off-the-cuff take on what we were experiencing. “It’s like a robot show with machine tools,” he said. That was an exaggeration, of course, but one that captured what was most strikingly apparent about the show this year: Robots were everywhere. Robots, it would seem, have now reached the point of being not just accepted but required. Exhibitors throughout the show seemed to convey the same perception of what manufacturers are asking for right now: automation.

EMO is too big an event to cover thoroughly. With more than 2,200 exhibitors from 48 countries covering nearly 2 million square feet of exhibition space, it’s only possible to see a sliver of what’s being presented at the show. Indeed, Executive Editor Derek Korn and Publisher Bryce Ellis were there at EMO with me, and a sliver at best is what the three of us in total were able to see.

Still, I had the chance to spend almost the entire week at this important event, which I had also attended two years prior. Noting some of what was different between the two editions of the show offered a gage of how manufacturing technology and its users have moved or changed in the interim. That is, EMO gave me a glimpse of where are now, or where we might be headed. In that spirit, here are some of my impressions of EMO 2019: Machine tool suppliers support manufacturers in need of automation by serving as a single source for both the machine and the part handling. This even applies to lower-cost automation. EMO was the first show in which machine tool builder Hurco exhibited with ProCobots, the robotic automation supplier it recently acquired.

Major machine tool builders with large exhibit areas sacrificed the number of machine models they brought to the show in order to display a greater variety of automated systems suited to running continuously, producing more output with light staffing. Machine tool suppliers wanted to convey their machines’ capabilities to produce within unattended or lights-out systems, and also in many cases to affirm to customers that they will stand behind the automation equipment in much the same way that they will service and support the machine tools.

Importantly, the development of automation technology has moved not just into more sophisticated applications, but now also into lower-cost ones as well. Collaborative robots were commonplace throughout the show, as not only machine tool suppliers but also suppliers of tooling and gaging systems demonstrated the possibilities of automating tasks that would have been too low in value or too infrequently performed to justify a robot in the past.

From a surface-level view, Industry 4.0 would have seemed to be in retreat at EMO 2019 compared to the previous edition of the show. It was seen much less in announcements and on signage, and fewer companies seemed to proclaim an association with this term as a bragging point. The term Industry 4.0 has lost some energy as a buzzword. However, the idea of gathering relevant manufacturing data and putting it to use through connected systems continues to advance.

It’s hard to generalize here because there are so many different ways the use of sensors, connection, data sharing and data analysis is making manufacturing devices and systems more responsive or easier to use to their full capability. So let me offer just one example: Measurement technology company Renishaw demonstrated its Renishaw Central system, in which the findings of gages throughout the shop can be aggregated into a real-time view and compared with trends in other ambient effects, notably temperature. The aggregation and its potential power reveal something interesting: All along, this well-known metrology company has not just been a producer of measuring devices, but (perhaps more importantly) it has also been in the business of providing actionable data. The Central system is an example of the next level: tools for interpreting the data to better identify the correct action. VDW introduced Umati, a standard for machine-tool data sharing. Machines throughout the show were monitored on a system enabled by Umati. Given there is an existing machine tool data standard, what will be the impact or role of this one?

Arguably the most notable development at the show related to manufacturing connectivity was the working debut of Umati, a standard for sharing data with and among machine tools developed by VDW (the German Machine Tool Builders’ Association) in partnership with a group of machine tool and control system manufacturers. Various machines throughout the show were being monitored in real time through a remote system built on Umati. What impact the introduction of this standard will have is unclear, because there already has been a standard in existence with the same or a similar aim — MTConnect. MMS has reported on the advance of the MTConnect standard for years, and we have argued for its value, so our view might well be biased. However, the introduction of another standard seems a contradiction in terms, and is as much a concerning development as it is a promising one, since multiple standards means there is really no standard at all — just multiple competing frameworks equipment makers must either choose between or support in parallel. What Umati might offer to manufacturers and what possibilities it might bring — and how it might prove different from the more established standard — remains to be seen. 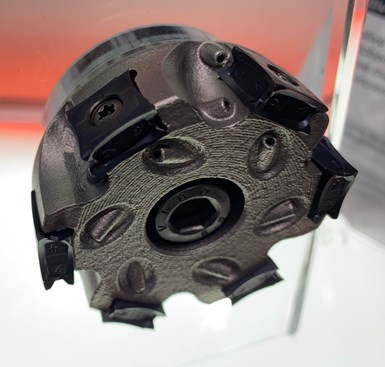 This milling cutter body from LMT made via additive manufacturing features curving and branching internal channels to deliver coolant flow precisely where needed. In test cutting, the more effective coolant delivery has been found to translate to a tool life improvement of 50 percent in milling titanium.

In one sense, additive manufacturing (AM) is not a major part of EMO. Various machine tool builders show additive offerings as part of their exhibits, and these are joined by a small number of exhibitors in an area dedicated to additive that is just a portion of one hall. But in another sense, additive manufacturing is a major part of EMO. This year, it could be seen having a significant impact on one vital element of conventional metalworking technology: cutting tools.

Without looking for it, I kept discovering examples at the show of cutting tool providers showing new tooling components — components not previously possible — that had been made through additive manufacturing. In some cases, additive provided a means to attain a cutting tool body with superior strength-to-weight ratio better able to move quickly within the machine or cut at high rotational speed without chatter. In the greater number of cases, AM provided the means of attaining curving through-tool fluid channels that improve tool life by delivering coolant flow precisely to where it can be most effective.

Not all major additive manufacturing technology suppliers exhibit at EMO, but SLM Solutions was one that did. The Bugatti brake caliper seen here was made additively, but finishing this part presented some machining challenges.

And as additive improves the possibilities for tooling, tooling can also be vital to the promise of AM. One major AM technology supplier that did exhibit at EMO was SLM Solutions. The company showed a brake caliper made additively that presented machining challenges addressed by two tooling specialists, Benz and Haimer, as described in this video: 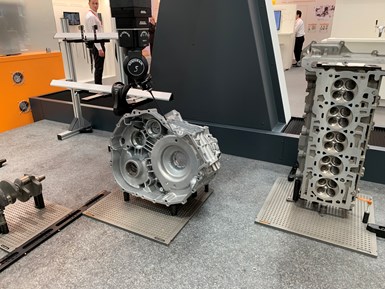 Here are auto parts old and new. In this scene from Renishaw’s exhibit, the part being probed is a housing for a hybrid automobile. The company showed its Renishaw Central software for unifying measurement data into a comprehensive picture that makes underlying causes and appropriate actions more clear. This photo illustrates two of the impressions in this article. Additive manufacturing went into creating this tool for fast precision machining of the ID of a motor housing for an electric vehicle. Machine tool supplier Makino developed this tool and was showing it within its a51nx machining center.

This last impression is really more of a prediction: Machine shops in the future will not only use stationary automation — that is, robots staying in one place or moving along fixed tracks — but also will rely on autonomous automation, or automated devices able to find their way freely and safely through the plant. There were many examples of autonomous mobile cobots to be found operating throughout EMO, demonstrating an efficient and flexible means of carrying tools and parts from station to station or machine to machine as needed without humans present. There were not a lot of these independently moving robots — a small enough number to make these devices curiosities rather than mainstream offerings — but there were enough to demonstrate and validate the promise of this idea.

The automated shop of the future? Doosan was one of the exhibitors demonstrating autonomous automation. The independent robot here carries parts through the stations of a cell that includes machining center, lathe, and inspection.

As I say, autonomous is coming, and really it is the prevalence of stationary robots at this show that gives me confidence in that prediction. Robotic automation in general was not always mainstream at major metalworking shows. Applications of robots serving machine tools used to be curiosities as well. But eventually the curiosity is satisfied; eventually the argument is made. The use of robots to serve and automate machining processes was a good idea destined to win its place, and now that destiny has been realized. Recognizing this, I looked around EMO this year in search of the idea that is too good, too potentially effective, for it not to win a place in the future as a mainstream part of manufacturing. Autonomous manufacturing is what I found. At some EMO in the future, I expect we will jokingly wonder if this isn’t the autonomous robot show.