Designatronics’ CEO says, “We can access a few million dollars more business” with each skilled machining employee who can perform complex setups and other sophisticated work from day one.
#workforcedevelopment #zaxis

“We are ready to acquire,” says Robert Kufner, president and CEO of Designatronics. The Hicksville, New York, company is a maker of motion control products and small power transmission components under the Stock Drive Products/Sterling Instrument (SDP/SI) brand and other brands, as well as a contract manufacturer for sectors including aerospace and medical. And the company wants to purchase other CNC machining businesses, but not for the usual reasons companies acquire. Expanding capital is good, getting access to more customers is good, but Designatronics wants to acquire as a way of adding skilled employees.

“We are below our fighting weight by about 50 people,” Mr. Kufner says. While current manufacturing staffing is 170, the amount of business opportunity the company sees could be met with a staff of 220. Finding that many more skilled manufacturing employees in and around the company’s area is a tall order, in part because people with these skills already have good jobs. So Designatronics is willing to buy their jobs for the chance to welcome them in.

I spoke to Mr. Kufner about this motive for acquisition. The analytical case that brought him to this conclusion provides one of clearest pictures I’ve heard in a while of the predicament manufacturing employers face. 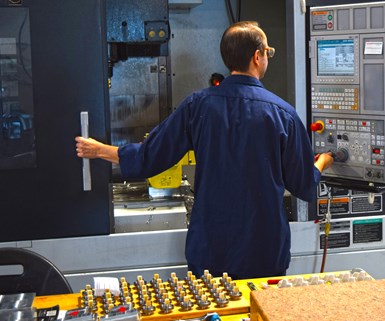 The employees Designatronics needs are missing largely from the second and third shifts, he says. The company has invested to automate, in the last three years adding at least eight more CNC turning centers capable of single-setup production from DMG MORI and Miyano, as well as part collection automation from Royal Products. But it’s not enough, he says. Automated systems need a skilled person performing setup, and Designatronics’ mix of work tends to rule out any machine running all the way through an unattended shift. Even after automation, the company still needs skilled people. So how to find them?

Hiring recent technical school graduates would seem a natural choice, but he says any new hire such as this still needs considerable training. “It’s probably five years before this person is experienced enough for full-scale setups on machines like ours,” he says. And that training time is an opportunity cost. “By our calculations, we could access a few million dollars more business if we can have someone hit the ground now instead.”

So then, how to find someone who is ready now? Not via job postings, he says. Only 1-2% of people answering the ads are viable candidates. The effort to filter and vet imposes high cost. Recruiters reduce the filtering, but add cost of their own. However, “If we can buy a small shop, then — yes, we’ll get equipment, and yes, we’ll get customers — but we will also get staff that will equate to millions of dollars of business we wouldn’t have been able to take on.”

There have been no takers yet. In some cases, shops approached as potential acquisitions have instead become suppliers. This is a good outcome, just not the best, because Designatronics would rather do its work in house. But the supplier relationship can build trust that might lead to acquisition later.

It has to be the right shop, Mr. Kufner says — one where personnel are skilled with machines and machining similar to his company’s. But plenty of shops fit this description, many run by owners nearing retirement. When the time is right for some of these shops, he hopes they’ll see Designtronics’ need as their opportunity.