July 2019 marked the 50th anniversary of the first moon landing. Half a century later, the discussion of space technology and exploration goes on, with proposed new trips to the moon and Mars, ongoing research efforts at the International Space Station, and nearly continual launches of communication and defense satellites. Marton Precision Manufacturing (Fullerton, California) is a CNC machining company that uses large machine tools with advanced simulation software to efficiently and cost effectively manufacture large, space-related components. 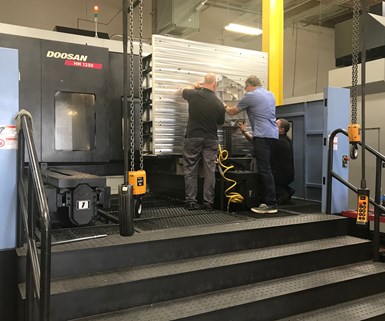 Despite being a part of this high-tech field, Marton Precision’s﻿ five-axis machinist, Miguel Chavez, used to dry run programs and climb up into the shop’s gantry machine tool to check for potential collisions because of inconsistencies between CAM programs and postprocessed G code. That changed when the shop acquired NCSIMUL CAM simulation software from Hexagon Manufacturing Intelligence

Daniel Marton and his wife, Mary, founded the shop in 1986 to manufacture laser eye surgery equipment. Today the company provides large, five-axis milling and vertical turning, thin-wall and high-speed machining, and manufacturing services including engineering, assembly, inspection, waterjet and EDM, and metal treatment. Among Marton Precision’s customers are NASA, Jet Propulsion Laboratory and other large private space companies. In addition to space, satellite and aerospace components, the company also makes parts for the military, scientific instrument, medical, and oil and gas industries. The company has 50 employees.

Mr. Chavez works with the company’s NC programming department and recommends fixture and tooling concepts for the machining of complex parts. Most of the shop’s competitors make smaller parts, Mr. Chavez says, so Marton Precision’s large machines — handling parts as long as 120 inches (3,000 mm) and 42 inches (1,050 mm) in diameter and even larger — provide a competitive advantage.

Leave Simulation to the Software

Despite that advantage, it proved challenging until recently to meet tolerances of 0.0005 inch (±0.0125 mm) on large, low-volume parts in a timely and efficient way. When Mr. Chavez would write a program in its CAM software and post it for G code, the results were sometimes not as anticipated. “It could look good in the CAM program, but after posting out the G code, the machine acted different,” he says.

To avoid making inaccurate parts or crashing the machine, he would often dry run the programs. If there was a section of the tool, part or machine he could not easily see, he would stop the dry run and climb into the big gantry mill to determine if there would be interference. Even then, he could not always discover that there was a problem until the end of the program. In that case, he made adjustments and began the dry run process again. When fixturing adjustments were needed, that meant yet another setup. “Depending on how long the program was, it might be like two days, 16 hours or 12 hours, depending on how long the program was, to get the program up and running successfully,” Mr. Chavez says. The shop even got in the habit of buying an extra billet of material in case there was a problem during the actual machining process.

Marton Precision’s DMG MORI NT DCG 6600 is a five-axis mill-turn that features 3,000 mm between centers and accommodates parts up to 1,050 mm in diameter. Mr. Chavez (center) says that the shop’s large-part capacity sets it apart from many of its competitors.

The software verifies programs in three steps: It investigates and corrects coding errors, simulates to locate collisions and correct motion errors, and validates the part cut and machining result. Beyond simple toolpath verification, it includes consideration of the machine’s interior features and tool movement patterns.

From 16 Hours to Two

“We do a lot of complex machining, and NCSIMUL comes in very handy,” Mr. Chavez says.  “Instead of crashing the machine or damaging the part, we can see it beforehand and make adjustments before I even run the part. Once I complete my program, I just click a button that uploads the CAM information into NCSIMUL.” He goes on to say, “I was surprised how simple it is. NCSIMUL looks at the G code, because that is what the machine cares about.”

Importantly for Marton Precision, NCSIMUL software is customized for each machine on which it will be employed. Marton Precision buys an STL model of the machine from the machine tool builder, including control information and other parameters, then sends that package to NCSIMUL, which configures the software accordingly. Marton Precision has NCSIMUL packages for eight different CNC machines.

Training to use the software required two eight-hour training sessions, and implementation involved frequent contact with NCSIMUL tech support. “It took a couple of weeks or a month, maybe, to get it all situated,” Mr. Chavez says.

In use, Mr. Chavez says the benefits of using the software are clear. Instead of 12 to 16 hours to get a program ready to run (and with questionable security), now it takes two hours or less to configure and adjust a secure program. And the shop no longer needs to buy extra backup material.

Mr. Chavez employed NCSIMUL for the first time on one of the shop’s more complex parts, a fuel cell cover machined from 7050 aluminum on the gantry mill.