Steelville’s equipment list includes Okuma LB3000 EX mill-turn and Multus B300 multitasking lathes along with a variety of three-, four- and five-axis machining centers from both Okuma and Makino. A number of these are joined to one of the company’s two flexible manufacturing systems (FMSs), one of which is equipped with a 167-foot Fastems cell, said to be the longest in North America. The company also performs press brake bending, waterjet cutting, hydroforming and Nadcap-certified heat-treating, anodizing and painting.

The two FMS lines run largely unattended, around the clock, at least five and sometimes seven days per week, utilization that Mr. Bell notes has been a key driver behind the company’s impressive growth. “When we installed our first FMS back in 2009, we had around 55 people,” he says. “Within four years, we employed three times that number, in large part because of our switch to flexible manufacturing. It’s pretty incredible what happens to a shop after investing in an FMS.”

Manufacturing engineer Brandon Eaton was part of that growth. He has worked at Steelville since 2013 and recently transitioned away from the programming department into full-time process planning, project management and other engineering functions, but he still lends a hand to his fellow programmers when the 10-person team gets overloaded. He estimates that approximately 200 jobs per month come through the department. Of these, some are brand new programs and others are simple feed and speed tweaks — all are checked with Vericut before being released to the shop floor.

“We bought Vericut about the time our first five-axis machining centers started hitting the floor, but it’s a rule now that all of the CNC programs have to be verified,” Mr. Eaton says. “In fact, there was even a series of jobs recently where the customer specified the use of Vericut or a similar software program to ensure that the machined part would match the CAD model. It’s that important.”

According to Mr. Eaton, even the most capable CAM systems don’t verify that the postprocessed G code used by the machine tool is correct. That’s why he and the programming department use verification software.

Opened in 1959, Steelville Manufacturing Co. has become a supplier of precision components for the aerospace and other industries.

“You’d be surprised how many things we catch,” Mr. Eaton says. “I don’t know that we ever post a program and have Vericut not find something that we need to go back and change. Granted, most of these are small tweaks, maybe an axis over-travel or a feed rate that’s out of range, but once in a while you’ll catch what would have been a serious crash.”

Crash avoidance aside, Mr. Eaton has recently come to view Vericut as an enabler of continuous improvement. Shortening setup times and preventing machine downtime are obvious wins. But these days, Mr. Eaton is more interested in Vericut’s ability to reduce cycle times with its Force Optimization module. He says that it is responsible for cutting 20-43% off machining times on every program he uses it for. “It’s made a night and day difference,” he says. 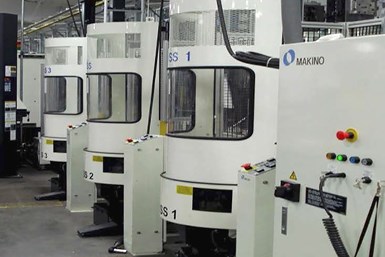 This Makino FMS is one of two such systems at Steelville Manufacturing. Vice President of Engineering John Bell says the company’s adoption of automation has been a game changer for the company.

Force Optimization is a physics-based NC program optimization module that enables Vericut to analyze and optimize cutting conditions throughout NC program operations. It automatically analyzes the tool path and compares the expected machining forces against a material-specific database. It then uses these values to determine optimal feed rates throughout the program, speeding up where possible and slowing down when necessary to keep keeping cutting forces consistent. All of this information is clearly visible to programmers, allowing them to see metal removal rates, tool deflection, power and torque levels, and more. According to CGTech, Force Optimization provides the user with “a proactive analysis of NC programs, making them right the first time.”

The Force Optimization module’s feed rate management is designed to maximize chip thickness and keep it constant, matching the cutting conditions to the cutting tool’s performance parameters and the spindle’s power requirements. Rather than overwriting the existing NC file, the module creates a separate .opti file. Force Optimization can then display the original file beside the .opti file for visual comparison.

“On my very first try, it cut the cycle time by 35% on three separate machining operations,” Mr. Eaton says. “It also increased tool life by 150-200%. It was pretty amazing.” That first job involved machining Ti-6Al-4V titanium, one of the difficult metals that CGTech developers had in mind when they designed the software.

Mr. Eaton says the initial Force Optimization setup “took some time and testing to get everything dialed in,” including entering minimum and maximum feed rate values per tool, how much power the machine spindle and servomotors provide, and so on. After that, however, using Force Optimization was a matter of a few clicks. “Once it’s turned on, you just hit the play button just like you would for regular verification,” he says.

Optimizing in Aluminum as Well as Titanium

After success with titanium, Mr. Eaton tried Force Optimization on a job machining 7075-T6 aluminum, but he didn’t expect much improvement.

“As any machinist knows, you can get away with murder on aluminum, and that’s part of the problem,” he says. “We were pushing the feed rates so hard that the spindles would stall, which of course breaks tools and wreaks havoc on the machine.” However, Force Optimization improved things for this metal as well. “Force Optimization anticipated that and backed down the feed rate automatically and pushed feed rates faster where possible, so even in the softer materials we saw huge gains.”

“We tried Force Optimization several years ago when it was first introduced, and all of us were a little scared, thinking ‘You’re going to break the machine if you try to feed titanium that fast.’ So we shelved it until earlier this year,” he says. “Even now, after we’ve had some big successes, the operators are a little skeptical until they see it working. It’s such a drastic change that it takes people off guard at first.” Despite the initial unease, Steelville has since enjoyed faster cut times, better tool life and higher-quality parts.

In addition to the productivity benefits, Mr. Eaton says that the module can also help diagnose problems with a job. “If you see a bunch of spikes in the Force Optimization diagram, for instance, you immediately know that you should clean out a corner differently, or maybe use a different tool. In some ways it teaches you and lets you know when you should use a different programming strategy.”