When a company that specializes in rendering viruses and pathogens harmless via UV light looked to produce a portable disinfection device, it turned to its neighbor Mazak to move from design into production.
#covid-19

Oliver Lawal contracted COVID-19 in late February of this year while attending an international conference about infection control. These types of conferences were routine for Mr. Lawal, who, in his role as president and CEO of AquiSense Technologies, runs a company that specializes in disinfecting water, air and surfaces containing viruses, bacteria and other pathogens.

In fact, AquiSense is considered a worldwide leader in the production of UV-C LED systems — systems that use light emitting diodes (LEDs) to generate high levels of UV-C photons. These photons can render pathogens harmless almost instantly.

As the pandemic swept across the United States, and while Mr. Lawal recovered from the virus at his home near AquiSense’s headquarters in Erlanger, Kentucky, his company was inundated with calls from hospitals, airports and schools seeking AquiSense products to disinfect their own environments.

During the early weeks of the virus’s spread in March and into April, the shortage of N95 masks and personal protective equipment (PPE) served as a call to action for the company. Mr. Lawal tasked several of AquiSense’s scientists and engineers to rapidly design and engineer a machine capable of disinfecting N95 masks and PPE. Within 10 days, the team had designed the PearlSurface 24G9 — a self-enclosed, portable unit that uses UV LED lamp modules to provide no-contact, chemical-free disinfection of high-touch devices and PPE.

With the design in hand, the PearlSurface was ready for production — at least on paper. In reality, the company had no way to rapidly manufacture the polished-aluminum enclosure unit or several other metal and plastic components that the PearlSurface required.

But its neighbor did.

This screen capture depicts the PearlSurface’s UV distribution over the mask. The design is meant to prevent shadowing and provide an even disinfection of the entire mask surface.

Florence, Kentucky, just a few miles from nearby Erlanger, serves as the North American headquarters for the Mazak Corp., whose sprawling campus includes an expansive factory floor that produces more than 100 types of CNC turning centers, multitasking machines, VMCs, HMCs, and five-axis and hybrid machines. This past April, Mazak President Dan Janka met Mr. Lawal at a regional chamber of commerce meeting, where the two discussed the PearlSurface and the challenge of moving the device from design to production fast enough to address the critical health and safety needs of frontline workers.

Facing its own slowdown during the pandemic, Mr. Janka said Mazak would step in to help bring the PearlSurface to life. Within 24 hours of receiving the design files, Mazak’s vice president of operations, Ben Schawe, announced that his team was ready to help push the PearlSurface from design to production.

“I got my guys together and said that since business is slow right now, we've got the capability to help out some local hospitals that want to test these devices,” Mr. Schawe says. “My wife's a nurse, and she was telling me that they didn't have enough masks and protective equipment. In fact, a lot of people from this area also have family and relatives who are in the medical field. That's why everybody was really gung-ho about getting this done. We need to help out as much as we can.” 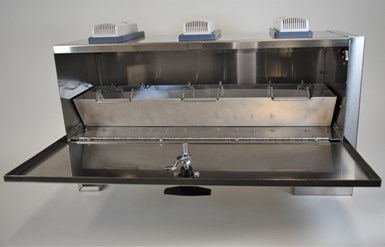 Polished aluminum is the preferred the material for the enclosure unit due to its high reflectivity of UV light. Mazak had to experiment with laser cutting and bending the sheet metal in a way that wouldn’t damage the surface finish.

Challenge No. 1 for the Mazak team was machining and fabricating the enclosure unit — a component with which Mazak has deep experience creating for its own line of products. The challenge came from the polished aluminum, the material preferred by AquiSense for the enclosure due to its high reflectivity of UV light. Mr. Schawe says his team had to experiment with laser cutting and bending the sheet metal in a way that wouldn’t damage the surface finish.

Mazak also 3D printed several mounting brackets for the LED lights after discovering that machining was not needed for the odd-shaped and relatively loose-tolerance brackets. Mr. Schawe says that employees ran some of these printing operations overnight from 3D printers they kept at home in order to keep the process moving quickly.

After experimenting with design aspects of the enclosure unit, over the course of the next two weeks Mr. Schawe and his team offered several suggestions that made the PearlSurface’s design more appropriate for production at scale. Already, several dozen of the units are on order from regional health care systems while the device is being evaluated and tested by the FDA and other institutions.

It has been an unusual project for the machine tool builder during an unusual time. However, one of the larger points it illustrates is the value of not just manufacturing expertise, but having manufacturing as part of the community.

When I spoke to Mr. Janka about the collaboration with AquiSense and why he wanted to undertake the project, he expressed this simply. “We're a large, 800,00-square-foot manufacturing operation that produces CNC machines with very complex sheet metal enclosures,” he told me. “We have all the latest and laser cutting technology, welding, forming and 3D-printing capability. So we got a hold of Oliver and we said, ‘You know what? We can do this.’”

Check out the full interview below.