With the launch of a new application kit for collaborative robots, Universal Robots is creating a new option for lights-out machining. But the company may have tapped into a solution for a deeper problem: attracting millennials to the manufacturing workforce.

UR’s autonomous bin picking kit for machine tending applications is geared toward shops that machine bins of parts weighing up to 10 kilograms that are roughly the size of a fist, with CNC operations that include drilling, deburring, welding, trimming or tapping.

The road between our perception of modern robotic automation technologies and what we think of when we hear the phrase “bin picking,” is long and steep. It begins on some imaginary mountaintop at a sprawling, spotless modern manufacturing facility, and terminates at a lonely job shop in a lowland Rust Belt ghost town.

In other words, we know the complexity of what robots can do, but tend to expect that only simple robotic operations can occur in the shop.

But when we introduce automation and precision part placement into common bin-picking applications specifically for CNC machining, it requires us to change this perception. The technology and innovation that go into enabling collaborative robots, or cobots, to assume repetitive tasks such as stacking, sorting, picking and placing, is already complex. When you add vision technology and the ability to communicate with — and precisely place parts into — a machine tool, you multiply the complexity exponentially.

Removing complexity seems to be at the heart of Universal Robots’ new autonomous bin picking kit for machine tending applications, called ActiNav. Rather than programming waypoints and boundaries for the robot’s movement during pick-and-place operations, ActiNav enables the user to train the robot by holding its arm and guiding it through a series of key positions. This method of programming a cobot is not new. What is new is the ability for the programmer to use the robot’s vision system to learn the exact boundaries of the bin, the contours of the part, and the workholding dimensions within a machine tool that will allow for all processes from the bin to the finished part to become automated.

Jim Lawton, vice president of product and applications management at Universal Robots (UR), likens ActiNav’s teach-by-demonstration feature to teaching a young child how to tie their shoes.

The initial training of UR’s autonomous bin picking system is guided through a tablet called a pendant (being held here) with setup assistant software that walks the user through the cobot training process.

“When my son was little, I showed him how to tie his shoes by getting behind him and taking both of his hands to move them in position,” Mr. Lawton says. “It's the same way with a robot. You grab the robot by the wrist, and you tell it, ‘I'm about to move your arm.’ The arm can feel the pressure that you're applying while you move it in a certain direction, and it understands that you want to move it in that specific direction.” The analogy becomes more apt with the vision-guided bin picking technology. Shoelaces might land in random directions at first, and so do parts in the bin. The intuitive programming now makes it easy to for the collaborative automation to overcome this complexity.

The initial training is guided through a UR tablet called a pendant (think of a bulkier iPad) with setup assistant software that walks the user through the cobot training process. Through each step — from showing through the cobot’s vision system the precise depth and dimension of the bin, to teaching it the part shape, to picking the part, placing it inside a CNC machine and then removing the part after machining — the setup assistant generates waypoint programming that will allow the cobot arm to run autonomously after the training is complete.

Mr. Lawton says that UR’s new system addresses a critical gap for small-to-mid-size machine shops that until now have been locked out of using automation. “Think about how many smaller companies there are in the United States that are trying to compete with the Goliaths that are offshore,” he says. “They have been locked out of the benefits of automation because the stuff is too complicated and expensive, or it requires you to put up cages and 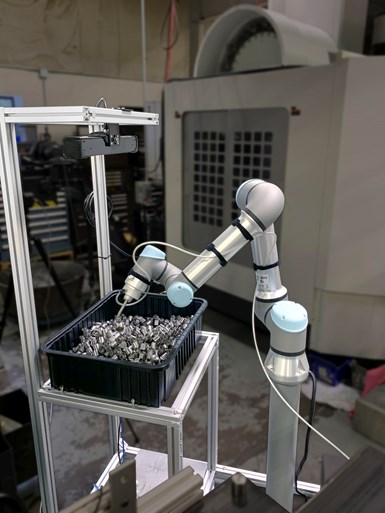 With CNC machines that can link to an I/O module, the module can communicate directly with the cobot to send important alerts.

take up valuable space on the shop floor.”

UR’s system is geared toward shops that machine bins of parts weighing up to 10 kilograms that are roughly the size of a fist, with CNC operations that include drilling, deburring, welding, trimming or tapping. From a communications and process standpoint, the interaction between the cobot and CNC machine can play out in two very different ways.

For newer CNC machines that can link to an I/O module, the module can communicate directly with the cobot to send alerts when the part is successfully placed, when the door shuts, when the machining operation is complete, and when the door is open and ready for the cobot to remove and reload the next part.

The second option is similar to what we saw at Bilstein America, where one of the company’s engineers made a novel discovery when faced with the possibility of having to hardwire the cobots into the central control system. The easier solution? Program a cobot to physically push the start button. Likewise, Mr. Lawton says, you can train the robot to open a door, or have the robot pay attention to when the machine light turns from red to green.

Mr. Lawton says that throughout either method, the communication between the sensor, the robot and the motion control module requires zero experience with programming. This, he says, may provide the biggest benefit of all.

“The typical worker in the United States in a manufacturing environment is getting ready to retire,” Mr. Lawton says. “And the people who are coming into the workforce look like millennials. If I go to a millennial and say, ‘Guess what? I want you to stand in front of a press brake all day,’ m﻿illennials don't want to be doing these jobs. So the key message that we've heard is that if there are tasks that are not particularly attractive for people to do, or there are tasks that robots can do, the more that I can automate, the better so that I can make the best use of the talent that I do have. It is much easier to attract that millennial who's interested in what is effectively interacting with an iPad to be a supervisor of robot technology instead of the more repetitive applications that we’re used to.”