Rick Steinard’s coolant is full of onions. However, there is no smell to speak of at his small CNC machining side business in Madison Heights, Michigan – not of onions, nor of rotten eggs, which might surprise many because Mr. Steinard never adds biocides. In fact, his metalworking fluid is formulated to kill bacteria (which causes the rotten egg smell when coolant sits in sumps for too long). “Maintenance is pretty much nil,” he says. “I check the concentration, but that’s about it.”

The key ingredients in this formulation are the aforementioned “onions” — specifically, sub-micron-sized particles of carbon known as “nano onions” that provide an alternative to bacteria-attracting chemical combinations for cooling and lubricating parts. Beyond reduced maintenance, Mr. Steinard says tool life increased by about 30 percent immediately upon switching from coolant to nanofluid. In some applications, the gain has been more than 100 percent. Parts are visibly smoother and shinier, including repeat work on the same machines with the same tooling and programming.

Most of Mr. Steinard’s work is in aluminum, but the nanofluid formulation was originally developed for more difficult-to-machine materials. Michigan Tool & Gauge, a prototyping and job shop in Howell, Michigan, reports similar results on an Inconel forging die application: visibly improved surface finish, and significant increases in parts per cutting edge. At 200 pieces per order, “We were going through a whole box of inserts,” says Jason Kile at Michigan Tool. “Now it’s just one insert, or maybe two.”

These relatively small shops are not the only manufacturers with eyebrow-raising stories about Tool-X, their metalworking fluid of choice. In fact, various plastic injection mold manufacturers and other, larger businesses declined to lend testimony to this article. However, one of the largest manufacturers of all, General Motors (GM), published a research paper last year that says the nanofluid is “ideal for tough-to-machine material such as heat treated gears,” citing improvements in chip control; flank wear and edge buildup (which are cited as good metrics by which to evaluate coolant performance); and surface finish. In one hardened steel gear-making application, tool life reportedly improved by more than 150 percent. 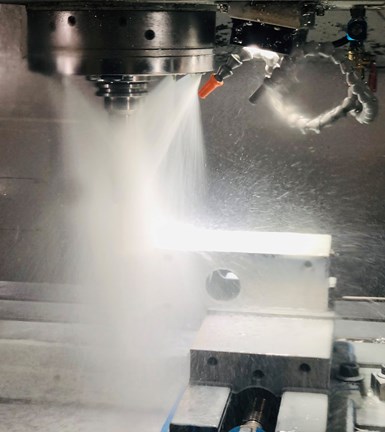 The nanofluid technology is not new. Its provider, Tool-X LLC, was formed in 2012. The essentials have not changed since then: Submicron-sized particles formed by exploding carbon cylinders and carried in an oil- or water-based solution flush heat from the cutting zone; smooth friction at the intersection of tool and metal; and polish surfaces. However, what appears to be changing is the extent to which this technology is practical and accessible for increasing numbers of machine shops.

Although Jim English is president of Tool-X, he does not call himself a businessman. “I’m a scientist,” says the former GM chemical engineer. As such, he was part of the team that first adapted the nanotechnology, which was originally used for wound-treating salves, to metalworking applications. Development was driven by interest from the Department of Defense (DoD) in its potential for materials such as titanium and hardened steel.

After initial success with DoD suppliers, capitalizing on the technology with manufacturers serving other sectors proved to be more challenging than expected. Efforts to spread the word paid off, but “we weren’t prepared to handle the demand,” Mr. English says, adding that many potential distributors feared that carrying the line would cut into cutting tool sales.

Rick Steinard says he was “floored” by the roughing finish on this triple clamp set for a motorcycle. Most of the 7075 aluminum was machined at 9,000 rpm and 220 ipm, which he says is “nowhere close to finishing speeds and feeds.” Image: SPI Racing Wheels

Things are different today, he says. For one, the company is expanding its distribution network. The first to represent Tool-X outside Michigan is Minneapolis-based Hexis, which extends the company’s reach throughout the upper Midwest. For another, the company now offers nanoparticle-infused coolant as a standalone, oil- or water-based product rather than a nanoparticle additive for existing fluids. This ensures testing and evaluations of performance do not depend too much on outside variables. “We also don’t hear any more stories about warranties being voided,” he adds.

Tool-X’s chemistry is relatively simple because the nanoparticles do all the work. As such, it is reportedly safer, more environmentally friendly, and more cost-effective to maintain – and, just as critically, to dispose of – than other fluids. “Most coolants have 30 or 40 different chemicals in them,” Mr. English says. “Ours has 12.”

The nano-onions that provide the performance gains are made of carbon, a material that is both highly thermally conductive and highly lubricious (graphite, a form of carbon, is a common ingredient in dry lubricants). The cores of the onions are hard, but their outer peels act much like sponges, essentially holding fluid and releasing it when compressed between tool and workpiece.

The cushioning slurry between tool and workpiece material becomes more effective as the nanomaterial breaks down under shearing forces. Image: Tool-X LLC

Onions are not the only nanoparticles at work. Microscopic ball bearings help replace the typical sliding friction of machining with a smoother, rolling friction, Mr. English says. Other particles provide the necessary biocidal properties. All of the nanoparticles also add to the cutting forces exerted by the tool, providing an effect similar to shot-peening that can harden, smooth and remove material accumulating on surfaces. Meanwhile, their combined surface area forms a lubricating, heat-removing, buildup-preventing slurry between cutting edge and workpiece material, as depicted in the diagram above.

Although results are immediate in most cases, the full impact of nanofluid cannot be evaluated until shearing forces begin to break down the nanoparticle “peels.” The peels shed particles of graphene — one of the most thermally conductive materials on Earth — into the surrounding fluid to increase the total volume of nanomaterial. As the volume of nanomaterial increases, so does its total surface area and, by extension, the cooling and lubricating effect of the cushioning slurry.

Mr. Steinard’s experience with Tool-X extends beyond his own small machine shop, which has always been a side business. He has spent most of his career designing and selling cutting tools for a major carbide manufacturer. After being impressed by a test of the fluid at a customer’s facility, he contacted Mr. English. Before long, he was not only using the nanofluid in his own shop, but also recommending it to potential customers, even providing samples donated by Mr. English for test cuts in some cases.  “It was another tool in my bag,” he says about the fluid. “They’d say, ‘Wow, Rick’s tools are the greatest,’ but a lot of that was the cutting fluid.”

Now, his only work with cutting tools is using them in his own shop, which remains a side business. As for the performance impact, “I do these little spark plugs in tool steel with a little solid carbide trepanning tool,” he says. “Before I was getting 30, 40, maybe 50 pieces per edge, but now I get 200 or 250 without changing the tool.”

However, his biggest money-maker is his own product: wheels for remote control cars, which he machines in batches of a few hundred at a time and sells under the brand SPI Racing. Thanks to Tool-X, “they look like chrome” right off the machine without manual polishing, he says.

However, the wheels do not require the level of surface finish that Tool-X helps provide. The case is the same for other projects, he says, adding that he is not discerning in terms of work. Keeping the doors open is enough for him, because, as he puts it, “cutting metal is in my blood.” Nonetheless, nanofluid runs in every machine not due to cost savings in comparison to coolant, he says, because it is not a coolant. Rather, he runs it because it reduces the overall cost of manufacturing, and because it helps satisfy an innate desire for quality on every job, regardless of the required specifications. “I’ve been doing this for 40-something years now, and this is paradigm-shifting technology,” he says.