A new metal AM system for batches of end-use parts was designed to permit productivity and machine pricing comparable to a CNC machine tool.

The Desktop Metal Shop System 3D prints metal parts at a rate of up to 700 cubic centimeters per hour, translating to hundreds of parts within a six- to 12-hour build. In pricing and pacing, the additive machine was designed to complement CNC machine tools and find its applications within machine shops.

This is a different and plainer evaluation of the role and effectiveness of AM than this process is usually subject to. More typically, the qualification for it as the chosen production process is seen to be part designs that cannot be produced some other way — designs that leverage AM’s freedom to generate internal features of the part, intricate geometries such as lattices, and complex forms such as topology-optimized shapes. This is a limited application set. AM can’t compete for a broader portion of mainstream production applications until its speed and price justify its use over and above any geometric benefits. 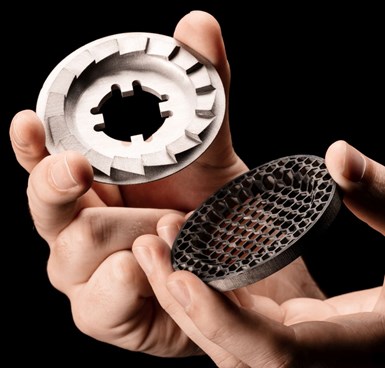 The clutch plate seen in the right hand is an example of a part produced through binder jetting on the Shop System.

At the this year’s Formnext show in Frankfurt, Germany, the world’s leading trade show for AM technology, Desktop Metal debuted its “Shop System,” which it says aims to bring production additive manufacturing into CNC machine shops by offering speed and cost comparable to the pacing and equipment pricing typical of CNC machining. The machine’s build rate of up to 700 cubic centimeters per hour translates to hundreds of parts (depending on size) within a six- to 12-hour build or 70 kg of parts per day. The starting price for the smallest model, with a build capacity of 4 liters, is $150,000. Larger models are available up to 16 liters.

Both the speed and price figures come with qualifiers. Completing the printed metal part from this machine requires a furnace for sintering, which adds hours to the lead time for a batch of parts and about $80,000 to the total system price. Still, this is production metal-additive technology in the range of what manufacturers pay for production metalcutting equipment. 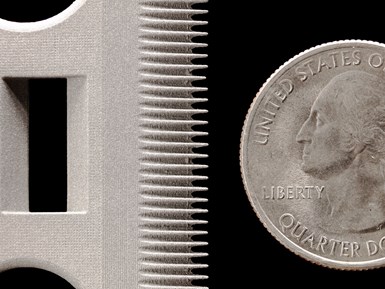 This detail of a component made through binder jetting on the Shop System illustrates the level of precision attainable. Resolution of the binding agent that bonds the metal for sintering is 1,600 by 1,600 droplets per inch.

The AM process the Shop System uses is binder jetting. A binding agent bonds metal powder layer by layer, producing green parts that attain their final hardness and density in sintering, with no melting of the metal involved. Unbound powder supports the parts during the build, meaning there are no support structures to remove after 3D printing and parts can be nested in all three dimensions of the build volume. Parts produced in this process feature properties comparable to casting, the company says, except for part density and geometric precision — both of which exceed what casting usually achieves. Surface finish after 3D printing and sintering is 4 microns Ra. Smoother surfaces and/or fine dimensional tolerances come from performing secondary processing on the part, most likely machining.

“This is a metal additive machine for use on the machine shop floor, near CNC machine tools,” says Jonah Myerberg, Desktop Metal co-founder and CTO. The machine-tool-like cost is, in part, the result of a machine design that is simplified relative the company’s more established, faster and more automated Production System, which is aimed at larger-scale additive production. With the Shop System, operators wear personal protective equipment when cleaning the machine or refilling powder — but not when operating it. Mr. Myerberg puts this in context by noting that the personal protection requirement is less than that of other processes routinely performed on the shop floor, such as welding.

For machine shops, one important potential application of this capability is as an alternative to casting. Machining lead times are often hostage to the lead times from foundries delivering cast parts. With production metal AM in house, the shop can print its own near-net-shape parts as the parts are needed, without any lead time from an external supplier.

Except that this solution can do casting one better. Printing rather than casting as the near-net-shape process means there is no tooling involved, and parts can be produced with geometries that might be impossible or impractical to realize in any other way. When the AM machine can compete for production opportunities on speed and price alone, the additional opportunities resulting from an additive process come as an added benefit.