Advanced Tooling Inc. owner Tom Pankratz says that his company’s investment in Transor filter systems, including this V series, has been a major contribution to his company’s success.

Tom Pankratz started Advanced Tooling Inc. (ATI) in 1996 in his Mt. Calvary, Wisconsin, garage. With a vision to manufacture state-of-the-art cutting solutions, ATI rapidly outgrew the garage and set up shop in the old Mt. Cavalry firehouse. In 2007, ATI moved to a new 20,000-plus-square-foot shop that to this day enables the company to supply its customer base. 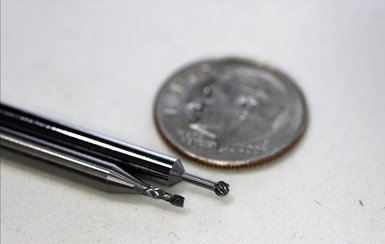 Initially, the company focused on larger tooling. According to Pankratz, customer demand drove ATI to expand its offerings to micro tooling. The company now makes a variety of tools ranging from a 1.25-inch solid carbide end mill to a 0.625-inch solid carbide end mill and a 0.015 four-flute ball. ATI’s new shop is organized in order to handle that variety of tools with maximum efficiency.

“Each OEM has its niche,” Pankratz says. “In the micro tool section, we have all Rollomatics, while our larger tool division has Walter-series grinders and quite a few Anca-series grinders. We’ve also just recently purchased an FX7 and a TX7, the new linear machines from Anca.” Pankratz also pointed out that the dedication and professionalism of ATI machine operators really maximize his investment machine technology.

ATI recently purchased an Anca TX7 as part of its ongoing investment in new technology.

The Missing Piece of the Puzzle

During his initial research into opening ATI, Pankratz realized that in order for him to gain a competitive edge in the industry, he needed to look at all the pieces of the grinding puzzle. “It wasn’t just about the machine tool and the grinding wheel, but also the type of oil, filtration and temperature control,” he says

As the company grew, filtering out carbide became a bigger issue. “It was messy and extremely labor-intensive to clean out the old systems. I knew we needed cleaner oil to make the best tools and that chilling the oil is extremely important to keep the heat out of the carbide, to keep the cutting edge there and minimize cracking,” Pankratz says.

In 1996, Pankratz met Transor Filter USA President Irv Kaage at the EMO exposition and discussed how a Transor filter system could be the technology ATI needed to sustain its growth. “When we looked at the Transor, it seemed to check all of the boxes that we needed to keep our business growing, so that’s why we decided to try our first system,” Pankratz says. ATI’s first purchase was a two-vessel unit servicing just two or three machines. An additional three-vessel unit and then a six-vessel unit followed.

Pankratz quickly realized that Transor’s patented One Micron Filtration (OMF) system was providing significant benefits to his operation. He saw an immediate impact on cycle times. “The more grit that you have in the oil, the more it collects on the wheels, clogs up the diamond, makes it rub and creates heat,” he says. “With the Transor, the clean oil eliminates the buildup of debris on the wheel, keeping the diamond freer to cut faster. In addition, having temperature-controlled oil provides a consistent cutting environment. I would say on small tools you’ll gain 10-20% cycle time and on large tools, 20-30% cycle time.”

Transor’s modular V series was designed specifically to expand as a company’s business grows. The heart of the V series is the filter module, which consists of three filter vessels, a pump and the required plumbing to support three machine tools. Additional filter modules can be added as new machine tools are brought online. The V series also features a refrigerant system and an automated sludge handling device for easy handling of debris sludge for reclamation or disposal.

Transor introduced this concept to ATI as the company was looking to purchase several additional units. “The modular concept of the V series was ideal,” Pankratz says. “That really appealed to me. The V series was a great solution, as we didn’t have to spend all the money upfront. Since it is expandable, we were able to start with several filter modules and then, as we needed more capacity, we just put another module in place. Because all plumbing and electrical is integrated, installation was incredibly simple, and we were online in less than a day.” 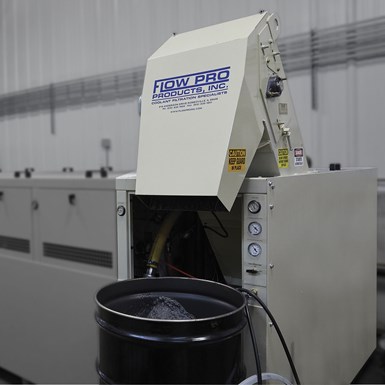 Pankratz went on to discuss how they installed the V series in an area adjacent to the machining area. “It really keeps it quiet,” he says. “The big feed pumps are on the other side of the wall. It also keeps the shop incredibly clean. Right now, with the Transor system, it’s kind of out of sight, out of mind. We really don’t worry about them.”

Pankratz continues to appreciate the easy maintenance of the Transor units. He says that the automatic emptying of the sludge into the filter bag for disposal was a better system for his company compared to methods that require cleaning dome cartridges or paper rolls. “Now, with the V series automatic conveyor, there really is no maintenance to it at all. I mean, it really cleans itself,” he says.

According to Pankratz, the Transor system’s filter elements do not need changing often. He says his company has gone as long as eight years without changing them. Also, ATI no longer has to clean the bags out of the smaller systems because the V series’ conveyor system automatically puts the sludge in a 55-gallon drum. “When that’s full, we move it, we put an empty one there, and we’re done cleaning the system,” Pankratz says.

Another advantage of the centralized V series with automatic cleanout is that it enables easy and profitable reclamation of carbide. “Right now, we’re reclaiming 8,000 to 10,000 pounds of sludge per year, and it literally takes us 15 minutes to change a barrel over,” Pankratz says.

“With all the many benefits of OMF — temperature control, improved cycle times, reduced maintenance and carbide reclamation — our investment over the years in Transors has been a major contribution to our success,” Pankratz says.