A Lincoln College of Technology machining instructor details the most useful features of Mastercam — his school’s software of choice.
#casestudy 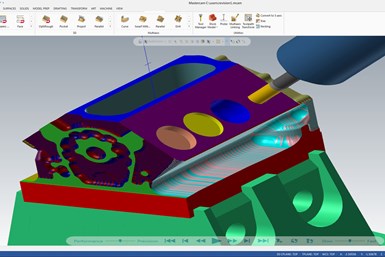 Lincoln College of Technology students use Mastercam for in-process verification of an engine block during bore roughing. 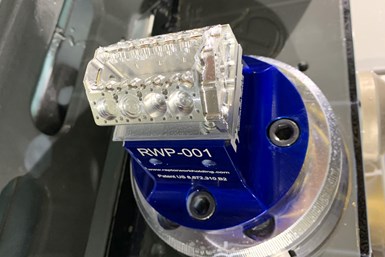 The engine block was machined during the advanced multiaxis machining class.

One institution that is benefiting from a recent upswing in technical school enrollment is the Lincoln College of Technology in Indianapolis, Indiana. Its CNC Machining and Manufacturing program is home to the Gene Haas Center for Advanced Automation, which houses CNC machines from Haas Automation. Students enrolled in the school’s 10-month manufacturing program learn programming and machining skills while taking part in class projects that include building experimental components for race cars.

“Students are not coming here to land entry-level jobs and stop.”

“They want employees who can set up the machines, run parts and do their jobs,” Long says. “Students are not coming here to land entry-level jobs and stop. Many want to take that next step to programming. That’s why CAM software is such a big part of what we do.”

Lincoln Tech’s CAM software of choice is Mastercam. The school has 40 seats of this program spread across two computer labs. “If you can program Mastercam, you can program just about any software out there,” he says. “It is really streamlined and easy to use.” 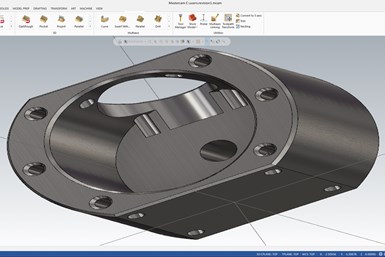 This air compressor housing was designed and machined in Mastercam. 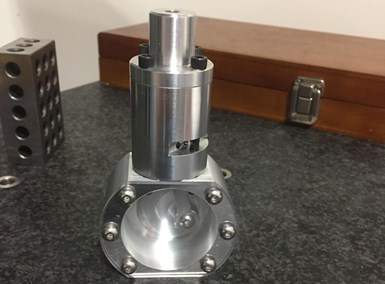 Ease of use is particularly important for special projects, such as a hand-cranked air compressor, which is made of several parts, including a handle, feet and various tight-tolerance internal components.

“We could never produce these 11 parts in 10 days without the software,” Long says. “We don’t give students solid models for this assignment, just a set of blueprints. They programmed, set up and ran the parts in 10 days.”

Students find plane creation control in Mastercam particularly intuitive, he says. Another feature students tend to pick up quickly is Dynamic Motion toolpaths, which they employ mostly for pocketing and surfacing operations. Compared to a traditional cutting toolpath that uses only the nose of the tool, Dynamic Motion uses the full flute length for more consistent tool wear and extended tool life. This results in more parts that can be cut with the same tool, which adds up to significant cost savings.

With so many available options, choosing a toolpath can be challenging for some students. “What works for you, especially on the geometry creation side, is based on the way your mind works,” Long says. “Some people like to think in parallel lines, but others would rather draw in place. Mastercam allows people to have different ways of thinking. Toolpaths are no different.”

One toolpath that is popular among students is Opti Rough, a bi-directional cutting strategy that removes large amounts of material quickly via Dynamic milling motion. Large, aggressive cuts are followed by fast, smaller up-cuts to deliver a fully roughed part safely and quickly.

The curriculum for the CNC Machining and Manufacturing program includes 10 classes (see sidebar). Each class meets for 20 days, 4.5 hours per day. During the CNC mill setup, programming and operation class, students learn to longhand-program a mill, set it up and run parts. It is a lot to learn in 20 days, and most students will only retain basic editing abilities, Long says. However, understanding longhand helps students understand how Mastercam generates codes when they begin to program in CAM.

Similarly, in the CNC lathe setup, programming and operation course, students learn to longhand-program a lathe, a task that is made easier by canned cycles. “One of the things I like about the CAM software is that you can actually output your turning codes in canned-cycle format,” Long says. “You can program canned cycles within Mastercam. Being able to make those selections to put out a code that students can read through makes logical sense to them.”

Another class, Mastercam for the mill, covers program use and functions, drawing tools, and Dynamic toolpaths. From optimized pocketing to highly specialized toolpaths, with Mastercam Mill, parts can be produced faster and with greater accuracy, quality and reliability. A favorite feature among students who take this class is Raster to Vector, Long says. Located under the Wireframe tab, the feature allows the user to pull an image into Mastercam and create geometry from it.

To better engage his students, Long uses the software features in creative ways throughout his courses. For example, he challenged one group to engrave their signatures on metal parts. The students signed their names on pieces of paper, photographed the signatures, and pulled the images into Mastercam via Raster to Vector. The software then generated geometry from the images. Students programmed the machines and machined their signatures onto parts within minutes.

For another project, students in the modern milling, drilling and workholding class produced fishtail gages from 1/8-inch-thick aluminum. The piece featured engraved gradations and 60-degree angles. “To longhand it would probably take weeks,” Long says.

“Why would you longhand something like that when Mastercam exists?”

In the workplace simulation course, students rotate through different job roles to gain exposure to the various tasks associated with manufacturing work.The goal is to use what they’ve learned over the past 10 months to make parts. According to Long, some classes have made more than 600 parts in 20 days (12 different parts) for an actual company, which provided the material. The students provided the programming, setup, running of parts and quality control.

Mr. Long says 90% of last fall’s graduates found jobs. He attributes this success to the technical college’s job-shop like atmosphere and realistic simulation of a manufacturing workpiece. “By the time you finish our last class, if you’re not already in the workforce — and most of our students are before then — now you’re ready to go,” Long says. “That’s the goal.”