CNC Machining As A Prototyping Technology

Designcraft has many more machining centers than additive devices. Here is why. 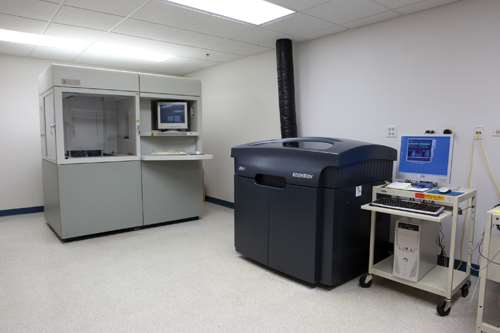 This photo inside the 3D printer suggests the variety and detail of the parts this process can generate.

A view of the shop floor at Designcraft shows the investment the company has made in CNC machining. Just about all programming is done on the shop floor, at the CAM stations visible here.

This stamped part wasn’t actually stamped. Instead, it was milled from a solid block on a CNC machining center. The part has a uniform thickness of 0.012 inch, just like the sheet-metal production part eventually will. Milling out the thin part allows the shop to produce functional parts long before any dedicated stamping tooling exists.

Jobs at Designcraft that begin with “additive” modeling often proceed to CNC machining, so that the product-development process can include prototypes that are not just tangible but also functional.

3D printing can even produce moveable assemblies. This fully moveable bike chain model was produced as a single unit in a single 3D printing cycle.

To many, additive technology is practically synonymous with rapid prototyping. An additive process such as 3D printing—in which CAD data are used to effortlessly generate a detailed and tangible physical model by building it in layers—would seem to offer the ideal way to obtain a prototype part.

Indeed, Larry Happ, president of Designcraft, sees 3D printing as well as stereolithography as being essential to his company’s work. Designcraft is a firm in Lake Zurich, Illinois that is dedicated to product development. For this company, one of these two additive technologies provides the starting point for practically every new job.

Yet the company has only two additive machines, one for each of these processes. By contrast, it has nine vertical machining centers. After any job moves beyond the “fit and feel” stage of prototyping, CNC machining typically provides the most effective prototyping technology for realizing the next step—namely, parts that offer not just fit and feel, but also the functionality of the end-use product. At Designcraft, machining is the technology that carries prototyping the furthest.

That promise of functionally equivalent prototypes even extends to parts that eventually will require high-cost tooling such as molds or dies. The speed, stability and precision of Designcraft’s machining centers (from Creative Evolution) permit quick and accurate machining of thin-wall parts—including milled hog-outs that are intended to replicate stampings made out of sheet metal. (See bottom photo to the right.)

CNC machining, in fact, remains the most accurate process for producing most 3D features. Even some additive parts get machined. Of the company’s two additive devices, the 3D printer from Objet is capable of generating detailed parts more quickly, while the stereolithography machine from 3D Systems produces parts that have properties closer to what a plastic part will have in full production. In cases where material properties are an important consideration for a part that also requires fine details, stereolithography might be used, but the part might also be machined. The company routinely uses machining centers to engrave serial numbers on stereolithography parts, for example.

The question of material properties actually points to one further advantage of making prototypes with CNC machining. It might seem an obvious point, but on these machines, the choice of materials is practically limitless. The material just has to be tough enough to be machined. CNC machining centers, therefore, can produce functional prototypes not only from metal, but also from plastics, woods or synthetics. Taken together, all of these advantages of CNC machining reveal why Designcraft has invested so heavily in this approach—despite the barriers that machining presents.

Those barriers, for a design-related firm, essentially come down to the challenge of having the right personnel in place.

Machining centers need to be programmed, for example. Each job also has to be set up and run by someone knowledgeable about machining. Personnel resources of this sort are fundamental to any production machine shop, but they are not necessarily part of a prototyping firm. The firm has to choose to cultivate those resources.

Cultivating them is exactly what Designcraft has done. The machining employees are often grown from within. While at least one skilled employee who is now succeeding at the company was hired directly out of a production machining environment, Mr. Happ says hiring from this background actually has not succeeded for the firm in most cases. The company’s work of making unproven and often vaguely defined parts in tiny quantities differs considerably from the work of optimizing a repeatable production process for a part that has an established design. As a result, the more successful employees at Designcraft have tended to be hires who show a knack for machining, but haven’t ever been shaped by the experience of full production, Mr. Happ says. One wrinkle, though, is that the company is increasingly being pulled closer to production work.

“A growing number of our customers want us to get into short-run manufacturing,” the president says.

He thinks the recession at least partially explains this. Businesses are trying to make up revenue lost from their major product lines by exploring “minor” product lines instead—developing products for previously unexplored market niches. For these smaller markets, it takes longer to determine what the market demand truly is, and whether the demand justifies committed production. Designcraft is therefore asked to continue making machined parts while the customer figures this out.

Thus, using CNC machining as a prototyping technology also offers this one additional advantage: With machining, as Designcraft is demonstrating, the product-development phase can be prolonged to fit the customer’s need.

In fact, the product-development window can be closed gradually instead of decisively, with the machining work morphing seamlessly into the initial production needed to enter a market and establish a presence. When the prototype parts are also functional parts, a manufacturer can wait to commit to full production until it is fully ready to do so.