Continuous Improvement Must Be Continuous

It’s easy to do the work to improve your facility and then want to sit back to see how things go. Unfortunately, this leads to complacency, which is hard to overcome.
#leanmanufacturing 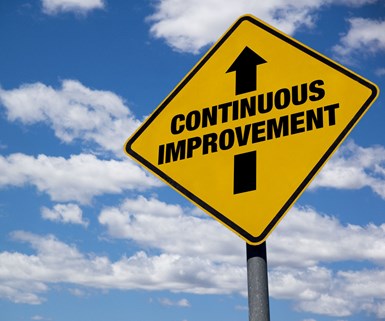 Companies that commit to continuous improvement may wonder at times whether they have reached a point in which they have done enough to meet both their needs and the needs of their customers. After having expended a great deal of time and effort reorganizing a plant, implementing a new enterprise resource planning (ERP) system, installing the most technologically sophisticated machine tools, or tearing down and rebuilding a key production process, the tendency may be to sit back and see how things go. The problem is that this is the first step to complacency, and once this sets in, it is very difficult to reenergize a continuous improvement effort. As the foundation of continuous improvement relies on “continuous” action, this is what is needed all the time.

While some companies have done a lot to improve their operations, they may not be as extensive as the examples above. Yet, they have made the need for improvement part of their culture in which they have improved their prior improvements. Such companies are on the right path to continuing success.

I have been fortunate enough to witness many “improved improvements” during my time working with companies of all types, and I would like to share a few interesting examples.

One company always recognized the need for a well-organized workplace. Early on, the company recognized the benefits of organizing all of the hand tools required to set up its CNC machines. Setup carts were designed to hold the necessary tools. Each cart was standardized using visual location identifiers. The carts worked well and reduced setup time through elimination of the long-standing tool search practice. However, within a short time, maneuverability became an issue as more machines were added. Also, some of the tools the operators thought were needed turned out to be dust collectors. Rather than give up on the setup cart concept, the cart was redesigned to be smaller, with fewer tools and more maneuverable. This new cart worked well, but was still somewhat inconvenient to use. The next improvement involved a change in thinking. The cart was eliminated in favor of a shadowboard attached to each machine. Each standard shadowboard contained about a dozen tools. Once again, there was an improvement in machine setup time as the new shadowboards made it even easier to access the tools needed. Today, there is further improvement. The shadowboards are still attached to the machines, but are smaller, have fewer tools and are in an even more convenient location.

Another company’s management team practiced a daily walk through the plant to review each department’s performance metrics. This lean daily management approach proved valuable in the company’s continuous improvement effort. One of the toughest parts of this practice was the selection of metrics that accurately reflected a department’s performance, while being controllable and easily reportable by the department employees themselves (key factors in ensuring employee ownership of the results). Although the initial metrics were valuable and provided a path to corrective action, there was no consensus that these metrics best represented the various departments’ performance. Other iterations of metrics were introduced over time, each receiving greater levels of support from all involved. Today, the company is using its second, third and fourth generation of metrics, depending on the department. With each newly agreed upon metric, consensus and ownership have grown. It is likely that even better metrics will be identified in the future in this continuous improvement focused company.

In a third company, the best means of tracking safety compliance was always under scrutiny. The company had traditionally employed a Lost Time incident report as its sole safety metric but was not convinced this was sufficient to ensure that everyone in the plant was working safely all the time. In search of a better metric, the company tried to capture near misses in the workplace, but found employees were reluctant to point fingers at others or admit their own mistakes regarding unsafe practices. Seeking something better, the company enhanced its safety audit program. Completing more frequent safety audits with a focus on potential safety hazards, taking immediate corrective action on hazards found, and posting the results of each audit in the plant has increased safety awareness and reduced the risk of injury, which are the ultimate objectives of any safety program.

So, are we there yet? Unless we are responding to little ones in the back seats of our cars, the answer has to be, “We’re just getting started.”