The Jakob spindle protection system is designed to shield shock-sensitive spindle components such as bearings from the potentially damaging forces of a spindle collision. 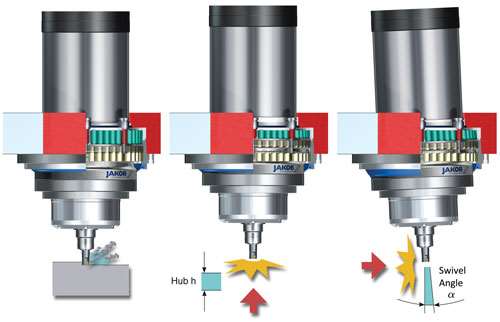 This cutaway reveals the internal arrangement of preloaded springs and magnets that enables a spindle to react to a collision without damage, and then return to its original position.

Loading the player ...
Spindle collisions happen, despite various strategies to prevent them or limit the damage they cause. This damage can be costly. An expensive cutting tool and holder may be ruined; a workpiece scrapped. Spindle bearings may need to be replaced along with other repairs. The unexpected downtime for these repairs causes lost productivity and disrupted job scheduling.
Jakob Antriebtechnik (Kleinwallstadt, Germany) has introduced a collision protection system that is being marketed in North America by GAM (Mt. Prospect, Illinois). This system, which is installed by the machine tool builder at the factory to its standard spindle offering, is designed to reduce transfer forces by decoupling and disconnecting the power transmission at the interface between the machine tool headstock and the spindle motor during a collision. This protection is effective whether the impact is radial (the spindle strikes something from the side) or axial (the spindle hits something head on). When impact is from the side, the protection system enables the spindle to “tilt away” from the blow. When the impact is head on, the spindle can be “pushed in.” When either type of “disengagement behavior” begins as a result of a crash, built-in displacement sensors instantly trigger a controlled but rapid deceleration of the feed axis, thereby bringing it to a stop before an overload occurs. This instant reaction protects shock-sensitive spindle components from the potentially damaging forces of the impact.
Developers at Jakob based the design of the system on a double-flange configuration that creates integrated damping elements to absorb the surplus energy of a collision. An arrangement of permanent magnets and preloaded springs mounted between the flanges provide “give” (displacement) that enables the spindle to tilt away or be pushed in when sudden impact forces exceed a preset limit. The spindle motor is screwed to an outer ring of the protection system at the spindle’s flange. An inner ring, in turn, is located within the outer ring, which is screwed to the headstock of the machine tool. According to developers, the precise geometry of the rings ensures accurate positioning of the inner and outer rings and thus the location of the spindle motor. The relative movement between the inner and outer ring is recorded at three points on the circumference in the axial direction.
The magnets and springs can be adjusted to establish the force and torque load limits that activate the protection system when exceeded. Different limits can be set for radial and axial loads. Mounting forces as high as 18 kN in the axial direction and tilting moments as high as 2,300 Nm (in case of a radial load) can be reached. After responding to a collision, the spindle returns to its initial position within a tolerance less than 5 µm, developers say. The system’s cover and seals keep out dust particles, chips and liquids.
Developers at Jakob say that this spindle protection system should be used in conjunction with other strategies for preventing spindle collisions or mitigating their effects. These strategies can include CAD/CAM simulation, electronic sensors and, most importantly, the operator’s adherence to safety practices.