Datanomix’s Fusion software led J&W Swiss Machine to a 13% increase in cycle-time conformance and a 1.5 day improvement on its on-time delivery.
#casestudy 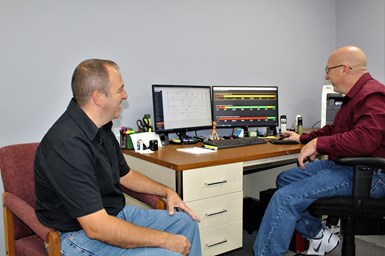 Jim and Wayne Langlois (co-owners of J&W Swiss) review the prior day of production. Photos courtesy of Datanomix.

Since December 2019, J&W Swiss Machine has used Datanomix’s Fusion production intelligence software platform across its North Grosvenordale, Connecticut, facility. With visibility into its production equipment data, the machine shop can troubleshoot and course-correct the day’s production challenges as they unfold, and can plan and optimize its future workload with more precision.

“As a 24-hour, Swiss-turning shop, it is all about efficiency for us,” says co-owner Jim Langlois. That means everything — procuring materials, setting up jobs, running machines and preparing shipments — must be efficient. “If we are able to be very efficient in every aspect of our business, it helps us win more work more consistently,” Langlois says.

Established in 2013, J&W Swiss Machine provides a wide range of precision-machined parts serving the aerospace, medical and commercial manufacturing markets. The company produces high-quality and difficult-to-machine parts while meeting or improving cost and delivery targets for its customers. Consistency and efficiency are the key components to success — being able to hit a dimension or tolerance over thousands of parts is about controlling the fine details of the process.

According to Jim Langlois, he and co-owner Wayne Langlois have been in the industry a long time, and they have always been believers in using data to improve the company’s processes. In fact, he says that when they saw how much the Fusion software knew about their jobs, specifically, they knew the tool could really help their business.

“We’ve had systems in the past that could tell efficiency — things like utilization, when the machine is on or off — but this system is much more intelligent than that,” Jim Langlois says. “It has benchmarks for each job around cycle time, utilization and parts per hour. It knows our jobs as well as we do. We also really liked the fact that the Datanomix Fusion system does not require anything from our operators. The data we are getting helps our operators focus more on running their machines, rather than taking them away from running their machines.” 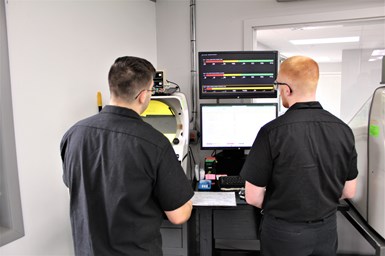 Datanomix’s﻿ Fusion is a hands-free, plug-and-play solution that is accessible from virtually any device with secure cloud access. It is designed to give on-demand access to critical insights in a few clicks. By establishing a data connection to machines communicating via industry-standard protocols like MTConnect or IO-Link, Fusion automatically tracks actual production by part and machine, setting a benchmark for expected performance. To measure performance against expected benchmarks, it uses a letter grade scoring system from A+ to C- across all jobs. A score of “B” means that the job is running as expected on a particular machine. In other words, “B” is the benchmark. Each score change is roughly half a standard deviation from the adjacent performance level, so for example, a “B-” would be half a standard deviation off the benchmark and “C+” would be a full standard deviation below expectations.

J&W recently put this system to work on a new part that had a fairly complex setup. Although the job went into production after it looked like things were dialed in correctly, the company expected that the part might require more oversight than normal because of its complexity. While parts were produced at 80% of the expected rate, the Fusion system flagged it as falling short of the benchmark and located the problem as stemming from high variability in part-to-part cycle times. Upon further examination, J&W Swiss discovered the operator had needed to readjust the dimensions of the back work every few parts, which put on-time delivery at risk. The senior leader reworked the program to take a different approach to cutting that particular dimension, getting production back on track the next day. Without the Fusion system’s feedback, the operators at J&W would not have had the context to know the severity of the issue they were facing, and would have taken longer to find the problem and adjust. 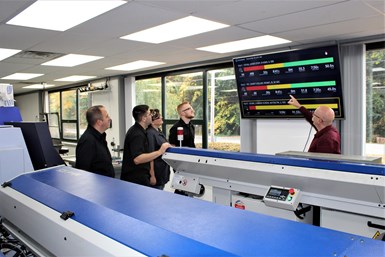 Jim Langlois at J&W uses Datanomix Fusion as the backdrop for the morning production meeting.

J&W Swiss has two giant TVs that have been running Fusion’s TV mode since the afternoon the company connected its machines to the software. In TV mode, displays mounted on the shop floor rotate through the performance metrics of every connected machine, identifying which machines need assistance and why.

“We are able to see all the details of how the jobs are doing,” says Wayne Langlois. “We are very focused on making sure we produce to our target cycle times so we hit our part counts at the end of the day and uphold our delivery promise. The production scores and the additional metrics let our whole team see where we’re running ahead or behind and where to focus attention now. We don’t wait for counting parts at the end of the day anymore to know if it’s been a good or bad day. This is the way of the future. If you don’t understand the data as a shop owner and employee, you’re going to have a hard time competing.”

Datanomix CEO John Josephs says that J&W Swiss is such a leading shop because the company and its owners think differently when it comes to data. “Jim and Wayne are focused on how to leverage data to improve every single part of their business and to think strategically about the company’s expansion,” he says. “They’ve embraced the future of using production intelligence to dramatically increase performance on the factory floor, gain awareness of activity and have access to critical data that unlocks efficiency and growth opportunities.”

Since installing Fusion, J&W Swiss has seen a 13% increase in conformance to target cycle times, which it estimates has improved its on-time delivery by 1.5 days on average, and its overall factory throughput has increased by 15%. According to the company, it has increased customer satisfaction and unlocked available capacity to bring in more business on its existing equipment.