On December 8th, the USMTC released its monthly report on machine tool orders. The report showed that December was by far the best month for machine tool sales in 2009. Both December unit and dollar sales were at their highest level in 2009. 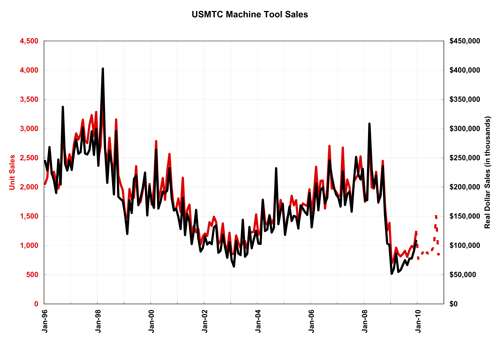 The chart Machine Tool Units and Dollars shows the 12-month rate of change for machine tool units and dollars (again, the dotted line is my forecast). I have supplemented the USMTC data with historical data from the MQ35W report created by the federal government. Here we see that both units and dollars have bottomed. The dollar curve bottomed lower than the unit curve, indicating a significant oversupply of machine tools and a lack of pricing power for suppliers. I expect this situation to correct itself during 2010. We’ll know that has happened when the two curves are once again tracking each other almost exactly. This chart shows that machine tool sales are still contracting but that they are doing so more slowly.

To forecast machine tool sales I look at two leading indicators. The first is an average spending per plant for the next 12 months that we compute from our Metalworking Business Index (MBI). The chart MBI Avg. Spending vs. Real USMTC Spending shows that future spending plans bottomed in January 2009. Since that time future spending plans have increased slowly. Real spending on machine tools according to USMTC lags the spending expectations from the MBI.