Design the Parts Around the Process

To guarantee that components for a new helicopter could be readily produced, the company looked at the capabilities of available machine tools in the market first, and then finalized the design of the components accordingly. It created a Precision Components Technology Center to embody this concept as a process for R&D prototype work. What has emerged is a flexible production model that can be duplicated at its other facilities. 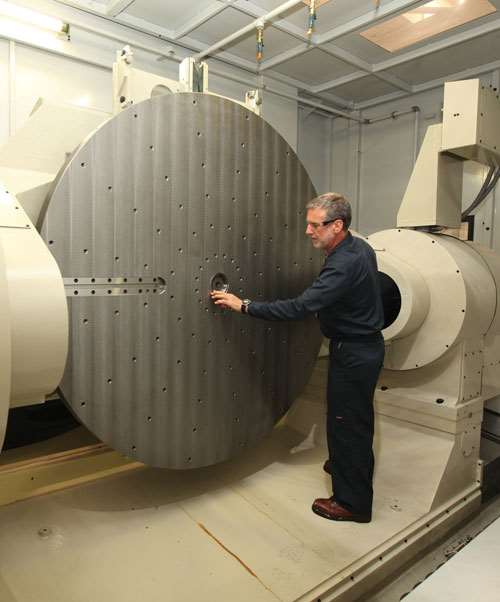 Wayne Wentworth, an applications engineer from Mitsui Seiki, stands in the work area of the 2,000-mm, five-axis machining center. The table he is touching was custom-engineered to accommodate a rotating swashplate component that is 78 inches in diameter.

This is the semi-finished 66-inch-diameter main rotor hub mounted in its fixture on the pallet base of the largest of the new five-axis machining centers.

The main rotor sleeve, shown here fixtured for a deburring operation, was redesigned as a monolithic part to reduce weight. The more complex configuration is still producible on a five-axis machine.

The table on the pallet load/unload station also serves as the fixture base, a solution to overcome bearing sag when the table is in the 90-degree position with an extra heavy load.

The automatic pallet transfer system accommodates 24 pallets and allows the machines to have “zero” setup capability – they can run while parts and fixtures are being loaded/unloaded. Mitsui Seiki integrated this Fastems system with its three machining centers.