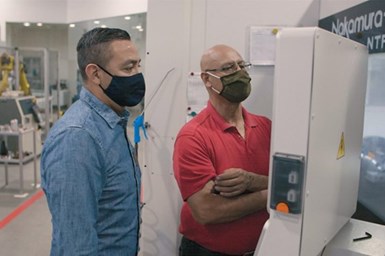 Wet Design streamlines production by performing all its processes in house. Esprit helps the company stay on track for tight deadlines across its many machines.

If you’ve ever scrambled for a prime spot to watch the Fountains of Bellagio in Las Vegas, stopped to rest at the fountains at Salt Lake City’s City Creek Center, enjoyed the Cauldron of the 2002 Winter Olympics or even the fountain of the 2014 Winter Olympics, you’ve enjoyed the work of Wet Design. The southern California company was founded in 1983 by former Disney Imagineers. It creates artistic water features that regularly push engineering technology to its limits with each installation including a vast underground network of complex parts.

In order to bring its creations to life, Wet Design manufactures an array of parts as diverse as its machines, including valves, robotic nozzles, electronic controls, underwater lights, molds and tooling. These parts are primarily made from stainless steel.

For the last 12 years, Wet has relied on Esprit CAM software from DP Technology. Wet first turned to the software to support its programming needs for mill-turn machines.

“We program our parts with Esprit and we can make them with minimal editing because the posts that Esprit provides are tailored to each specific machine,” says Oscar Ramirez, senior CNC programmer at Wet. “Before Esprit, we had to do a lot of editing and manual programming to get the machine to make the parts we needed. Esprit was the solution because I wanted our focus to be on the machining aspect and more effectively planning our schedule in advance rather than spending a lot of time trying to get a project to come out right.”

Wet keeps its processes in house, forcing it to simplify designs to reduce manufacturing costs. When it can’t further simplify designs, it relies on four- or five-axis machines. What’s more, keeping work in house means Wet needs to remain flexible.

“Our project priorities can turn on a dime,” Ramirez says. “For example, we make parts for our service department, and those take priority. We have to be very agile.”

Wet used this feature when it needed to increase production of a complex spider part. The part features three windows and looks like a 6-inch steering wheel with a small square window in the center. Wet used its Nakamura mill-turn with a simultaneous five-axis tool path to produce the window features, which have chamfers with variable angles. At the beginning of the project, Wet could meet the demand for the parts with just one machine. However, the assembly rate improved when the assembly shop added a second shift, so the company needed to add a second machine to increase its daily spider production.

“We already had the tool path, so we swapped the machine setup in the software to a Haas machine with a trunnion and made a couple of changes to the process. We then had two different machines running the same part with the same five-axis tool path,” Ramirez says. 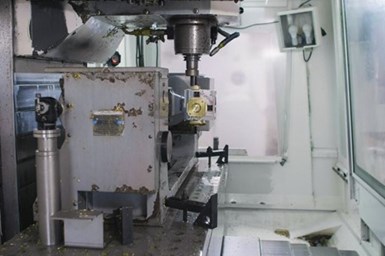 Ramirez says Esprit software has helped Wet save time in many ways. In one case, the company was using a CNC mill and a CNC lathe to produce a 12-inch “skillet” part made of 303SS barstock. The production process required two long setups, two machines and two operators to run. To improve efficiency, the company decided to make a new program in Esprit to combine the operations and run them on the Nakamura mill-turn in one cycle. Ramirez estimates that this move saved about three hours of setup time while freeing up an operator.

Ramirez says that if his team ever encounters an obstacle, he can count on Esprit's customer service, which usually responds within a day to his team’s questions.

“We’re a project-based company, and sometimes the timeline to develop, produce and deliver is very short. While we always have a couple of very big projects on the horizon, we expect to get many smaller projects as well,” Ramirez says. “As a result of the short turnaround time, we have to constantly keep improving our methods and techniques so we can accommodate these projects, support our existing projects and keep growing. Esprit plays a vital role because we get great tool paths and the code is correct.”