Implementing a multitasking machine with new CAM software enabled setup and production time reductions for the shop. One part even went from a setup time of 6 hours to 5 minutes. 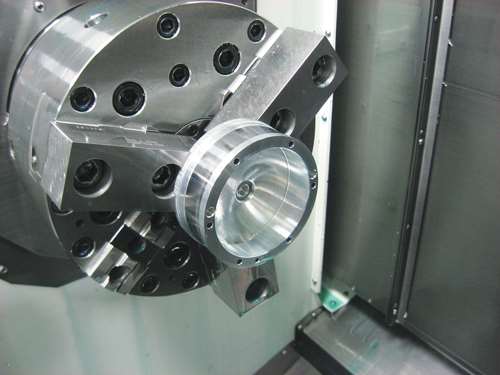 The grip cup is shown completed on the front side, ready for transfer to the subspindle for backside operations. Previously made with two lathe operations and one mill operation, the production time was cut in half by using the dual-spindle Integrex, saving 36 minutes per part, plus more than 3 hours of setup.

A final machining operation to complete an Instron grip body is displayed within GibbsCAM’s Cut Part Rendering, which is used to verify tool paths while programming or after completion.

Todd Card, Instron first shift senior NC machinist, sets up a job on the Mazak Integrex. Because Mr. Welch prefers to keep the machine’s carousel loaded with tools for machining aluminum, it takes Mr. Card no more than 5 minutes to set up a job, unless a chuck change is required.