Close attention to detail and automation of key processes is helping this shop earn its place as a leader in the 3D printing industry. 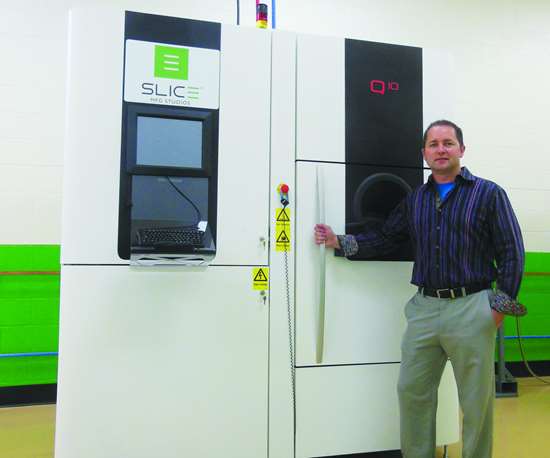 Slice COO Michael Rappach says the company’s objective is to be the leader in the industry as a pioneer for the best practices in 3D part production.

This system is set up for automated blasting of the acetabular hip cups. The cup is articulated around the blast field so that all surfaces are blasted evenly, creating 100-percent uniform surface roughness.

While the Swiss machines are not used for machining of 3D printed parts, they produce many related components.

The Willemin-Macodel machines are set up with automated parts handling. The robot grabs the hip cup for measuring on the laser system and relays the information to the CNC to call the correct program.

Every shop owner wants his company to eventually be at the top of its game, but it’s not uncommon for new companies to first try to gradually establish themselves before going for the gusto. After all, bringing in the best personnel and equipment, producing high quality parts, and landing important customers are obvious goals that, when combined, can lead to high profitability and long-term success. But these things can often take time to achieve.

In the medical field, developing such a reputation can take even longer, as customer requirements for precision and cleanliness are typically the most demanding. But one company has opened its shop, initially serving the medical field, with the main objective of setting the bar for the highest production standards. A significant part of its operations is centered around additive manufacturing, and the steps the company has taken to ensure a top-level facility are remarkable. 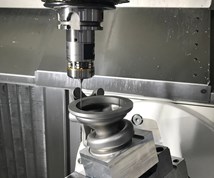 Randy Theken (pronounced “taken”) is the founder of Theken Companies LLC, which includes Slice Mfg. Studios. As an engineer developing devices for the past 25 years, Mr. Theken’s biggest frustration was finding reliable contract manufacturers that could think outside the box, deliver in a timely fashion, and offer all the required services under one roof. Slice Mfg. Studios was founded to address these concerns.

The goal now is to make Slice a pioneer in the production of 3D printed parts, including the best processes possible for cleaning, powder handling, safety and all other aspects that many companies take for granted in this arena. Michael Rappach, chief operating officer at Slice, says, “Many shops have a lot of CNC equipment and then throw a 3D printer right on the shop floor just because that’s what they think people want. We’re trying to set the standard for part production with 3D printing as a separate operation.”

The company takes a lot of extra steps to ensure successful handling of its 3D printing processes. An atmosphere-controlled, Class H1 explosion-proof room was built to house the 3D printers—currently two Arcam EBM (electron beam melting) machines, but with plenty of room for growth. Mr. Rappach says volatile materials such as aluminum and titanium powders pose a significant explosion risk. Simply plugging something into a wall outlet could be enough to set off a flash explosion, so special outlets have been installed, and the 3D printing operations are separated from the other machining. For additional safety, copper rod runs around the perimeter of the room and into the powder recovery room. When an operator is working on a machine, whether it’s open or even if he’s only moving components around, he is tethered to the grounding rod to take the static energy out. Rather than the typical sprinkler system, a halon gas system is installed in the ceiling for fire suppression. And beyond fire safety, for employee health concerns, the HVAC system includes special filters, and operators wear suits and masks to protect them from the powders, which at 20- to 100-micron particle size, can quickly get into the atmosphere.

To reduce contamination risk with the parts, Slice uses strictly titanium with its current 3D printers, although as the need arises for other materials, the company is prepared to add additional dedicated printers for that work. Mr. Rappach says using different materials within the same printer would present relentless cleaning qualification challenges with the FDA. It is important in medical work to qualify the build process, including the powder that is in the machine, the gun, the filaments, and so on. Changing the material would require an extensive revalidation process; going through several small test builds, with chemical, fatigue and tensile testing and detailed documentation, this could take as long as a month.

The Birth of a Part

Mr. Rappach says his company is one of only a few in the U.S. running Arcam machines, which are mostly applied in aerospace and internal medical device companies. The EBM system replaces the laser or thermal print head with an electron beam, most typically to produce dense metal parts. “The decision between EBM and laser comes down to the part. Both systems have their advantages, and 3D printed parts need to be designed for the intended system,” Mr. Rappach says.

The printers at Slice are geared more toward production work than they are for prototypes. Setup can take six to eight hours, including extensive prep work such as cleaning and maintenance necessary to qualify the machine, alignment of the beam and a preheat warming cycle to get to the correct temperature. “EBM machines are a different mindset,” Mr. Rappach says. “A lot of job shops are looking to 3D printing for one-off prototypes, making parts quickly and easily. We are using the technology for production of parts that cannot be created any other way.”

During the build process, a layer of powder is spread inside the chamber. The full chamber is under vacuum, filled with helium. The powder is preheated to semi-solidify it. The end product is a brick of powder that has already been heat treated and annealed during the printing process (as opposed to laser 3D printed parts, which have residual stresses after completion and are heat treated afterwards). The part is then ready for its next steps.

Once the powder brick comes out of the machine, it goes into the next room to run through the powder recovery system (PRS). In this blasting cabinet, the brick is blasted to get the parts out of the 3D print build. The powders from the build are collected, and a sample of the powder is tested for chemical composition. Several random pieces from the 3D build are also tested to make sure the printer is not burning off more of any one element, which could cause lower chemical makeup in the finished part relative to the correct makeup in the powder.

All of the powder that comes off of the build is put in a reblending to have it recertified. Slice is currently not reusing the powder, but the goal is to work toward a better understanding of how much of the material and chemical makeup has burned off and how to compensate for that accurately in a reblend.

Slice was set up with a good mix of turning and milling machines along with the 3D printers. Swiss machines are typically key components of a medical shop, and this requirement is filled at the company by three Tornos Technologies U.S. Corporation GT 26 CNC Swiss turning centers, along with a high production Tornos EvoDeco 32. While these machines are not associated with the production of any of the 3D printed parts, they do serve to create corresponding parts such as screws, along with unrelated components for other applications. “We do complex machining, mill-turning, 3D printing,” Mr. Rappach says. “These jobs always come with a screw or an instrument that needs to be used with those components, and the Tornos machines provide the capabilities we need for that work.”

Directly related to the company’s 3D printed parts, though, is a lineup of several Willemin-Macodel, Inc. 508 MT machining centers with turning capabilities. Medical 3D printed parts require significant finishing, and these machines serve this integral role. Aside from the engineered surfaces that are specifically related to the 3D printing, all other surfaces need to be finished, polished or touched in some way outside of the printer.

Currently, one of the primary 3D printed parts at Slice is a line of acetabular cups for hip replacement. In other shops, this part is often forged, then machined after forging. The finished part would then have a coating glued or plasma sprayed on it. Because that coating is not homogenous to the substrate underneath, it could eventually delaminate and wear off from the micromotion within the implanted body. By 3D printing the part, the surface texture that can be created eliminates the need for that additional coating and better promotes bone growth in, under and around the cup for better adherence.

Each Willemin machine is set up with a robot to handle automated loading and unloading of the parts. One includes a carousel system with 12 rotating trays that can each handle 24 of the acetabular cup components (total of 288). The robot grabs a component for initial measuring on the laser system. That inspection is looking for the initial roundness of the 3D printed part and concentricity to the spindle. Second, it tracks the size of the component, which it relays to the CNC to call the correct program for machining. This capability allows different part sizes and configurations to be loaded on the carousel at any given time.

The mills can turn around about 100 cups a day, including a lights-out shift. But the 3D printing is currently the bottleneck in the process, producing only 100 cups every three days. As production requirements for these parts or demands from outside clients increase, the company will add more printers.

After manufacturing, the parts go through rigorous quality processing to ensure a flawless end product. Each part is labeled with specific identifying information to serialize what point in the build it comes from. This tracking is essential for further quality steps. Each part goes through non-destructive testing for elemental makeup. Another machine is used for destructive testing of the powders, which are heated to their melting point and the gases are analyzed for percentages of elements. The company also has several MTS machines for tensile and fatigue testing of samples out of every 3D print build.

Once the parts are verified, they pass through an air lock to a Class 10,000 clean room, which is humidity-controlled and continuously monitored for air quality, humidity, particles and debris. Here, the parts are sterile-cleaned and packaged, ready for shipping to the customer.

Slice continues to try to set itself apart from other job shops by implementing the most advanced processes and highest standards in its additive operations. Having recently opened the doors to outside customers and hired two sales people, Mr. Rappach is anxious to see where the market will lead. He sees upcoming opportunities in aerospace, automotive and semiconductor applications. The company has plans to add at least two more printers in the first quarter of 2018 and will not hesitate to grow its operations further to suit demands.

The acetabular hip cups shown here are currently being anodized by an outside firm. Why are the parts anodized? Mr. Rappach says, “Because we can.” Most medical implanted parts are anodized for color coding to identify a size. But forged or cast titanium parts have a plasma-sprayed or glued coating on them that cannot be anodized. The 3D printed parts, however, have no foreign matter on them, so they can be anodized to follow suite with the screws and plates and other complementary components in that environment.