The San Francisco startup is changing designer lighting with a designer-forward online marketplace and just-in-time delivery enabled by 3D printing.

Style has a lead time problem. Take a look at the nearest table lamp—maybe it’s got classic curved lines with a brass finish; maybe straight edges with an industrial vibe; maybe translucent plastic for soft, diffused light. Whatever the case for that particular lamp, chances are it wasn’t designed recently. It’s likely that an industrial designer created the concept of that lamp based on projected style trends several years before it was first manufactured, shipped and sold at retailers. Even if the lamp at hand is brand new, it has been years in the making.

Why? One reason is that consumer goods like lamps largely still depend on tooling, and tooling takes time. That plastic lamp for instance required an injection mold, and converting the designer’s vision into a mold that could make something close enough to that vision took time and money. The molding itself probably took place overseas, adding more time to the process. The manufacturer probably made more lamps than were sold, which have become wasted inventory. And by the time the lamp was placed on that table, it had been completely divorced from the designer who originally conceived of it.

The separation between design and delivery, and between designer and consumer, is a problem, says Ian Yang, founder and CEO of Gantri, headquartered in San Francisco, California. From the customer’s perspective, there’s no way to convey to an industrial designer what worked or what didn’t about a particular design. And from the designer’s perspective, there’s no way of knowing whether one’s work was successful.

“You want the product to cater toward customer needs, and the best way to learn this is when you have a product in the market,” Yang says. “The design industry is so slow because it doesn’t have that feedback loop.” With Gantri, Yang is out to complete that feedback loop for consumer goods—specifically, luxury lighting. Using 3D printing for production and an algorithm-based approach to inventory, Gantri is bringing designers closer to consumers through an online marketplace.

Conventionally, lamps and other consumer goods are designed well in advance of when they will be sold and purchased. Gantri offers a different model, with 3D printed luxury lamps like this one.

The Gantri model is a bit like Etsy — but if Etsy manufactured all the goods on its site on behalf of its crafters. The company is not a design firm or a brand that employs designers, nor is it a service bureau that offers 3D printing broadly. Instead, it’s a platform that provides designers with the tools they need to create and sell luxury lighting in a much more artisan fashion.

Gantri owns the 3D printing and postprocessing equipment, and sources materials and standard lamp components such as switches and sockets in bulk. But the lamp styles are completely determined by what designers can dream up, given these raw materials. Individuals or design firms can submit lamp designs through an online portal, then work with Gantri engineers to prototype, finalize and quality-check the product. When all parties are satisfied with the results, the lamp becomes available for sale through the Gantri online storefront, with the designer’s name and profile clearly displayed on the listing.

Each lamp listing includes the designer’s name clearly displayed, with a link to his or her profile including other Gantri designs.

Designers own the IP to their design, which Gantri then licenses to produce the products. Gantri handles manufacturing, postprocessing and shipping, and designers earn royalties for each lamp sold. The model gives consumers insight into who has designed their product and allows them to leave reviews and reach out to designers if they choose. Meanwhile, designers have a direct link to customers and the opportunity to build a personal brand and following around their work.

“We don’t want to be the brand,” Yang says of Gantri’s mission. “We want to be the technology solution that facilitates the connection between the designers and the customers. For a lot of these designers, they don’t have other outlets or other places to build their own brand. The products that they create on our platform are actually the first-ever product under their names.”

To increase productivity and expand build volumes, Gantri is converting its factory over to the Dancer, a 3D printer the company developed. (60% of the components for this printer were 3D printed.)

The online marketplace that enables designers to list their products for sale is one piece of that technology solution; 3D printing is another. All of Gantri’s lamps are manufactured at a factory in San Leandro which is equipped with a fleet of 100 3D printers as well as postprocessing equipment.

The company initially printed its lamps with off-the-shelf desktop models, but as of November 2019 has begun to shift production to its own 3D printer, Gantri Dancer. With four gantries that operate in concert and a build volume stretching to 24" in height, Dancer will enable the company to not only manufacture faster, but to manufacture larger items in one go, without stitching pieces together.

Gantri prints with two different corn-based PLA plastics developed by ColorFabb exclusively for this application, an opaque plastic used for the solid and colored portions of the lights, and a translucent material. The material has been formulated to withstand temperatures as high as 75 to 80°C; this is higher than typical PLA, Yang notes, but necessary to cope with the heat generated by a lamp.

Printed translucent pieces are sanded and treated with a UV protected coat; colored pieces are primed and painted. The postprocessing steps take one and a half to two weeks, on top of up to two weeks of print time. Production lead time for Gantri lamps is currently about four weeks; with these faster Dancer printers, the company estimates that this will drop to just two. 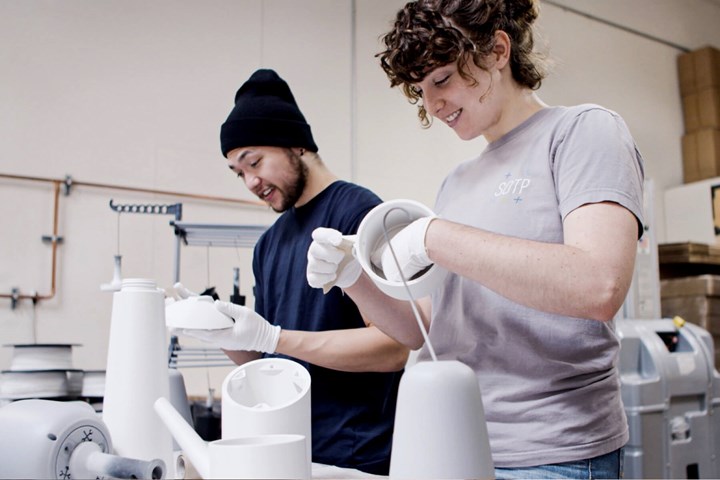 Once a customer buys a lamp through Gantri’s website, the order will typically ship within a week. How can a lamp be delivered in less time than it takes to print and postprocess it? This is possible because Gantri largely is not manufacturing on-demand, but something more like near-on-demand. 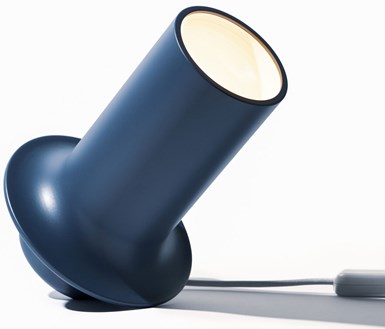 It takes up to four weeks to print and finish a Gantri lamp, but customers typically don’t need to wait that long to receive their order. An intelligent algorithm ensures inventory is produced in advance for just-in-time delivery.

“Customers expect an experience like two-day Amazon shipping,” Yang explains, “so what we actually do is a mixture of on-demand and preproduction to facilitate this just-in-time delivery. When someone orders an item that’s not in stock, we do make it for them to-order, but that’s maybe less than one-third of our orders.”

Gantri’s inventory is thus managed by an algorithm that runs every hour, creating projections for the next four weeks and automatically scheduling jobs to printers. The algorithm makes it possible for Gantri to pre-produce the majority of lamps just before they are needed. This algorithm also helps the company avoid creating excess inventory that may not be sold, for a more sustainable manufacturing model. The company is working to automate production even further, by prioritizing parts based on length of print time, employee work hours and other details through additional algorithms.

A side benefit of bringing products to market to be made with 3D printing is that product development goes quickly, and iterations and adjustments are easy to implement. Since launching in 2017, Gantri has already launched more than 130 lamp designs and is actively working to add more all the time.

The company’s business model therefore allows for faster product development, but also better product development. Gantri designers have access to a dashboard that shows the cohorts of products customers are buying, the idea being that this information could help designers create lamps that better align with current customer tastes.

There’s also direct feedback from buyers that can help inform design decisions. Customers are able and encouraged to leave reviews and feedback for designers, which can then be used in future iterations. “Maybe a customer says ‘This diffusion is not bright enough,’ so the designer can work on a new version of that same product and launch a new one within a couple of months,” Yang says.

Yang says the company will expand production as well as add more materials and product categories in the near future. Doing so will also mean continuing to bring new designers into the fold, to create ever-better luxury lighting designs. With an established feedback loop connecting designer to consumer, and the flexibility of manufacturing with 3D printing, Gantri is demonstrating that style no longer needs to be based on conjecture. Designer products can instead be designed based on real trends, on a shortened timeline from concept to delivery.

When manufacturing is flexible and designers can respond actively to trends, style doesn’t have to mean years of lead time.