Pushing coolant through the center of a tool to the cutting area more efficiently cools the workpiece and lubricates the drill.

In most metalcutting operations, some form of coolant is necessary to reduce cutting temperature and tool wear. This has become especially important as spindle speeds have increased through the years. Today, virtually all CNC machines are (or can be) equipped with coolant delivery systems. The conventional approach is to spray the coolant, either at moderate or high pressure, directly onto the workpiece where the cutting takes place. However, this method fell short for Burr Oak Tool in Sturgis, Michigan.

The company was founded as a general machine shop in 1944, but it found a new direction in 1952, when a customer asked it to design and build a special machine to make condenser coils for air conditioning units. Today, with more than 300 employees and 420,000 square feet of floor space in three production facilities, Burr Oak Tool supplies special machines and tooling to users of air conditioner evaporator condenser coils in more than 70 countries.

Over the years, the company sought to continuously refine its processes to reduce cost and increase productivity. In the mid-1980s, it began experimenting with through-tool, high-pressure coolant delivery on its high speed steel drills.

“Using the traditional method of flooding the cutting zone wasn’t getting the job done for us,” says CEO Newell Franks II.

“We knew that the primary benefits of applying machine coolant were to control the temperature of the workpiece to allow faster speeds and feeds, as well as getting longer life out of the cutting tools,” says CEO Newell Franks II. “Using the traditional method of flooding the cutting zone wasn’t getting the job done for us. I knew that gundrills used through-hole coolant, so I decided to see what it would take to adapt that method to what we were doing. To get started, I reached out to our hydraulic component supplier and used some of its products to test my theory,” Mr. Franks says.

His theory centered on the fact that twist drills pull material out of the hole as they work, which means that simply spraying coolant at the work area allows only small amounts of fluid to drizzle into the hole as it works against the pumping action of the drill. Instead, he wanted to try forcing the coolant through the center of the tool to the cutting tool point so it could more efficiently cool the workpiece and lubricate the drill. As a bonus, he would learn that this action also flushes chips out of the hole, thus avoiding re-cutting, which can lead to premature tool wear.

During initial experimentation, Burr Oak Tool ran pressures ranging from 200 to 700 psi. It also used multi-stage centrifugal pumps to raise pressures to about 250 psi. The initial results were very promising, Mr. Franks says. After seeing positive results on the drilling machines, the company decided to turn its attention to the milling machines. It modified its milling cutters to pump the coolant into the pocket, cooling more uniformly, eliminating thermal shock and more effectively evacuating chips.

From Theory to Reality 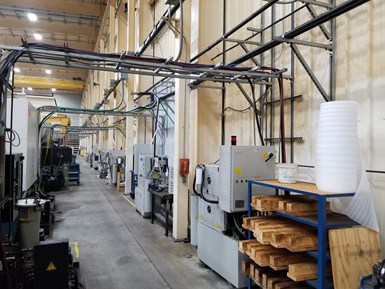 “When our experiments proved successful, we began looking for available high-pressure delivery machines,” Mr. Franks says. “We tried a few brands that didn’t perform to our expectations, and then we purchased our first ChipBlasters in 1994. We found that these units performed significantly better, lasted longer and required less maintenance. The LNS ChipBlasters allow us to run 1,000-psi coolant on all of our machines with coolant filtration levels of 1 micron. This combination has allowed us to turn hours into minutes and minutes into seconds when machining steel and aluminum parts,” he says. Over the years Burr Oak Tool has purchased 60 ChipBlaster high-pressure systems, adding one to each new machine it installs.

When the company first began working with ChipBlaster machines, it experimented with pressure and flow on various applications. By consulting ChipBlaster charts that listed the number of gallons of coolant that flows through various-size orifices at 1,000 psi, Burr Oak Tool realized that some of the larger drills and milling cutters it used would require greater volumes of coolant. The company then built special flow gages that mounted on the spindle or mill toolholder to measure precisely how many gallons per minute they needed to deliver and shared this data with ChipBlaster. 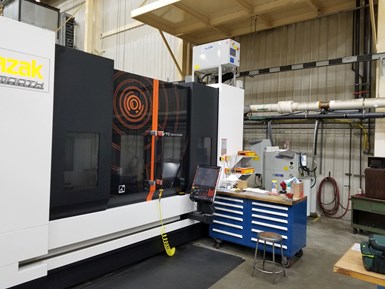 For one die part, which was run on this Mazak VMC equipped with the ChipBlaster high-pressure system, switching from a solid drill to a through-hole drill reduced production times from between six and eight hours to just 40 minutes.

One example of the benefits of through-tool high pressure coolant at Burr Oak Tool is with a stripper plate for a die that requires 3,200 holes drilled into 34-HRC 4140 steel. The holes are 1 mm in diameter and 6 mm deep. These are starter holes through which EDM wire is threaded. Originally, this process involved a solid drill and typically produced a number of broken drills and a lot of pecking. Using the ChipBlaster to deliver high-pressure coolant through a single drill enables the machine to create all 3,200 holes with no pecking. This coolant method, combined with using a speed head, cuts production time from between six to eight hours down to just 40 minutes.

Because applications like this one require drilling very small holes, the ChipBlaster units are equipped with 1-micron filters that eliminate tiny particles that could clog the small tools.

“When people ask me about how through-tool high-pressure coolant delivery helps our production, I tell them it’s as simple as this: With the right equipment, like the LNS ChipBlaster systems, we can cut steel like it’s aluminum and aluminum like it’s wood,” Mr. Franks says.