Custom macros provide access to many CNC-related functions through what FANUC calls system variables. This data includes, among others: 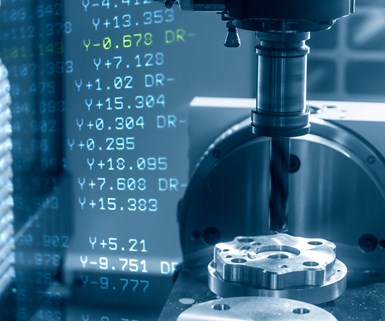 Traditionally, FANUC has required you to reference these data using a series of difficult-to-remember, four-digit numbers. Alarm generation, for example, can be specified with system variable #3000. The following command #3000=100(TOOL TOO WIDE) will generate the alarm “MC-100 TOOL TOO WIDE.” FANUC CNCs now allow you to additionally reference system variables by names. The name for the alarm-generating system variable, for instance, is [#_ALM]. All system variable names are enclosed in brackets and begin with a pound-sign and underscore (#_). This command [#_ALM]=100(TOOL TOO WIDE) will also generate the alarm just shown.

A second advantage has to do with system variables that provide access to numbered data, like offsets. Each data type has a rather arbitrary series of associated system variable numbers. With one popular machining center offset table configuration, for instance, FANUC uses system variables numbered #2201-#2400 to provide access to the tool length compensation geometry registers for offsets 1-200. Another set is used for the tool length compensation wear offsets (#2001-#2200). Other sets are used for the cutter radius compensation geometry (#2601-#2800) and wear offset registers (#2401-2600).

While there are algorithms that simplify the task of accessing individual offset registers, remembering which series of system variables is related to each type of offset data is difficult. And again, the system variable numbers will not be recognizable to people unfamiliar with custom macro. To make matters worse, the series or system variable numbers vary among FANUC CNCs and offset table configurations.

You have no control over system variable naming. You must find their predetermined names in the FANUC operator’s manual. You can, however, use the SETVN command to name 50 of the #500-series permanent common variables (#500-#549) with up to eight characters and numbers (the name must begin with a character). Once named, as with system variables, you can reference the variable by its number or name.