A new three-fluted drill designed for high production can improve the speed of drilling holes in steel by 50% while improving roundness and accuracy.

Making money in high-production machining is about making small changes that pay off big in the long run. Knowing this, it is no wonder that ears perk up when a company offers a drill that makes accurate, well-rounded holes quickly and without pilot holes. How do you accomplish this? For Iscar, the solution is deceptively simple: Add another flute to the drill.

The Logiq 3 Cham from Iscar is a three-fluted drill for putting blind and through holes in iron and steel alloys. The drill uses a replaceable drill head, with multiple diameters available for use on the same drill body. “Adding a third flute to the drill has several immediate effects,” says Craig Ewing, national product specialist in drilling for Iscar. “First, the extra cutting edge provides a 50% increase in material removal over two flutes. Second, the third flute improves the stability, which has carryover effects throughout the process.” 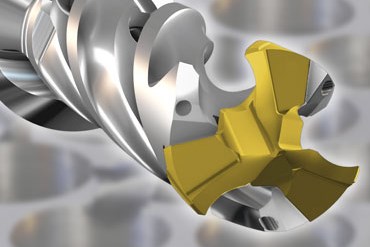 The Logic 3 Cham is a three-fluted drill from Iscar that marries improved stability to improved feed rates. Photo Credit: Iscar

The first benefit makes complete sense on reflection. An additional flute means 50% more cutting edges, which means 50% more material removed during a single rotation. The concave, hook-like design of the cutting edge creates smaller chips that evacuate quickly and easily thanks to the design of the tool shaft, ensuring consistent chip removal despite the crowding you might imagine adding a third groove would create.

A key benefit to the Logiq 3 Cham’s third flute is the added stability, according to Ewing. Just like a three-legged footstool is more stable than a two-legged one, a three-fluted drill is more stable thanks to the three points of contact with the part. “The improved stability leads to better roundness and improved accuracy,” he says. “This means a better surface finish and fewer holes out of tolerance.” The stability is further improved by the dovetail clamp with radial stoppers

The drill heads also have a self-centering point, which combines with the improved stability to enable users to put holes in steel without drilling pilot holes, even at angles. “The Logiq 3 Cham can drill holes at angles as high as 12 degrees without pilot holes,” says Ewing. “These holes have the same roundness and accuracy as those with a 0-degree offset.”

Drilling Down to Specifics

The Logiq 3 Cham is available in diameters ranging from 0.472 to 1.02 inches with 0.004-inch increments. The drill body is available in lengths 1.5, 3, 5 and 8 times the diameter, and Ewing recommends using it with through-coolant, as the major limiter to the length is chip evacuation. “The tool body is designed to make chip evacuation efficient,” he says, “but without through-coolant it’s limited to a depth of twice the diameter.” 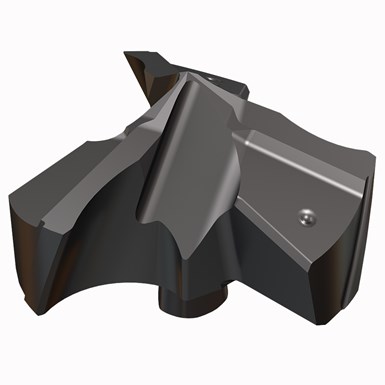 The Logic 3 Cham has a self-centering head that enables the user to put holes into steel without the need for pilot holes. This is even possible at angles as high as 12 degrees.

Iscar decided to use the replaceable drill heads to improve tool life, according to Ewing. “We know a lot of customers like to regrind their drills, but the geometries of a three-flute drill make that prohibitive,” he says. “Instead, we went with a replaceable insert that enables the user to quickly replace a worn head with a fresh one, lowering the cost of replacements and reducing the time to change it out.”

Additionally, changing out the drill is made easier by the stable dovetail clamping used to hold it in place. “You can change out the drill head with a repeatability of 0.002",” Ewing says. “There’s no need to touch it off. Just switch out the heads and get back to making chips.”

For more information about the Logiq 3 Cham, click here.