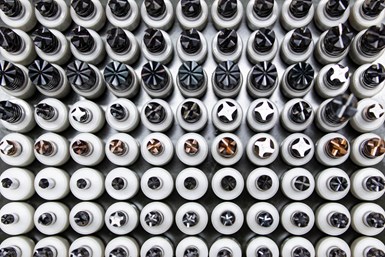 Automating the Programming in Regrinding

The value proposition of regrinding round tools is simple: If you can get extra life out of expensive cutting tools, then you can buy fewer of them. In practice, the calculus is more complicated. According to Andreas Sommer, product manager of FX CNC machines for ANCA, establishing whether a shop can benefit from regrinding is primarily a question of how many tools it goes through each day. “When a shop is setting up a secondary regrinding operation, it is vital to know if you are going to be servicing enough cutting tools to make it viable,” Sommer says. According to him, regrinding an end mill or similar cutting tool takes an average of five to six minutes. “At 10 tools per hour, most shops are making back their investment if they are grinding at least three hours a day. If this is not your main business, it is vital to weigh the costs and benefits.”

Automation for Low Volume, High Mix Production
Prototyping is the Path from Tooling to Production Work

“A reground tool should be just as effective as a new tool.”

Another part of that cost is this: Running a tool regrinding machine has traditionally involved finding and hiring a specialist in grinding cutting tools — significant added expense for something that is supposed to be cutting down costs. Now, automation systems have reached the point where regrinding can be accomplished without the expertise of specialists, changing the cost equation and increasing the number of facilities that can benefit from tool regrinding in-house. 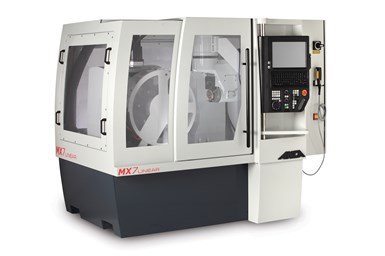 ANCA grinding machines like the MX7 Linear use the AMT measuring cycle to automatically adjust toolpaths to the needs of a specific cutting tool. This enables shops that do not have tool grinding experts on staff to regrind their round cutting tools. Photo Credit: ANCA

On ANCA machines, the ATM cycle drives both hardware and software automation. Measurement cycles automate the regrinding of square, ballnose and corner-radius end mills, as well as drills, step drills and compression routers. The cycle uses touch probes to establish all regrinding parameters of the cutting tool, including the OD, the end of the tool, the number of flutes, the index position of flute edges and flute length. Once these parameters are established, the system's software automatically adjusts the grinding path of the wheel to both regrind the tool as appropriate and compensate for imperfections.

“By automating grinding-path generation, we sought to eliminate as much of the difficulties associated with regrinding as possible,” Sommer says. “With ATM, the goal was for a machinist to do the work of a cutting-tool specialist.” The operator still needs to set the feed rate, wheel speed and number of grinding passes, but once that is set for each cutting tool the other adjustments are automatic. This dramatically reduces the time needed to program the toolpath and enables the machine to grind large batches of tools with minimal operator input.

Users set global parameters such as feed rate, while grinding path programming is based entirely on automatic measurement of the tool. This dramatically reduces the time needed to program toolpaths and enables users to implement further automation systems to great effect. Photo Credit: ANCA

A Spectrum of Automation

ANCA advises most machine shops that wish to develop in-house regrinding solutions invest in an automation solution to reduce the cost per cutting tool. The company’s pallet strips, for example, enable shops to group their cutting tools by size to improve the effectiveness of robotic loaders. Photo Credit: ANCA

According to Sommer, the automation of a regrinding solution should not end here. “Unattended regrinding is obviously preferable,” he says. “This is not a money-making aspect of business for machine shops doing in-house regrinding, so the fewer man-hours spent on it the better.” ANCA offers robotic-loading options with its machines, in various configurations. For shops developing an in-house regrinding solution, the company has a pallet solution in which the pallets have holes with pre-determined diameters to fit the tools being reground. Alternatively, the pallet can be divided in up to three strips, with each strip able to hold cutting tools of a different diameter. A single-pallet solution is especially effective for machine shops that regularly use similarly-sized cutting tools because they will be regrinding the same tools over and over and can do so while reducing robotic loading time. Ideally, at the end of each shift the used end mills can be loaded onto a pallet that gets loaded into the machine for unattended regrinding.

For tool service providers and shops that have a wider variety of tool diameters, the company recommends one of two other automation solutions. The first is a collet-loading system designed for small, mixed batches of up to 30 cutting tools, which is enough to run for three hours unattended. The collets come with a standard outer diameter for varying tool sizes, enabling the robotic arm to grab and load the tool and collet together. This is an entry-level solution the company offers on FX machines with AR300 robotic loading. Another automation solution uses RFID tags to keep track of the cutting tools, enabling the robot to identify each tool. With each tool diameter known through the RFID system, the robot can grab the tool and load it into the spindle individually, automatically changing the respective collets for each diameter. The capacity ranges from 88 to 176 cutting tools.

Evaluating Your Tool Use for Regrinding 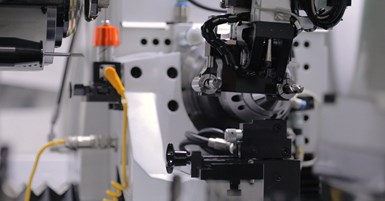 While CNC tool grinders are not standard equipment for most machine shops, advances in automation might make them more viable for a larger share of metalworking facilities. Photo Credit: ANCA

While these automation solutions make regrinding more accessible, there are still limitations to regrinding. “A reground tool should be just as effective as a new tool,” Sommer says. “Therefore, shops need to consider surface coating before they invest in regrinding.” Shops working with difficult materials such as titanium and hardened steel may wish to recoat cutting tools to return to full effectiveness. “In that case, in-house regrinding may be less cost-efficient than contracting with a dedicated tool-service provider,” says Sommer. 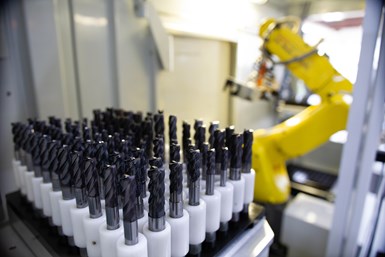 The combination of separate automation solutions – one for moving parts and one for generating toolpaths – is what makes this technology so effective. Both are time-savers individually, but together they enable shops with little background in tool servicing to set up their own regrinding stations in house. Photo Credit: ANCA

The upper limit on the size of the tool is dependent on the grinding machine’s work envelope. The largest ANCA machines can handle tools up to 16 inches long. The lower limit is less defined. “At the smaller end of the spectrum, regrinding is limited by the relative fragility of the cutting tools used in, for example, micromachining processes,” says Sommer. Additionally, the complexity and precision of passes can increase dramatically when working with very small tools, making programming more difficult, including more difficult to automate.

Another limiting factor: Cutting tools can only be reground a limited number of times. “We generally expect a tool to be reground two to three times,” says Sommer. All the savings is found here, because this represents two to three tools that don't have to be purchased. With the greater ease of use of regrinding and the greater possibility for performing this work in-house, further savings might now come from not having the send the tools out for this service.