Mornings at Richards Industrials start with a daily huddle, an informal but structured meeting that enables the team on the shop floor to review data about machine performance as well as share ideas for avoiding or solving problems.

As every serious dieter knows, taking the pounds off is hard enough. Keeping them off can be another matter. At Richards Industrials, a leading supplier of specialty valves for chemical, pharmaceutical and food processing customers, staying “lean” has been a constant objective for well over a decade, ever since the Cincinnati, Ohio, manufacturer began its earnest effort to implement the techniques of lean manufacturing. “We have good habits in place,” says Bill Metz, vice president of operations and engineering at Richards Industrials (formerly Richards Industries leading up to the acquisition of the company by an equity firm in 2019), “but we have to watch ourselves carefully. It can be easy to slip and let excess setup time or work in process start weighing you down. It can catch you by surprise.”

As the 2017 Top Shops Honors Program winner in the shopfloor practices category, this shop’s focus on lean manufacturing is not surprising. Nor is it surprising that Richards recently honed its lean manufacturing skills, especially in the area of operations and process improvement, by sending 30 members of its 70-person shop force to a three-day training session with Definity Partners, a Cincinnati-based training and consulting firm.

“One of the concepts that we initiated from this training was a daily huddle meeting, so our team on the shop floor can identify problems as they crop up and discuss timely solutions. The key is catching things early and trying to fix them while they are still small,” Mr. Metz explains. One of the company’s engineers or one of its sales people joins the huddle at least once a week to bring their perspective, he adds.

Mr. Metz noted that these daily huddles are not free-for-alls. “The meetings begin with a review of production numbers and machine utilization data from our machine monitoring system. You start with the facts and then get creative,” he says.

Richards’ early adoption of machine data collection also was an important factor in its Top Shops award. The shop began installing a system from Forcam in 2015. It continues to provide useful intelligence about shopfloor efficiency. For example, Mr. Metz describes a recent huddle to discuss why results from the first and second shift on a certain machine were not the same, as indicated by the data. “That was the starting point. The intent was simply to help the shift operators learn from one another,” he reports. 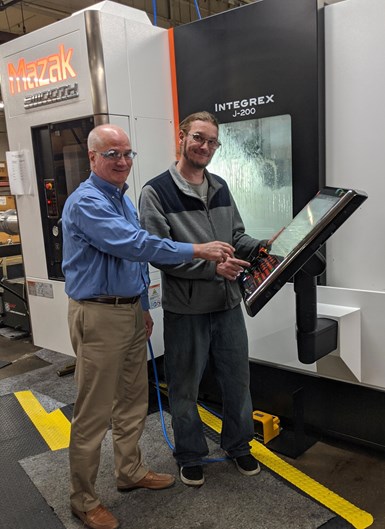 “We also recently discovered that an operator on a Haas machining center was overlooking the value of getting the machine running, and only then handling some routine outside-the-machine tasks. With some simple refresher training, we had the problem solved,” he says. “Again, the lesson here is that getting away from basic lean manufacturing habits can be easy.”

He does point to one ongoing frustration: “We are still working on the goal to go entirely paperless shop-wide. We’ve had a few false starts.” The hold up, he says, are some manual operations that require operator entry for labor reporting. “You have guys working hard, and this reporting task just feels counterproductive,” he explains.

Having a strong shop culture is an asset that the company values highly and protecting it is an ongoing priority, Mr. Metz says. For this reason, he notes that having shop data, whether collected automatically from the machine monitoring system or entered by the operator manually, has to be regarded by all with the right understanding. “We look at the numbers, but we also listen to one another. You need the personal context to make nuanced decisions that not only result in a tangible improvement, but also feel right to everybody. Nothing’s cut and dried,” he notes. 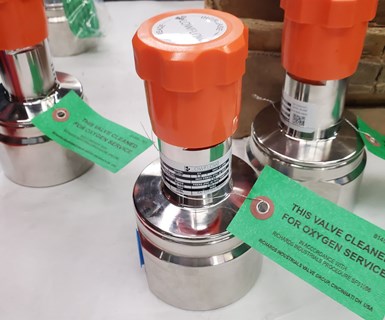 Richards Industrials was able to assemble and test these valves in about three hours one afternoon and have them driven to Saginaw, Michigan, that evening so test stands for checking medical ventilators could be completed overnight. The next day, the test stands were delivered to an automotive manufacturer that had shifted production to the much-needed ventilators.

The recent COVID-19 pandemic provided an example of good will and teamwork making a difference. “We had to move some operators to different stations to fill in gaps when only a skeleton crew was on the floor. One of our best operators went to the paint line and pitched right in — no hesitation and no grumbling. All of our guys would have done that.”

Mr. Metz made the point that recognizing Richards’ strength in shopfloor operations has to be balanced against the company’s ongoing investment in machining technology. “You can be lean, but you have to have some real muscle, too,” he says. The latest acquisitions are a five-axis Okuma machining center and a Mazak Integrex in the bar-turning cell. The latter machine is notable, he points out, because it has 36-position tool turrets. “That’s an advantage in minimizing setup and speeding changeovers — two of the basic lean objectives we first learned and still have clearly in mind,” he says.