Kuka Demonstrating that Mobility and Collaboration Are Converging in Robotics

Mobility and human-robot collaboration are robotics trends that, according to Kuka Robotics President and CEO Joe Gemma, are not only accelerating but also converging. 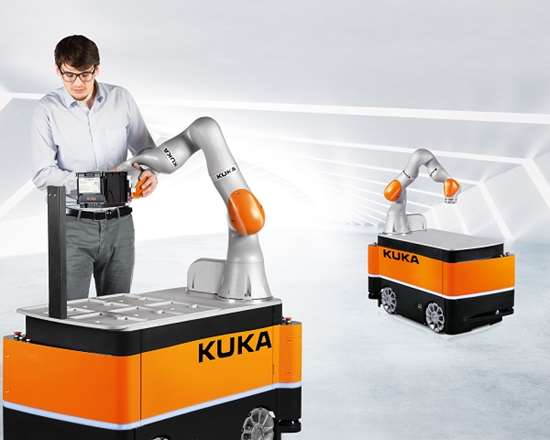 Mobility and human-robot collaboration are two accelerating trends in automation, according to Kuka Robotics Corp. President and CEO Joseph Gemma, who notes that they are not only growing but also converging.

“Mobility is a growing trend in manufacturing around the world,” Gemma says. “Many companies are using AVGs [automated guided vehicles] to move parts and material around their factories.” AVGs traditionally have been dedicated to a single kind of task, such as moving heavy material or parts to appropriate stations in, say, an aerospace facility. Now, AVG technology is being combined with articulating robotic arms, enabling not only transportation tasks but also loading/unloading, machine tending and measurement tasks.

At the same time, the use of collaborative robots in manufacturing is accelerating—and quickly. Kuka released the first commercially-available collaborative robot—a robot designed to safely work with human workers—in 2004. By 2015 “there were 2,000 collaborative robots in use,” Gemma says. “In 2017 there were 8,000 in use. That’s dramatic growth.” Gemma says the company is seeing much more use of the devices in industrial settings now, particularly in applications where part of an operation calls for human judgment and is done by a person while the more mundane aspect is being done by the robot. “Sensor technology has advanced so rapidly in the last couple of years that we’re able to use the robots in very different manufacturing environments,” he says.

At IMTS, the convergence of the trends toward greater mobility and collaboration is embodied in Kuka’s demonstration of an autonomous KMR iiwa robot that combines all the benefits of the company’s lightweight, collaborative LBR iiwa robot with a mobile platform. The LBR iiwa is equipped with seven special joint sensors in each axis that cause it to stop when touched. The mobile platform comes furnished with laser scanners that react immediately when a person or object is in its path. Booth visitors can see the device safely and accurately at work on an automobile chassis.