Laser Optimization Brings AM to the Next Level for Moldmaking 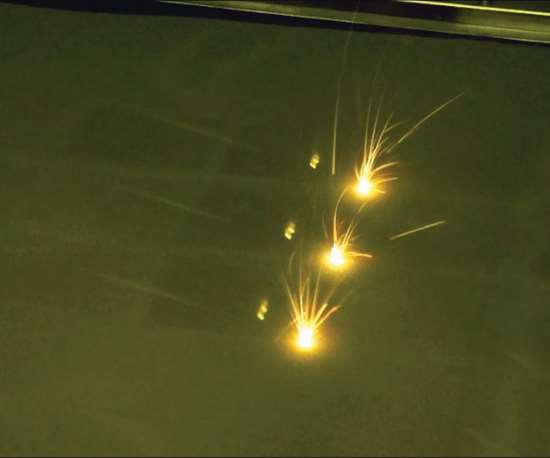 The part on the left was built on a Sodick OPM250L using parallel mode. Parallel mode automatically optimizes the laser path, enabling three locations to sinter simultaneously, even on the same workpiece.

Metal 3D printer manufacturer Sodick first launched its OPM250L at IMTS 2016, where Phoenix DeVentures of Morgan Hill, California, showcased its success with the new hybrid machine. The OPM250L combines laser sintering of metals with a high-speed machining center to produce precision-machined components with features that are not possible with machining processes or 3D printing alone. “It brings everything together by integrating the laser-sintered layers with machining,” says Phoenix DeVentures CEO Jeff Christian.

Laser Sintering Plus Machining
Using 3D printers to build prototypes for testing has always been very important to Christian. Since he first acquired a Stratasys fused deposition modeling (FDM) machine in 1997, he has kept his eye out for the opportunity to do more with 3D printing—specifically, printing injection molds and shooting parts in engineering resins, rather than simply printing prototypes. The hybrid OPM250L does more than that. Christian says it nearly eliminates the need for EDM, reduces part warpage and dramatically reduces cycle times via conformal cooling.

Typically, it would be necessary to make 15-20 electrodes for a mold, sometimes more. Plus, any required square or internal corners on the mold (external corner on the part) had to be created using EDM. With the OPM250L, the EDM steps can be avoided.

The laser sinters metal, layer upon layer, until a specified number of layers is achieved. The machine’s default is 10 sintered layers, but this can be changed. Then its milling capability cuts the finish surfaces 10 layers thick (0.020 inch at a time). “So, if you have a very tall part with very deep slots in it, you are not coming back in and EDMing these, you are machining these from the base up as it builds. You nearly eliminate EDM,” Christian says.

One of Christian’s initial concerns about 3D printing parts was warpage. He says that grown parts tend to warp, or pull upward, similar to what occurs with welding. Melting then cooling steel causes it to shrink, resulting in such warpage. Phoenix DeVentures worked with Sodick to develop techniques that nearly eliminate the warpage, he says.

He also notes the value of using conformal cooling in 3D printing. “I can run cooling close to the mold surface through a serpentine pathway, and drop cooling time and overall cycle time of molding parts. Our best case was a reduction in total cycle time by 50 percent. Typical reduction is closer to 30 percent,” he says. The increased throughput possible using molds with conformal cooling means the shop has had to buy fewer molding presses. According to Christian, his molding supervisor prefers molds with conformal cooling because they can be set up faster and easier, and part consistency is easier to achieve.

Phoenix DeVentures bought the OPM250L primarily as a moldmaking machine for the manufacture of its medical products, including implants, catheters and dental devices. “Being able to print steel molds faster on this machine has allowed us to get more output through those prototype molds.” Christian says. “Case in point: We printed a mold insert on a different laser sintering machine that then needed to be polished by hand, taking three to four days to get the required surface. As a test, we then decided to build the same mold on the OPM250L. After 14 hours overnight, we had steel mold inserts finished perfect to size.”

Parallel Mode
Since then, additive manufacturing has continued to ease the mold engineering process for the shop. It is “the great facilitator,” Christian says, and Sodick technology plays a valuable role in this continued AM development through its parallel mode, a high-performance 3D printing technology for OPM machines. This technology does not add more laser units to the machine, but instead sinters material at three different locations nearly simultaneously using only a single beam, dramatically increasing productivity.

Christian says that, although parallel mode was not yet available when he took delivery of the Sodick machine, it was installed a couple of months later and achieved exactly what the manufacturer claimed it would, reducing laser time dramatically.

Because laser sintering equipment typically must take fumes and shape deviation into consideration when generating the laser path, the laser unit on other machines is not necessarily used at full capacity during processing. “Although fumes and deviation are always taken into consideration, by sintering multiple locations, you are not influencing the fume buildup in the vicinity of the other laser targets,” says Tom Hipp, Sodick’s national OPM product manager. “At its most fundamental level, this is why systems with dual or quad lasers can be used. However, Sodick’s technology uses this same principle with regards to the capacity of a single laser.”.

In addition to efficiency considerations, Hipp says parallel mode is suited to a variety of applications and can be used not just to create replicas of the same part, but also to produce singular large parts in less time. “Parallel mode doesn’t have a strict ‘maximum’ size,” he says. The OPM250L has a 250-by-250-mm work envelope, and parallel mode will operate throughout the production of a workpiece that size.

Unlike multi-beam designs, which often use separate work envelopes, parallel mode is not limited to one beam per quadrant. This means that a workpiece covering only one part of the worktable will benefit from parallel mode just as much as if it had covered the entire table, Hipp says. “In general, multi-beam systems often align their beams to fit limited work envelopes. However, as with any single-beam design, the OPM work envelope is defined by what the single laser unit can reach. That means, because the single laser unit can reach the full work area, parallel mode can reach the full work area. This makes sense when you consider that parallel mode is simply the optimized use of the same laser,” he says.

Parallel mode also benefits from a recently upgraded standard fume collector with a higher capacity design. Hipp says it lasts about three times longer than the original design, allowing it not only to run longer between maintenance cycles, but also to easily accommodate the fumes produced by parallel mode’s increased productivity.

Together, these advancements help to optimize the quality of the metal-3D-printing process, which includes programming of the laser, allowing users to accurately print finished, high-density parts that may not be possible otherwise, Hipp says.

To watch a video that shows a machine using parallel mode technology to print a workpiece in maraging steel, visit short.moldmakingtechnology.com/parallel.