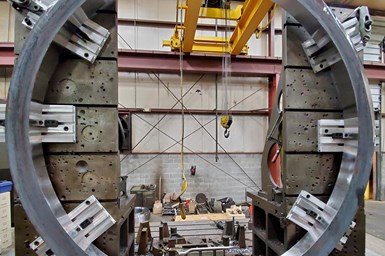 Akron Gear & Engineering of Akron, Ohio, provides parts and service to a wide range of industries. This includes large machining jobs such as the ability to supply large industrial gears. Recently, the company had a problem to solve: One of its customers needed a 1-ton, 7-foot-diameter ring as soon as possible, but the shop’s﻿ vertical turning lathe was down for a complete overhaul.

Instead, it﻿ had to use its Juaristi horizontal CNC boring mill with 3+2 axis machining capabilities. The boring mill’s X- and Y-axis travels measure 118 and 95 inches, respectively, and the W axis measures 28 inches. The challenge was holding the ring in a vertical orientation. The stress from the weight of the part and the machine forces would overtax the workholding solutions the shop had on hand at the time, so it turned to Mitee-Bite Products.

According to Mitee-Bite’s General Manager David Bishop, sending the job overseas would have resulted in a “two-month transit time for ocean freight delivery; that cost alone could exceed manufacturing expenses.” As it turns out, by working with Mitee-Bite, the shop was making chips in less than 10 days.

Designing Workholding for a One-Piece Run

The modular design was vital for avoiding distortion from clamping pressure in this application. As the large, one-piece run left little room for error, Akron Gear & Engineering and Mitee-Bite conducted an extensive brainstorming session and used CAD simulation software to optimize the workholding design. In the end, the T-slot subplates were machined flat with recesses on both the ID and OD so the boring bar would clear the edges during the finishing pass without contacting the plates. They mounted these plates centered on the ring’s diameter, placing the clamps and hard stops into a static position and equally applying contact pressure in small increments in all directions until the clamps achieved sufficient holding force. 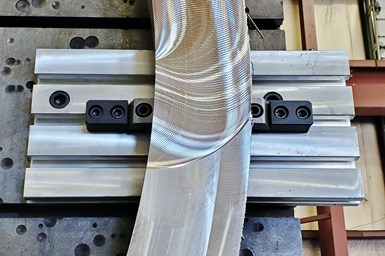 Mitee-Bite’s Pitbull clamps can exert up to 12,000 pounds of pressure.

In the first setup, they bolted or clamped the T-slot subplates onto the angle plates, and used the Pitbull clamps to hold the part. The Heavy Duty T-slot clamps with Pitbull clamps are capable of generating more than 12,000 pounds of pressure, though Mitee-Bite recommends using three T-nuts with tungsten carbide coating grips and a secondary TSN locking T-nut to secure the base at these high levels of force.

The Pitbull clamps “did exceptional work in the way they were designed,” Miller says. The only issue he encountered was that the position of the angle plates meant they could not prevent vibration between the top supports. With the ring’s crust proving harder than the material under the surface, machining the unsupported portion of the ring resulted in chatter marks. To remedy this, Miller used a 4-inch face mill to get through the surface before switching to the 6-inch face mill for a 0.060-inch depth of cut at a 90 ipm feed rate. (While this still caused vibration, it was slight enough that he could take a final pass using a 6-foot boring bar with a single point insert to finish the part.) 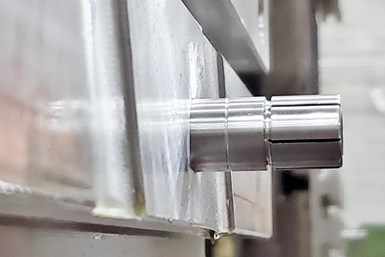 After Miller﻿ milled and finished one face and drilled and reamed the holes in the part, op. 1 was done. He removed the ring to drill and tap holes into the subplates for the 16-mm Xpansion pins, and the plate went back on with very little effort, he says.

With the pins tightened down, he then milled the face of the second side and circle milled the ID and OD to 0.125 inch from the finish size.

“The setup using the Pitbull clamps and Xpansion pins was the engineering of Mitee-Bite and their team,” Miller says. “They knew what obstacles we were going to face by going vertical, and the expertise they provided was spot on. Both the clamps and pins work as exactly as described, even with a part this large and heavy.”

While Akron Gear & Engineering plans to produce similar pieces on its VTL once it is back online, Miller notes that “if we get into a bind, I now have the capability of producing it on the Juaristi.”