This UNISIG USC-M50 was the first of three multitasking UNISIGs purchased by Concours Mold to help speed deep-hole drilling and reduce setups. Little did they know it would be a game-changer for the machining processes used. The M50 features a 25-ton capacity table for workpieces as large as 3,000mm. The employee at left helps illustrate the size of the machining center and yet Concours says its footprint is smaller than the machines it replaced.

Powerful and fast deep-hole drilling, as shown here on the UNISIG USC-M38, is what attracted Concours Mold but the flexible five-axis USC-M Series’ multitasking abilities transformed the company’s machining operations, causing it to announce to its employees that this machining technology is the future.

One machine, the multitasking Unisig USC-M, has so improved Concours’ machining processes that the company produced this video to show customers how its many features and functions helped to significantly reduce downtime by performing deep-hole drilling and complex milling operations faster and with increased precision. In addition, the five-axis Unisigs enabled Concours to eliminate three boring mills and two gundrills, reducing setups by more than 50 percent.

Concours Mold Inc. (Lakeshore, Ontario, Canada) makes it a priority to keep its machinery and equipment up to date to ensure competitiveness. From its enterprise resource planning (ERP) system and advanced scheduling system, to its radio frequency identification (RFID) tool management system, to rigorous quality-check procedures, not to mention five-axis machining centers, the company does whatever it can to continually improve its processes. In fact, the company recently invested millions of dollars in new equipment, but one machine, the UNISIG USC-M, has so improved Concours’ machining processes that, according to Ed Ergun, corporate sales manager, it has been a game changer.

Problem: The efficiencies in standard machining processes at Canada facility due to multiple setups required on each of two machines (boring mills and gundrills) necessitated more outsourcing of work to keep up with deliveries. 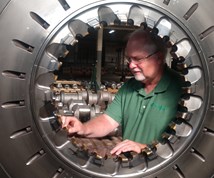 Concours specializes in building small to very large injection, compression and hydroforming molds as a primarily Tier-One supplier to the automotive industry and has additional locations in Cullman, Alabama, and Puebla, Mexico. All locations run 24/7. Molds built for interior automotive parts produce instrument panels, door assemblies, A, B, C and D pillars/assemblies and much more, while molds for exterior parts produce such items as fascias, grilles, spoilers and rockers. The balance of the company’s business encompasses building molds for heavy-truck parts and consumer products.

Still, it is the automotive OEMs that dominate Concours’ customer list and, as anyone who has experience with serving the automotive industry knows, high quality is expected, and mold deliveries are tight. “As our company announcement said when we launched our third UNISIG USC-M in February 2018, the USC-M series brings unmatched capabilities in a single, game-changing machine,” Ergun says. “This is our tomorrow.”

Boring Mill. Gundrill. Before purchasing its third UNISIG in February 2018, Concours utilized these machines every day, repeatedly, during the mold building process. “Anything that came into our facility basically hit these machines at one time or another,” Ergun says. He adds that each machine would need to be reserved in the schedule as needed to complete that portion of the build, to keep blocks and components moving and on schedule. If any issues arose that prevented movement of the workpiece, then the scheduling would be off, and machining delayed till the next available slot opened up. It was a constant struggle to update and revise the schedule to remain current.

This is our tomorrow.

“Now, instead of reserving a boring mill for three days, and then the gundrill another three days, we can take care of all the boring and high-speed gundrilling on the UNISIG,” Ergun says. “The USC-M Series machine is very much a multitasker and has reduced our lead times by roughly 30 percent.”

Concours regards the time spent setting up jobs as throw-away costs. “There are so many setups involved on just a boring mill alone, it adds up to costs that we have to absorb, plus a crane and any employees required to work on it,” Ergun says. For example, to set up a block in the boring mill, he says it would take half an hour to an hour, depending on the setup, to bore/drill five holes, then lay it down and set it up to complete another series of holes and so on.

Our setup time has decreased by more than 50 percent.

“Now we have the five-axis positioning capability of the Unisigs and FCS clamping systems along with automatic pallet changers on each machine, which is a 100 percent time-saver when it comes to switching a tool from one setup to the next,” Ergun says. Concours now sets up one pallet while the other is being worked on. When setups are required on the original block, the pallets are shuttled so machining can begin on the other job while the first block is being set up. “Because of these new improvements, the Unisigs stay in production mode with minimal down time. I can honestly say that our setup time has decreased by more than 50 percent.”

Ergun says that as Concours purchased its first, second and eventually its third UNISIG USC-M Series multitasking machining center, the company was able to eliminate other machinery and significantly reduce outsourcing work. “When we bought the first UNISIG USC-M50, we were able to eliminate two boring mills right off the bat,” he says. The USC-M50 features a 120-position toolchanger. In addition, it has a 25-ton capacity table for work pieces as large as 3,000 mm, 50 mm diameter capacity for both BTA drilling and gun drilling up to a depth of 1,830 mm, and dedicated 5,000 rpm, 24/30 kW drilling spindle power.

Then Concours purchased the first UNISIG USC-M38, which features a rated gundrill diameter of 50 mm and a BTA drilling diameter of 38 mm. With dedicated drilling spindle power of 4,500 rpm, 22 kW, drilling depth capability is 1,500 mm. The M38 also features a 120-position toolchanger and a 15-ton table-weight capacity. “That eliminated our need for another boring mill and one of the two gundrills we had, but we were still outsourcing a large amount of work plus using our remaining gundrill,” Ergun says. Since purchasing a third UNISIG, another M38, Concours has eliminated its gundrills, and outsourcing has become an “only as-necessary” option that is rarely used. “It’s about the throughput that we have gained by having these machines,” he says.

Ergun explains that Concours was outsourcing work due, in part, to tight timelines from customers and being limited as to how much work could get through the older machines with their limited capabilities. “We also feel at risk when outsourcing because of supplier limitations with regard to quality and their capabilities,” he says. “We spend much of our own resources managing vendors to ensure we get the quality we need in the timeframe required. Keeping jobs in house is definitely the best option to get the quality we need, complete the work on time and keep costs down.

Since launching the second M38 last February, we have reduced outsourcing costs by 20-30 percent.

“Our Unisigs are extremely fast, accurate and have made it possible to keep previously outsourced work in-house,” Ergun says. “Since launching the second M38 last February, we have reduced outsourcing costs by 20-30 percent.”

He adds that the speed and accuracy of the Unisigs, as well as fewer required setups, has reduced the risk of mistakes in-house, too. Concours opted to equip its Unisigs with Renishaw RMP600 wireless probes for on-machine inspection to verify work, further reducing instances of rework due to error. “The old technology was sometimes unpredictable, and surprises would come up. For example, if we drilled a water line 40 inches deep and expected it to hit an existing water line but it didn't because the drill wandered, we went into rework mode,” he says. “Where did the drill wander and how much did it wander and so on? We must gather the facts and get that information to the engineering department to fix this issue and then back on the machine for added drilling to make the circuit work.” Ergun admits that would be the best-case scenario. “If our drill hit another line, or worse, came too close to the cavity face, we could be forced into a full replacement of the block, which could cost us about $80,000-$100,000 plus the cost of all the work that was completed that now we have to scrap. Every time you move the tool from one setup to the next, you risk accuracy, bottom line.

“With the old technology, we used to accept large tolerances and could do nothing about it. Now we work within fractions of those tolerances and will accept nothing less,” he continues. “The ability to catch any potential issues on the machines enables us to deliver first-time quality in our molds. Nothing helps our business more than that.”

Ergun points out one more thing. “Yes, we're paying a lot of money for this new technology, but the accuracy and throughput will pay for that additional cost with every job we do moving forward.”