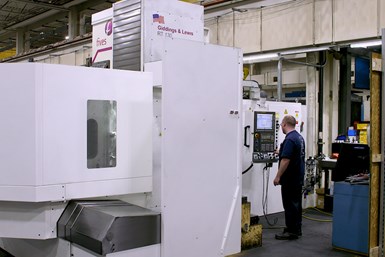 As Lincoln Park Boring expanded into new types of work, including large parts, it needed to make updates to some of its legacy equipment.

Founded in 1956 in the Detroit metro area, Lincoln Park Boring Co. has a rich history in the automotive industry. In recent years, the family owned and operated business has begun branching out and now specializes in the production of large parts and large metal fabrication for a number of industries.

The company found a niche in handling large components, some weighing as much as 160,000 pounds. These parts pose unique production challenges, including the ability to turn massive parts over and to understand how to work with them. In addition to these operational requirements, Lincoln Park Boring was also facing the problem of having a number of legacy machines — among them a jig mill from the 1960s that was still functioning but limited in its capabilities.

“The key things we’re looking for right now are accuracy, repeatability and ease of maintenance,” says Rick Yesue, president of Lincoln Park Boring. “How long the machine can hold those accuracies without having major rebuilds done, that’s key right now, and also the speeds of feeds and spindle rates.” 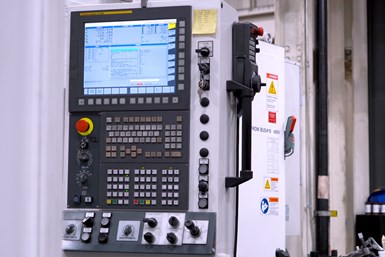 As Lincoln Park Boring expanded into new types of work, including large parts, it needed to make updates to some of its legacy equipment.

The company decided to retrofit the control in order to help its boring-mill machine handle new production demands and meet its customers’ changing needs. Yesue says it tapped machine builder Fives Giddings & Lewis to help with the project. “Lincoln Park wanted a machine that could mill all the way through to the center line,” says Micah Mullins, regional sales manager for Fives Giddings & Lewis.

Because Lincoln Park Boring is known for its high-accuracy standards, the equipment was upgraded with a high-accuracy package. During the build, Fives Giddings & Lewis had very strict procedures in place to deliver on the product.

The machine required robust controls that could deliver the performance needed for the type of work Lincoln Park Boring performs. This led Fives Giddings & Lewis, a FANUC-authorized integrator, to install a FANUC controller in the retrofit. Yesue agreed that the FANUC control would be a good fit. “(Fives Giddings & Lewis) have a real trust in FANUC, and that helps us have a trust in FANUC,” he says. “We’ve grown and worked together on a number of things, such as this control.”

Lincoln Park Boring wanted a control that had the flexibility to be used manually and could enable quick setups for low part runs. Fives Giddings & Lewis partnered with FANUC to customize the control’s human machine interface (HMI) with a subplate that has a separate joystick and includes the speeds and feeds. This allows operators to use the machine manually, so they don’t have to program the control to produce one or two parts. “That really helped us to deliver that type of solution,” Mullins says. “And FANUC totally supported us. It was a great partnership.” 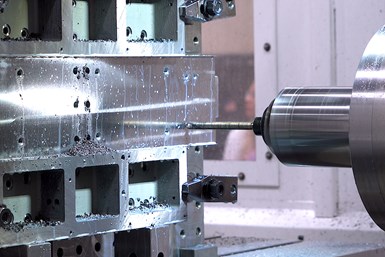 Since being retrofitted with the new FANUC control, the boring machine has more capabilities, can hold tighter tolerances and is able to accommodate more rapid travel rates.

The result of the retrofit is a machine that has more capabilities and can hold tighter tolerances than it did before. Additionally, the control is able to run the equipment faster to accommodate rapid travel rates. Yesue says he couldn’t be happier with the end product and believes it will allow the company to go after new business. “FANUC controls are a great control for a boring-mill style machine. It’s a highly capable control and plenty powerful enough for the accuracies needed for this type of work,” Mullins adds.

Additionally, with FANUC offering lifetime support, Lincoln Park Boring won’t have to worry about this control being obsolete in a few years. However, Yesue says his operators don’t have to make a lot of service calls about FANUC products.

The company has already retrofitted another machine since the boring mill was completed. “Anything we retrofit would have a FANUC control,” esue says. “Fives Giddings & Lewis and FANUC are where we’re headed in the future.”