The Up! App connects machine shops with service providers who can repair their equipment.

David Wall uses The Up! App to inform shops about his machine life cycle service capabilities.

When The Up! App was introduced early last year it was largely thought of as a technology play. Often described as an Uber for machine tool repair, the application connects shops needing service for their equipment with independent or authorized OEM service providers. As the business has matured, however, it’s also increasingly become about people. The people behind the app, the people doing the repair work, and the people who need to get their equipment up and running as quickly as possible.

But as technology goes, The Up! App is right in step with the best of today’s service applications such as ride share or home repair services like Angie’s List. It’s remarkably easy to use. For a service request, the shop enters basic information such as machine make and model, a description of the problem and desired repair date. Service providers then bid on the job through the app, and the shop picks the best match. The app gives both manufacturers and technicians more control over the repair process, so they can do more in less time.

The Up! App customer success team reaches out to service providers to ensure requests are handled expeditiously and coaches service requesters and providers on best practices within the network.

Initially the Columbus, Ohio-based app was beta tested in Ohio, Indiana and Kentucky. Now, says Sales and Customer Success Director, David Rhodes, The Up! App has service providers throughout the US and parts of Canada.The app is designed to function as a collaboration hub between:

A big part of making it work for all three is the customer success team Rhodes oversees. The team continuously monitors all service requests to ensure they receive sufficient and prompt replies. If it looks like that’s not happening, or it’s an unusual request, they reach out to qualified service providers to reply. Rhodes says that service requests will typically get several replies within a few hours. This new platform is a win-win for both service requesters and providers.

Gene Mazza is a good example of how accessing a wider network of service providers can solve problems fast. Mazza’s Mechanical Specialties (Binghamton, NY) specializes in prototype and short run machining. He had two older die sinker EDMs, one of which hadn’t been functional for a while. When the other one went down, he had a problem. Through The Up! App he found Chris Thompson of CTME CNC Machine Repair and Electrical Services in New Orleans who took the job. “He had the newer machine up and running right away,” says Mazza. The other machine was not salvageable, which was nonetheless good information to have for the shop’s planning purposes.

The Up! App is extremely easy to use and available in both desktop and mobile versions. Shown here are quotes for a service requester (left) and requests for service for a service provider (right).

The obvious advantage for independent service providers is that the app is a way to make them more visible in the service marketplace. For David Wall, the app is a tool to strategically build out his business, Wall Control Services (Fort Wayne, IN). The business had been founded primarily as a systems integrator. This year Wall has established a new unit, machine life cycle services, and he thinks the app will help grow that business. An early win with the app was a big one. Wall established a relationship with Makino and is now becoming part of its service network.

Increasingly OEMs and distributors are embracing the app as well, seeing it as an extension of their own service network. They have a keen interest in keeping their customers up and running, and it makes sense to use independent service providers for work that doesn’t require a factory-trained technician. Some are even using the app to access their own customers. Makino is one. Says VP of customer support, Mark Rentschler, “The Up! App is a good addition to our customer support strategy. It provides another convenient way for our customers to reach our service technicians.”

Back to the technology, The Up! App has just released its third generation platform, which Rhodes says further streamlines the communication process. Service providers can attach documents like qualification certificates, training history and customer ratings to their in-app profile. Text notifications have been added as well as the ability for service providers to collaborate, which could be two independent service providers with a cooperation agreement, or independents working with OEMs or distributors.

That’s good news for shops and service providers, because this business is growing fast.

For more information go to TheUpApp.com. 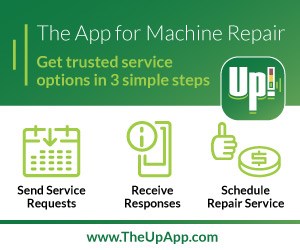