Ready or not, Industry 4.0 is moving forward, and it’s critical for manufacturers to be ready for it. Many machine tool builders and accessory builders are equipping their products with Industry 4.0 compatibility in anticipation of its implementation by customer shops. 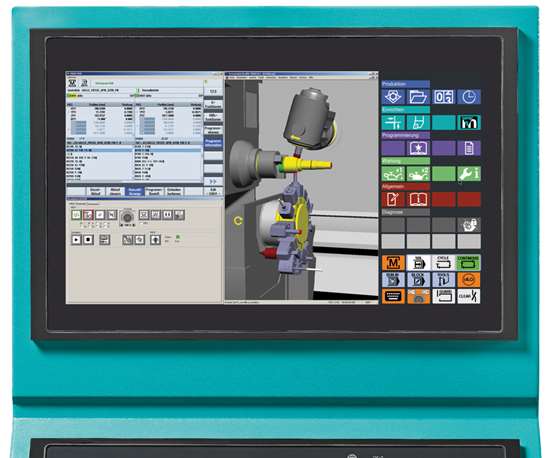 Integral to the Xpanel is its 18.5-inch touchscreen, to which numerous rotary and tip switches have been moved from the machine CNC panel. The high resolution screen is suitable for 3D simulations.

The interface displays useful information such as setup sheets or tooling lists on the machine’s CNC as it operates the machine tool. They are displayed on a second screen page, which the operator can toggle to by pressing one button.

User and machine documentation is embedded as background information in Xpanel when the machine is commissioned. Both operating and programming instructions as well as complete circuit and hydraulic diagrams are part of the startup package.

A connection with an industrial PC, installed in the control cabinet, enables access to applications such as Virtual Machine on Board and various simulation modes. These can be coupled with or run independently of the machine’s operation.

Much actionable information about the operation of a machine tool and the accessories that work with it can be contained in the machine’s CNC. This information, when connected to a wider in-house network and then made available outside the machine, can be analyzed to help make informed decisions about machine performance. This is at the heart of Industry 4.0.

Index Corp. is an example of a machine tool builder moving forward with Industry 4.0. The company now supplies all its machines—single and multi-spindle machines as well as turn-mill centers—with the newly developed Xpanel operating system. The system is designed for easy setup and control of the precision turning machines.

Designers are including more functionality in components to be machined; workpieces are becoming more and more complex. To produce them economically, machines creating these parts must be powerful and flexible. Lathes must have multiple toolholders and a variety of axes. To ensure a smooth production process, operators need plenty of information and ideally a reliable 3D simulation directly on the machine. Therefore, Index created the Xpanel operating system.

In its standard version, the Xpanel interface offers extensive user assistance through complete integration into networks. Drawings, setup sheets, user manuals, circuit and hydraulic diagrams, and so on, are available directly on the machine without additional hardware. Also, the system, with an additional industrial PC installed in the control cabinet, permits the user to run 3D simulations coupled with the machine in real time or creates complex programs using a self-contained CAM system. There are virtually no limits to data communication.

XPanel focuses on the optimal control for workpiece machining with maximum productivity. But the operating system also provides a direct connection between the machine control and the operation’s data collection group within the company. Besides job and setup information, the operator also receives drawings and quality requirements or even his/her own documents on the control panel screen. Xpanel thus creates the conditions for the use of Industry 4.0 that is increasingly being demanded across industries.

Network-Integrated Control and a High-Res Touchscreen

Before the idea of such a control system could be implemented in detail, basic conditions had to be created: Index had already made the step to a network-integrated control technology with the new C200 sl control generation, which has been on the market for more than a year and is now standard for all new Siemens-controlled Index machines. It is based on the Siemens 840D sl (solution line) control, drives, 1FT7 servomotors and the ET200S ProfiBus peripherals.

Another fundamental component is the 18.5-inch touch-sensitive wide-screen monitor that does not require a Windows PC. The user interface works with a separate controller, running Index’s software, among others.

The new control panel concept of the C200 sl is a small revolution: It included not only an already familiar keyboard, but also many non-safety-related rotary and tip switches from the machine control panel directly on the touchscreen. This creates space for the 18.5-inch monitor with WXGA resolution (1,366 × 768 pixels), 16:9 aspect ratio and LED backlight with 300 cd/m² brightness. These characteristics make it possible to use the monitor for high-resolution simulations on the machine itself. Thanks to the latest capacitive touch technology, the screen can be operated even with gloves. A touch is sufficient to activate the desired function.

Because hardware elements are eliminated, the machine control panel located under the monitor has become significantly leaner and clearer. The remaining keys are provided with LED backlight and are protected against accidental operation. If they are operational in the current machine status and the associated movements are allowed, they are selectively backlit, while invalid keys remain dark. Flashing keys must be enabled by the operator to guide he or she and prevent errors.

The touchscreen has a separate controller. For this mini-computer with an 8 GB memory card and USB port, Index developed its own software, which lays the functional foundation for the Xpanel concept. By using the integration with a corporate network, it provides the machine operator with useful information for his/her current activities.

With this CNC interface, Index primarily wants to make the machine operator and setup engineers’ jobs easier as well as increase the machines’ productivity.

After starting up the machine, the control screen appears with the information of axis positions, and so on. On the right side, where hardware keys used to be, there is now a vertical control strip that contains the keyboard, number pad, cursor keys, and some other touch buttons. One of them is the so-called “i4.0-ready” button that is used to launch “Xpanel Industry 4.0.” Its use is not required, but it is merely a support option provided by Index. If it is not pressed, the operator sees the usual control environment.

By touching the i4.0-ready button, the control strip on the right edge of the screen changes to an activity-driven display. It contains the pre-selectable areas of production, setup, programming, maintenance, general and diagnostics, which are associated with additional function keys labeled with icons. They enable operators, setup engineers or maintenance personnel to obtain additional information on the machine’s screen.

The Xpanel software that was developed in-house allows the user to open a second view on the screen. Pushing a special button on the touch monitor, the user can toggle between the “normal” control view and this “second page” at any time. For example, if the user selects the icon for the workpiece name in Industry 4.0 mode, it will be displayed on the second screen page, and the user can then navigate to it repeatedly by pressing a button. Other buttons allow him/her to retrieve and view job or quality requirements and return to the control page.

Similar assistance is also available for setting up tools for a new job. Here, interface can provide setup sheets and tooling information on the second page. Full-page display of PDF formats in combination with extensive and intuitive navigation and zoom functions on the touchscreen enable safe transfer of all information.

However, before retrieving the documents, for example, DNC of the NC program, they must be stored in the workpiece folder provided—for which mostly other departments are responsible. When the program starts, Xpanel then searches these folders for stored information and, if it finds any hits, enables the corresponding button. If nothing can be found, the button remains gray.

The entire user and machine documentation is available as background information in Xpanel when the machine is delivered. This includes both the operating and programming instructions as well as the complete set of circuit and hydraulic diagrams, which previously are shipped on a separate DVD. So, the user no longer needs to look for the proper DVD and a PC workstation. Everything is available directly on the machine. Does anybody remember operating manuals?

Xpanel also offers an editor, which allows the machine operator or programmer to add his own notes to the workpiece job. If the workpiece program is used again at a later time, the documented empirical values help to get back to an error-free production in the shortest possible time. This function is helpful also for passing information during a shift change.

3D Simulation at the Machine

All the functions mentioned so far are included in the standard version of Xpanel CNC interface. But many more possibilities open up with an optionally available industrial PC, the so-called VPC Box, installed in the control cabinet. It can be connected with the operating panel via an Ethernet interface, and it also uses the second page of the control screen.

The touch functionality and wide-screen view of Xpanel then allow the use and consistent operation of Virtual Machine (VM) simulation software, also developed in-house, which previously could be used only on a separate PC outside the machine.

“VM on Board” now takes 3D simulation directly to the machine control panel. Based on the new technical capabilities that the Siemens 840D sl provides, Index has developed additional functionality in the VM. For example, the virtual NC core can now be run coupled with the real machine. This enables collision monitoring in a completely new dimension.

There are different operating modes offered for VM on Board. Crash-Stop and Real-Time use coupled operation with the NC core of the machine tool. Crash-Stop allows the advance simulation of workpiece programs on the machine. In case of a virtually detected collision, the function triggers a timely machine stop to prevent the real collision. Using real time, the machine program can be simulated on the operating panel simultaneously, thereby enabling real-time analysis of the machining sequence in difficult-to-access work area situations. VM on Board is also useful for creating and testing new NC programs, for which direct connection with the machine is not required.

Xpanel interface offers access to useful assistance for machine programming via the VPro ProgrammingStudio that can be used with the VPC Box not only as part of VM on Board, but also directly on the machine’s control. Self-contained machining operations are generated with VPro as NC code by repeated sequential selection of individual technology steps. The functionality of the machine and control equipment is taken into account at every step. The generated NC code can be viewed and also edited manually at the machine.

The VPC Box even allows the use of the NX-CAM system with an Index postprocessor directly on the machine under the CAM on Board button. Other CAM systems and other customer-specific applications can be used as well. The industrial IPC uses open architecture for access by the user’s IT department for this purpose. The open system allows the customer to adapt Xpanel to specific user needs and to integrate its own applications and functionalities.

As manufacturing moves inexorably to digital manufacturing, the companies that can capture and analyze what is actually happening on the shop floor in real time (Industry 4.0) will have an advantage.

Machine tool builders, such as Index, are preparing their machines for this eventuality as are builders of auxiliary equipment such as bar feeders, chillers, coolant distribution and others. The data that can be captured collectively from these manufacturing centers, as well as shop-wide, will enable better decisions about when and what to do about production efficiency.