The lithography-based ceramic manufacturing (LCM) process allows the cost-effective production of ceramic parts even for a batch size of one.

Additive manufacturing allows for the production of prototypes which exhibit the final properties of the desired component, but it is also suitable for small and medium series production.

Manufacturing process: The lithography-based ceramic manufacturing (LCM) process starts with a slurry consisting of a ceramic powder and a UV-light sensitive momomer. After debinding and sintering, the end-use part is a gas-tight component with a smooth surface. Images: Steinbach AG

Due to the debinding process, in which the polymer parts are burnt out of the component, the wall thickness is currently limited to 4 mm maximum. Thicker wall thicknesses significantly increase the cracking probability of thermal treatment.

High-performance ceramics are useful to produce high-wear spare parts. For batch-size one production, the LCM process is much more cost-efficient than conventional methods including dry pressing, injection molding or grinding.

Due to their special structural and functional properties, components made of high-performance ceramics are mainly used under thermally, mechanically or chemically demanding conditions. Currently, such components are rarely produced using additive manufacturing (AM). However, AM's significance will increase in the future due to many positive factors such as time and cost savings. Added to this is the extremely positive environmental balance, says Michael Steinbach, who heads the Technical Ceramics division of Steinbach AG, a medium-sized company located in Detmold, Germany. Under the direction of Steinbach, the division underwent a dynamic expansion at the beginning of 2016 when the company purchased 3D printers and state-of-the-art furnaces, enabling them to introduce their product line "Form Ceram."

Components Drawn From the Slurry

To additively manufacture ceramic components, Steinbach uses the so-called lithography-based ceramic manufacturing (LCM) process. According to Steinbach, LCM is a revolutionary manufacturing process for ceramic materials. The starting material is a suspension consisting of ceramic powder and a UV-light-sensitive monomer. Experts refer to this suspension as a "slurry." The UV exposure causes the polymerization of the material and thus the solidification of the liquid suspension. 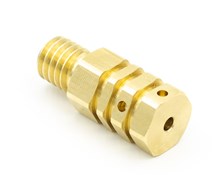 Before printing, the CAD data is sliced into individual layers (layer thickness 25 micron). The build-platform is then submerged into the slurry. UV exposure leads to polymerization turning the liquid slurry into a solid consisting of ceramic powder and a polymer. This process is repeated until the desired height and contour of the component has been reached. "The parts are then cleaned and placed into a debinding furnace for up to six days,” Steinbach says. “The thermal process of debinding and sintering removes the polymer content from the component (the polymer decomposes and outgasses), ensuring a highly pure ceramic state that contains no additive residues. Following the debinding step, the component is sintered for up to two days at a temperature of up to 1,600°C.”

Traditionally, ceramic components are manufactured and processed by using dry pressing, injection molding or grinding. The additive production of technical ceramic components offers several advantages over conventional methods, says Steinbach. "One big advantage is the elimination of tooling costs, which constitute a significant cost, especially for small to mid-sized quantities,” he explains. “Using our LCM process allows us to even produce a single part at low costs, which wouldn’t have been economically feasible to produce using conventional technologies. Additive manufacturing allows for the production of prototypes which exhibit the final properties of the desired component, but it is also suitable for small and medium series production. Here at Steinbach, we mainly deal with series production.”

Depending on the component’s intended use, aluminum oxide or zirconium oxide are currently used as ceramic materials in Steinbach's LCM process. For zirconium oxide, the maximum part dimension is 56 × 31 × 110 mm; for aluminum oxide this is slightly larger with a maximum height of 117 mm. Due to the debinding process, in which the polymer parts are burnt out of the component, the wall thickness is currently limited to 4 mm maximum. Thicker wall thicknesses significantly increase the cracking probability of thermal treatment. Walls larger than 4 mm can be realized by design adjustments such as intrusions, penetrations or depressions, Steinbach explains. Steinbach is currently testing a new slurry made from aluminum oxide which will allow for increased wall thickness.

According to Steinbach, the LCM process is more accurate than laser sintering, a process which can produce larger components than LCM technology. The accuracy of the process depends mainly on the shrinkage that occurs during the sintering process. "We are able to control the shrinkage process that occurs during production," Steinbach says. "The shrinkage that occurs amounts to ±1 percent of the length, but not more than ±0.1 mm. The surface quality is Ra 0.4 without postprocessing. The print resolution is 40 microns in the X and Y axes and 25 microns in the Z axis, which results in components that are indistinguishable from conventionally manufactured parts."

Opening Up New Fields of Application

Steinbach is convinced that additive manufacturing processes for technical ceramics will continue to advance. "For example, ceramics are useful to produce high-wear spare parts. Machines commonly feature metal or plastic parts which are subjected to high amounts of friction and fluctuations in temperature, which leads to a shorter service life. "Ceramic components can help remedy this situation; however, many people are reluctant to invest in expensive tools and put up with the downtime this involves. Creating a special tool or mold often only makes sense when it involves quantities in excess of several tens of thousands of units. Additive manufacturing is a cost-efficient alternative to produce small batches or even single units. The low unit costs could open up completely new fields of application for ceramic parts.”

As a way of helping them to serve international customers faster, more cost-efficiently and with more customer-focused service, the company has recently pooled its expertise in ceramics with Protiq GmbH. Protiq, a member of the Phoenix Contact Group, has developed a web portal for uploading and configuring 3D models that can then be used to directly initiate orders and print jobs for additive manufacturing.