3D printing is already finding its way into end-use part production for cars. The Aston Martin Callum Vanquish 25 by R-Reforged, a reimagining of the 2001 Vanquish, will included multiple 3D printed parts on board. Read on. Photo Credit: Callum

3D printing has long been touted as a solution for prototypes, one-offs and small volumes, but can it find its way into large-scale production? Specifically, production in a high-volume industry like automotive?

While it will likely still be some time before mass-market vehicles like the Honda Civic or Chevy Malibu sport 3D printed components, there are already compelling use cases for additive manufacturing (AM) in the automotive sector. Automakers are turning to the technology for its design freedoms, lightweighting capabilities, material options and more. The quantities of these parts being 3D printed remain relatively small for now, but these low-volume and bespoke components point the way toward greater use of the technology in the future.

Ducts and brackets for the Cadillac Blackwing V-Series. The 2022 manual transmission models of this Cadillac will be GM’s first vehicles to use production 3D printing at scale. The cars will feature two 3D printed nylon HVAC ducts, made via Multi Jet Fusion; an aluminum bracket made with powder bed fusion; and a stainless steel medallion on the shift knob made through binder jetting. Read more.

The Cadillac Blackwing V-series models will include these two HVAC ducts and wiring bracket, as well as a medallion on the gear shift, all made through 3D printing. Photo Credit: GM

Brake ducts and switchholders for the Aston Martin Callum Vanquish 25 by R-Reforged. This special edition vehicle (pictured at the top of this article) is a recreation of one of auto designer Ian Callum’s previously created cars. Just 25 will be made, but the vehicles will feature 3D printed brake ducts made possible by a revision to the car’s front bumper, as well as a number of hidden parts and replacements for obsolete components no longer available. Read more. 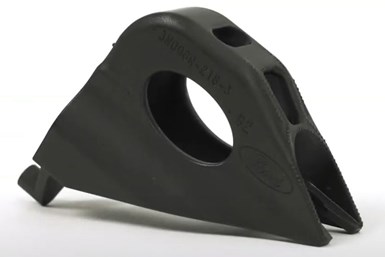 This 3D printed bracket replaces a stamped metal part that had to be made in both right- and left-hand configurations.

Parking brake brackets for the Ford Mustang Shelby GT500. Part of Ford’s Performance line of vehicles, this generation of Mustang vehicles features a plastic parking brake bracket produced through Digital Light Processing (DLP) in lieu of the previous stamped metal part. This printed component weighs less than its predecessor, but also allows for design improvements that make it ambidextrous — right and left versions of the bracket are no longer needed. Learn more.

Gear lever and pedals for a DXX buggy. The RD Limited racing team’s 2021 Dakar Rally off-road racing vehicle includes a customized gear lever and three brake pedals 3D printed from titanium. The powder bed fusion technology used also enabled the team to create a better design for the car’s exhaust ball joint, a component prone to breakage. While only a few pieces were needed for the car, these parts potentially point the way for other future use cases of 3D printing in higher volume applications. Read more.

These three pedals were topology optimized for weight savings and 3D printed in titanium. Custom parts like these may only be produced in small quantities today, but it’s possible they point the way forward for future uses of AM in automotive. Photo Credit: Poly-Shape

Brake rotors, radar antennae and more. 3D printed parts are also finding their way onto cars as aftermarket upgrades and accessories that were not part of the original vehicle construction. Just two examples: Ceramic Disc Technologies is bringing to market performance brake rotors 3D printed from a ceramic-matrix composite for thermal control and strength (watch to learn more), and Lunewave, a startup developing technology for autonomous vehicles, is using 3D printing to build the antennae needed for the company’s radar units (read more).

3D printing is making high-performance materials more accessible or easier to apply, as is the case for this brake rotor made from an aluminum-ceramic composite.

Production 3D printing applications for automotive may still be ramping up, but the technology is also being used in other, less visible ways to improve the final vehicle. Ford and GM have both shared examples of 3D printed tooling used on assembly lines. 3D printed tooling is proving its worth in forming processes like die casting and injection molding that are critical to building complete vehicles. And 3D printing has found firm footing in the world of prototype vehicles, as a means of producing everything from sand molds to create aluminum castings, to tooling for foam seat components, to plastic parts that can go straight into a test car.