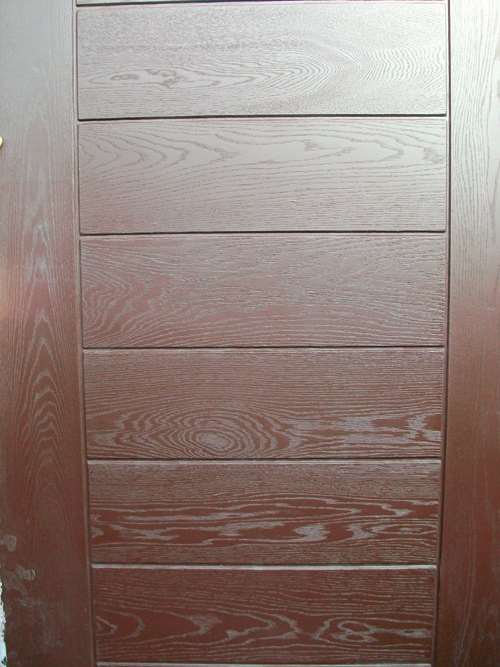 This may appear to be a wooden door, but is in fact an SMC-faced sandwich facsimile, made using the new Acell SMC molding process. Incorporating phenolic foam core, the process creates doors and other architectural panels in a one-shot, low-pressure molding process. Source: Acell

A cross-section through a pressed panel, this one without a wood frame, shows how the SMC’s resin penetrates the open cells of the foam core to form a mechanical interlock that resists delamination. Source: Acell

Hundreds of finishes are possible on Acell panels, including marble patterns, as shown here. Source: Acell

Hundreds of finishes include this brick pattern. Source: Acell

Hundreds of finishes also include this brick pattern. Source: Acell

Step 2: The bottom sheet of glass-filled sheet molding compound (SMC) is placed on the tool; in a production scenario, a surfacing veil would be placed first on the mold, to endure consistent surface quality. Source: Acell

Step 3: A wooden frame is typically included in a door panel, to allow the finished door or panel to be drilled for hardware and trimmed to shape for installation. Source: Acell

Step 5: The top SMC sheet is placed over the foam and wood frame, and will form the other exterior faceskin of the door’s SMC/foam sandwich. Source: Acell

Step 6: A finished panel is compared to the mold. Note that the frangible foam has permitted the panel’s contours to be reproduced. Source: Acell

"If you build it, they will come” may be a Hollywood movie line, but it also describes the push strategy that is sometimes employed in the composites industry — introduce a compelling innovation with the hope that markets will adapt and adopt it over time. One such innovation, the Acell sheet molding compound (SMC) process, is poised to follow that path. Patented worldwide in 2008 and introduced to the U.S. in 2010, it offers a material-and-process combination for molding tailored, high-performance sandwich panels at far less capital equipment cost than traditional compression molding.

The inventor of the innovation is Italian chemical technology development group Acell (Milan, Italy), which for 25 years has produced a unique, open-cell phenolic-based foam core intended for fire-resistant building applications. Acell wanted to find a larger outlet for its foam product and developed a way to effectively mold doors and other panel products for the building and construction markets using the foam combined with SMC. A full production line was designed and built by Acell’s machinery partner Italpresse SpA (Bagnatica, Italy and Punta Gorda, Fla.) to manufacture the composite panels to design parameters. Says Acell’s commercial director, Michael Frieh, “We believe we have a business model that is creating process and products for applications worldwide.”

He might be right. It has already attracted considerable interest from industry players. In fact, Ashland Performance Materials (Columbus, Ohio) has entered into a strategic alliance with Acell to promote the technology in North America. The Acell process also captured a 2011 Award for Composites Excellence (ACE) from the American Composites Manufacturers Assn. (ACMA, Arlington, Va.) in the Process Innovation category.

Combined benefits in a single step

The new molding process is the culmination of considerable sandwich panel R&D. Dave Ortmayer, COO of Italpresse USA, explains that existing composite door designs, for example, are made in a multistep, labor-intensive process that involves production of an interior frame, lamination of SMC decorative skins, assembly of the parts and, lastly, injection of polyurethane foam into the interior for insulation value. The Acell process, in contrast, forms an equivalent door panel in a single step and at a significantly reduced upfront cost. “One traditional SMC door skin mold can cost as much as $300,000,” says Ortmayer. “Our process can give you a finished door, with a mold costing $20,000 to $25,000, in one shot.”

The materials are key to the process. Unlike most phenolic foams, which are soft, crumbly and insubstantial (think green florist foam used for arranging flowers, for example), Acell foam is a combination of proprietary ingredients that form a much stronger structural foam in densities ranging from 80 to 800 kg/m3 (5 to 50 lb/ft3). The foam offers insulation value; flame, smoke and toxicity (FST) protection; and acoustic damping properties. It also is available in a range of cell sizes, says Frieh. The glass-filled SMC used for the door skins is a formulation produced by Acell, he adds. Because SMC has a tendency to off-gas during molding, the foam acts as a breather, says Ortmayer, allowing the gases to escape through the open cells and out of the mold.

A key concern, however, was affordability. Ortmayer says the partners wanted tooling within the financial reach of smaller manufacturers or those with a wide range of products manufactured in short production runs. In typical SMC compression molding, he explains, tools are heavy and expensive, not only because part volumes are high, but also because they must resist the abrasion caused by the movement and flow of the multiple SMC “charges” arranged in the mold when they are under the necessarily high applied pressures.

Because the more structural Acell foam is still “frangible” (deformable) under pressure, conventional compression molding pressures would completely crush it, so the molding pressure must be relatively low. For that reason the Acell process uses only a single, thin layer of SMC for each skin. It doesn’t shift and flow laterally, so tool surface abrasion is not a risk. In fact, the SMC resin flows only in the z-direction — the process was designed to provide enough mold heat to liquefy the SMC matrix, causing some of the resin to invade adjacent foam cells as they crush slightly under pressure.

“The SMC skins essentially lock, mechanically and chemically, with the foam during the mold cycle,” Frieh explains, claiming that “delamination of the skins is impossible.” (See cross-sectional photo.) The low pressure and lack of abrasion permits the use of less robust tooling. The two thin cast plates — top and bottom — with the required surface details cost a fraction of that required to produce a steel or machined-aluminum SMC mold. The result, say the partners, is an accessible process, with a wide operational envelope at a nominal capital cost.

Accessibility and affordability, however, do not preclude adaptability. Numerous trials have been run in which woven fabrics are included in the layup. They simply become embedded within the sandwich, adding flexural strength to the panel. Woven aramid fabrics, metallic honeycomb core or even pultruded inserts can be integrated with a sandwich panel and pressed during the process to add blast resistance, antiburglary protection and more, says Frieh. “We want manufacturers to understand that the process is highly flexible and adaptable,” he explains. “It can produce tailored panels, thick or thin, at low cost with no additional manufacturing, like bonding or fastening, needed.”

The process setup, designed by Italpresse specifically for Acell, consists of a 120-ton downstroking press with heated platens configured to accept the panel molds. The bottom platen is designed to shuttle automatically in and out of the press, and, says Ortmayer, a second heated bottom platen can be added on the other side of the machine so that layup can occur on one mold while the other is in the press, with layup stations on each side. The platen size for “standard” applications, such as decorative doors, is 2.6m/8.5 ft by 1.3m/4.2 ft, but platens can be customized to fit the particular project. Notably, it is also possible to modify an existing press setup to accommodate the Acell process, provided that the pressure can be controlled (with mold stops) to avoid overcompression.

Molds are customized to each panel project and are producible via conventional casting methods. To achieve a high-definition mold surface that replicates a natural material like wood or stone, a fiberglass/polyester panel is layed up directly on the selected material to produce a master model for both the top and bottom tools. The two master models are sent to a foundry, where tools are cast in aluminum-and-nickel alloy. The relatively thin tools preheat quickly and can be lifted and moved during layup by two operators. Other tooling options are possible, but the casting method produces reasonably priced tools, typically 0.75 inch to 1 inch (20 mm to 25 mm) thick.

In production, the molds are prepped for the desired panel surface finish. A wide range of in-mold coatings and finishes are possible, explains Frieh, including powder in-mold coating (PiMC), a commonly used and sprayable pigmented powder that melts and reacts with the SMC to create a UV-stable and scratch-resistant color on the panel face. Other options include colored or natural sand poured on the mold to simulate stone, or a printed veil can impart texture and pattern. Next, a surfacing veil is placed on the mold followed by a layer of glass-filled SMC, cut to net shape, which is laid flat over the prepared mold.

Then a 1-inch/26-mm thick piece of Acell foam, also cut to net shape, is laid over the SMC. A second layer of SMC is laid over the foam, along with a second veil, to facilitate release of the part and provide a pathway for the volatiles generated by the SMC. The lower mold, atop the heated platen, is then shuttled mechanically or manually into the press, where it reaches the process temperature of 130°C to 150°C (266°F to 302°F). The upper mold is lowered onto the layup, leaving a small air gap between the molds, and the sandwich is pressed for about five minutes at 5 kg/cm2 (71 psi) to form a monolithic panel, as shown in Step 6. After the press cycle, the platen shuttles out and the part is extracted.

To create a typical door panel, the process is modified to add a wooden frame (Step 3) to the sandwich, around the part edge, with the foam fitted inside the frame. Frieh explains that the wood at the edges allows a door to be trimmed to the exact size and easily accept the mounting hinges and hardware.

An architectural opportunity for SMC?

Although most conventional composite doors are now made in Asia, Ortmayer says the Acell process “allows ‘local’ onshore production because of the lower cost. It’s a way to generate manufacturing jobs at a reasonable capital outlay.” So far, seven licensees in Europe are using the Acell process to make doors and other panel products, and since the ACMA award in 2011, interest in the U.S. has grown rapidly, reports Frieh, who hopes for greater adoption in exterior building components, such as cladding panels (see photos), where the thermal insulation, UV resistance and impact resistance of the process shines.

An added benefit is that an Acell panel is fully recyclable, and up to 20 percent of the recyclate can be incorporated back into foam production. “We’ve created a lean and ‘green’ SMC molding process,” says Frieh.
The strategic alliance with Ashland is expected to make the technology more widely known, given Ashland’s technical support capabilities and wide reach in North America, says Mike Wallenhorst, Ashland’s director of product management. “It’s an impressive technology and one that deserves a wider audience.”