For this contract shop, it's what happens before heat treat that ensures hard turning process success. They've learned getting it right early eliminates problems later.

For many shops, the hardest thing about hard turning is getting over the idea that it's especially hard to do. While hard turning does take some attention to process detail, it's an alternative for shops wanting to streamline throughput.

Generally speaking, hard turning is an alternative to grinding. As such, it's a finishing process with emphasis on dimensional accuracy and surface finish quality. Like some grinding operations, hard turning is used to finish a workpiece that has been heat treated. 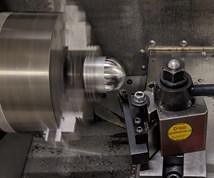 Hard turning allows a shop to turn, heat treat and then hard turn to final size and surface finish specifications. Most contemporary CNC lathes are capable of hard turning so shops conceivably can soft and hard turn on the same machine.

Still, there are many jobs that make sense to grind. Some geometric configurations and very low surface finish requirements remain in the purview of grinding. Increasingly though, applications that were automatically given to a grinding machine are being rerouted to the turning center.

Motivation for hard turning instead of grinding comes from reduced setup, better throughput, reduced machining rates and cycle time reductions, especially on complex ID and OD contours. It generally costs less to run a lathe than a grinder. To find out how processing decisions about hard turning are made, we visited a manufacturer that does hard turning on a contract basis.

In the thumb of Michigan (about two hours north of Detroit) is the town of Bad Axe. It's home to Briney Tooling Systems, manufacturer of toolholders and specialty tools. Making round parts is what this shop does. CKS Tool & Engineering--a division of Briney--operates as a job shop with a specialty in contract hard turning.

"We got into hard turning about five years ago," says George Taylor, sales and marketing manager. "Our first job was a short run of axle shafts for an automotive supplier. The part was 24 inches long and we had to hold to 0.0005 inch on front and back bearing races."

At 58 to 60 Rc, the company literally cut its hard turning teeth on that job. "We were plagued with chatter problems caused by a combination of poor setup and a lack of sufficient machine rigidity," says Mr. Taylor. "But we persevered and got the contract out. Doing this job taught us much about hard turning."

For Briney, two important lessons came from that first hard turning exercise. One was that they could do it. The second was that to do it right, a more rigid turning center was needed.

Briney's hard turning department was established with two CNC turning centers dedicated to manufacturing contract jobs. A programmer and operators were assigned. "We bought a new lathe and dedicated it exclusively to hard turning," says Mr. Taylor. "The second lathe is used for soft turning the workpiece."

Hard turning is the final step in what is basically a three-step manufacturing process. Briney generally starts a job with bar stock or a forging. It is soft turned first, followed by heat treat, which they do on-site, and finally the heat treated workpiece is hard turned.

"A critical key to successful hard turning," says Michael Thrushman, hard turning programmer, "is how well you turn the part in its green stage. The final hard turning operation is not where you want to fix errors."

A major goal for almost any manufacturer is to eliminate surprises as a workpiece progresses through the shop accumulating value. An error on an early process step can negatively impact subsequent operations on a workpiece.

The key for good hard turning results is leaving a consistent amount of stock on a workpiece after it is soft turned. "Generally, we leave about double the normal stock allowance we'd use for grinding on a soft turned workpiece," says Mr. Thrushman.

Briney focuses its hard turning on forging dies. These tools are generally hardened in the 46 to 50 Rc range. The material is tool steel, usually H-13 tool steel. "It's a tough material, which is hard to grind," says Mr. Thrushman.

There is a significant amount of ID work to be done on these tools and that's where hard turning has proven to work very well for Briney. "Inside these dies are numerous stepped diameters with blended radii from step to step. ID grinding these would be very difficult because wheel profiles would need to change so frequently. Cycle time would go off the chart," says Mr. Taylor. "With single-point hard turning we make one or two passes and it's done."

Applications for hard turning tend to be workpieces with complex geometries. A CNC turning center's programmability will usually out-perform a grinding machine even though the lathe usually makes multiple passes. A CNC turning center can create a contour by programming. A cycle time differential between it and grinding comes from the need to cut a profile into the grinding wheel to conform to a complex part geometry. This is particularly impactful for shorter production runs.

"Where grinding excels in die manufacturing," says Mr. Taylor, "is on interrupted surfaces, workpieces with relatively simple, straight profiles or single radius blends. For stepped workpieces with multiple radii, single-point turning is usually faster for us."

For hard turning, Mr. Thrushman looks for workpieces without interrupted cuts. "These play havoc on hard turning tools. We use ceramic inserts for most of our hard turning jobs. They can't take much pounding," he says.

One forging die is a particularly impressive example of what can be hard turned. They call the job the "funnel" because this forging tapers, in four blended radius steps, from a major ID of 3 inches to a minor ID of 0.870 inch.

Hardness for this job is 48 to 50 Rc. The bore is 7 inches deep. It's hard turned to a 22 to 25-rms finish in two passes. The first hard turning pass takes a depth of cut at 0.015 inch. The final, finish pass on this bore is 0.005 inch. That's about the minimum for single-point turning with a ceramic insert because below that depth, proper chip formation becomes a consideration. The insert will push the metal rather than cut it.

"We take two passes on this bore because of its depth," says Chad Carriveau, programmer and operator. "With a rigid setup on a shallower bore, 0.020-inch stock removal in one pass is easily done."

"Boring a big hole and going to a small hole with the same tool requires the tool be exactly on center," says Mr. Thrushman. "To make this 7-inch-deep bore in two passes, we run a special stepped boring bar with a ceramic insert at a zero-degree rake angle--no chatter." He adds that the bar is solid carbide, 3/4 inch in diameter, held in a tapered toolholder that is 2 inches in diameter.

The smaller boring bar is kept as short as possible. It's just long enough to complete the small diameter bore on the funnel part.

Successful hard turning is a result of the processing steps that precede it. Setup on the soft turn operation should mirror that of hard turning. Getting perfect concentricity and roundness on the green part will ensure the hard turn is good.

"When shops have problems hard turning, it's generally because the part total indicator reading on the soft turn operation is imperfect," says Mr. Thrushman. "Leaving even a small amount of eccentricity or excess stock on a workpiece will scrap out the hard turned part."

Confirming a good part means in-process checking. Briney does 100 percent inspection of parts to be hard turned. Any tolerance deviations or other problems are caught at this point, before more value, such as heat treat or hard turning, is added to a workpiece.

On the funnel part, which is gripped on the tapered OD, chuck pressure is monitored to ensure the bore is not distorted by excessive grip forces. Eliminating taper, especially on a deep ID bore like the funnel, is another check that's done on each soft turned part.

Hard turning is not a corrective operation. Its purpose is simply to bring the workpiece to final size and finish. Asking the process to do more than that is going to create problems. "The real secret to hard turning," says Mr. Carriveau, "is soft turning."

How To Heat Treat

Successful hard turning depends greatly on the soft turning operation that precedes it. Sometimes overlooked in the metalcutting process is the impact of heat treat on a workpiece.

There are many ways to harden metal. Briney uses a vacuum furnace process to take workpieces from a green state to hardened. They have an in-house department for this operation.

"We use the vacuum process over salt bath or others because it gives us virtually no distortion of the soft turned workpiece," says Mr. Taylor. "In some applications, we can leave zero stock allowance and take the job from heat treat directly to a polish process."

Programming can contribute to hard turning success. Because rigidity is critical to a stable hard turning process, how the workpiece is programmed can influence surface finish and final dimensions.

"What you want to do as a hard turning programmer," says Mr. Thrushman, "is try to control axis reversals, which are the major source of backlash in a turning center." His technique is to develop the program so the cutter is fed in a single direction. This creates a dynamic load on the turning center and produces better accuracy.

Loading the machine tool by programming it so that axis reversals are reduced or eliminated keeps relative tolerances between each component connection stable, hence more rigid.

Briney has dedicated one turning center to hard turning. That's all the machine does. "We expect this machine to last longer than a lathe that's doing soft turning work because the forces generated by shallow hard turning cuts are much less," says Mr. Thrushman. "It's definitely much harder on a machine to drill a 3-inch hole in H-13 steel than to take a 0.015-inch-depth cut on 50 Rc bore. Plus, we virtually eliminate interrupted cuts from this machine, which saves wear and tear."

Planning for a hard turning job starts with a production meeting. In this meeting Mr. Thrushman looks at how the new job is to be processed through the shop. Key items that he looks for on these parts are interrupted cuts and tolerances.

These criteria basically determine the process steps needed to produce the part. Tolerance determines if grinding is needed in lieu of hard turning. "We see a red flag on tolerances around ±0.0002 inch for the lathe," says Mr. Thrushman.

Operation sequence is also a determining factor in how a workpiece is machined. Depending on the job, hard milling may be required subsequent to the turning so the workpiece runs smoothly on the lathe. "If the face of the workpiece calls for holes, we'll put these in after hard turning so the face can be turned without interruption if possible," says Mr. Thrushman.

As a manufacturer of cutting tool holders, Briney's shop is capable of grinding OD and ID. On many of these jobs, and some contract work, it is the operation of choice.

Hard turning is an additional capability that allows the shop to enhance its contract business. Faster throughput for hard turned jobs is a major attraction for customers.

Turning rather than grinding, especially on smaller lot sizes, lets Briney's contract business bid on jobs they might otherwise pass by, because of reduced setup and machining costs. Simply put, hard turning is an additional finishing process that gives this shop a processing choice in addition to grinding.