Telling the Mainstream about Manufacturing

How do we reach the next generation of manufacturing employees? One machine tool company succeeds with local efforts. Meanwhile, “C.H.A.M.P.I.O.N.–Now!” seeks to go national.
#workforcedevelopment

An effort to reach the youth also has to reach the adults. About 70 parents, teachers and others attended an Iverson & Company open house. Here, Randy Pearson of Siemens (formerly of Iverson) talks about the work of machining near a Fryer CNC lathe.

An effort to reach the youth also has to reach the adults. About 70 parents, teachers and others attended an Iverson & Company open house. Here, Randy Pearson of Siemens (formerly of Iverson) talks about the work of machining near a Fryer CNC lathe.

Terry Iverson talks to high school students about the future of manufacturing and its various career opportunities.

Terry Iverson talks to high school students about the future of manufacturing and its various career opportunities.

It seems ironic to say the least. Today, in the midst of the highest U.S. jobless rate in decades, there are still thousands of manufacturing companies that can’t find qualified people. According to a report from Deloitte, Oracle, and the Manufacturing Institute, one-third of U.S. manufacturers currently are suffering from a shortage of engineers or skilled technical personnel. 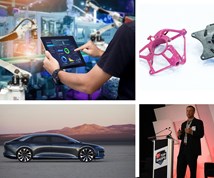 As a result, there will be too little talent ready to replace the employees soon to retire. The Illinois Manufacturers’ Association says this one state alone will soon need 30,000 new manufacturing employees per year to replace the departing Baby Boomers.

Perhaps a poster child for this problem is Boeing. Even though the company has cut jobs recently, these near-term cuts are small compared to the size of the long-term employment need the company faces. By 2015, about 60,000 Boeing employees—40 percent of total staffing—will be eligible to retire. Rick Stephens, Boeing senior V.P. of human resources, was quoted in a recent “Financial Times” article. He said, “We just don’t see the [recruitment] pipeline meeting our needs.”

Regular visitors to this website already know some of the reasons why that pipeline is getting dry. A big part of the problem is perception. Manufacturing is seen as “yesterday’s” career—even though applying advanced technology is the challenge of manufacturing today. More, manufacturing is seen as the refuge of those who aren’t smart enough for other fields—even though the very struggle companies face is to find people with the logistical and mathematical smarts that modern manufacturing requires. In fact, users of this website not only know of these perceptions, they know how to refute them. They just don’t know how to be heard. How does the metalworking industry persuade the potential engineering and manufacturing talent of the future to see the merits of this line of work?

Terry Iverson, president of Des Plaines, Illinois machine tool distributor Iverson & Company, is familiar with some of the attempts. He says he has seen businesses and trade groups make well-intentioned efforts to address the perceptions. Leaders of these organizations reach out to young people by speaking to high school assemblies and opening facilities to student tours. The efforts are great, he says—he does these things himself. However, such efforts are not enough. To mount an effective challenge against the misperceptions that surround manufacturing, at least two further elements are needed.

One, he says, is to reach the grownups. Parents and educators have to be persuaded—or else the kids who have been informed one day about manufacturing will be discouraged the next day by the misperceptions of their elders.

The other needed element is to go big. He says resources should be pooled for a media push that has the power to make an impact in the wider culture, well beyond just the manufacturing community.

He admits that what form this push would take is not yet clear. Perhaps national advertising or a documentary film. Probably a combination of these elements. He has taken what he hopes will be the first step—launching an organization to marshal the effort. The acronym in the name of his group, “C.H.A.M.P.I.O.N.–Now!” stands for the group’s goal: “Change How American Manufacturing’s Perceived In Our Nation.” Mr. Iverson is looking for members at championnow.org.

There are no membership dues as yet. No requests for money. Rather, Mr. Iverson’s hope at this early stage is simply that people who are seriously interested in this problem will identify themselves to him—people who wish to be informed about plans to positively affect public opinion of manufacturing, so that they can judge later whether they might be willing to contribute to the effort as plans advance.

A local news report that can be seen at championnow.org covered one of the most successful of these efforts. A recent open house at the distributor’s facility was aimed not at the next generation directly, but at their parents, teachers and guidance counselors, as well as at local workforce board personnel.

About 70 adults showed up, Mr. Iverson says. They learned about CNC machine tools and modern manufacturing work, and they asked engaged, specific questions in response to what they saw. The level of interest and discussion was a welcome surprise. Based on how well the evening went, he says he feels confident that at least some of the adults in attendance changed the way they thought about manufacturing and their children’s future.