Advancements in 5-axis machines, controls and software have made this technology so productive and easy to use that it can now benefit a much broader range of shops. 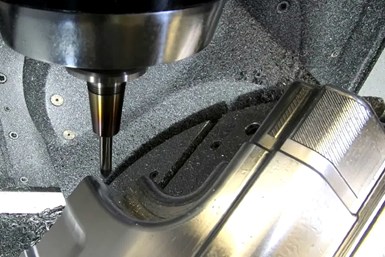 While some may still think of five-axis machining largely in the context of geometrically complex aerospace, medical and energy parts, there is a strong argument for using this technology in a much wider range of applications. Even if you’re not machining contoured surfaces, being able to get at more part features in a single setup can pay big dividends in better machine utilization and improved quality. No doubt, a five-axis machine is more expensive than a typical VMC, but the value of these benefits is substantial, and they will enable your shop to more cost-efficiently produce a wider range of work.

With three-axis machining, jobs might require two, three or more setups to get at all the features of a part. With the five-axis done-in-one approach, those additional setups may be eliminated in addition to the potential for error each time you reposition a part. The justification for a five-axis machine on these grounds is simple, with dramatic reductions in total setup time, machining time and reduced fixturing.

The Levels of Five Axis Machining

The simplest and least expensive way to get at five sides of a part is with a 3+2 machine configuration. For small to medium size machines, that typically means a three-axis machining center with a tilting rotary table to position the part. This can be accomplished with an auxiliary two-axis table on a standard three-axis machining center, which is a good first step for many shops. But a machine with an integrated tilt table typically offers better machining performance and is easier to set up and program. With a 3+2 machining center, as with a 2-axis rotary table, the fourth and fifth axes are typically locked down while the part is machined. Still, almost any plane of the workpiece can be presented to the spindle, and surprisingly complicated parts can be cut efficiently. Even for surprisingly simple parts, this ability can have a huge impact on eliminating secondary setups which reduces the time and cost to finish a part and helps get better utilization of all your production equipment.

Then there are the more complicated parts. The ability to articulate the tool at any angle relative to the workpiece will save hours in comparison to orienting parts with fixturing, sine plates or other workholding rigs and save on the cost that tooling as well. 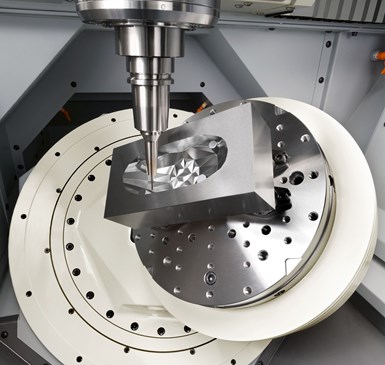 But many shops soon find that moving up to a fully integrated 5-axis machine is more productive. For one thing, it can do simultaneous contouring in all five axes, which is necessary for some part features. A full 5-axis machine also is typically faster with the ability to reduce non-cutting time through quicker workpiece indexing and higher machining rates using all axes. It’s often more accurate as well.

A primary advantage of full five-axis control is that you can now dynamically tilt the tool into the cut keep the tool vector constant as it feeds across sloped or free flowing surfaces. This is why five-axis machining is so widely used for aerospace components, orthopedics and other parts with curving features, and increasingly in die and mold machining.

Being able to dynamically articulate the tool to the workpiece also enables much more efficient use of cutting tools. For one thing, you can often use shorter tools because interference issues can be mitigated by tipping the toolholder or spindle away from workpiece or fixturing obstructions.

Also, by tilting the tool relative to the surface you can utilize the effective flute length of the tool more efficiently. That is, you can do more cutting with the side of the tool rather than just at its end. This effectively increases the cutting surface footage of the tool and can boost metal removal rates by as much as 40-50%.

Moreover, new tool designs are becoming more widely available that are specifically designed for five-axis machining. For example, circle-segment milling tools come in a variety of profiles that more closely match the contours or sloping surfaces of a workpiece. Shaped to present larger cutting areas with the side of the tool, finishing cycle times can be dramatically reduced while still generating better surface finishes and blends from one surface to another.

Making 5-Axis Machines Easier to Use

Another argument for machines that are built for full 5-axis machining is that they often have CNC functionally developed specifically for the process that can aid setup, simplify programming, enhance quality and improve safety. CAM systems have also developed to the point that programming is much easier and faster than in the past and offer features that increase the efficiency of the machining routine. These advancements include:

Simulation software such as CGTech’s Vericut can dynamically model the entire machining environment to check for interference problems.

Collision Avoidance – Because of the dynamic nature of moving both the spindle and the workpiece in a five-axis environment, unintended tool, workpiece and fixture collisions are a real danger. But by using simulation software such as CGTech’s Vericut you can model the complete machining environment—machine, material, fixturing and tooling. Control resident features such as Makino’s Collision Safe Guard (CSG) takes that model a step further and replicates the full simulation in the machine control and shuts down the machine before a crash occurs.

Tool Center Point Control — This function on Okuma CNCs controls the movement of each axis by automatically adding the tool length offset amount to the toolpath program. It also controls the feed rate of each axis so that the tool center point moves along the part at the specified feed rate. With this function tool rotational centers don’t have to be considered when programming the part.

Toolpath Smoothing – “Lookahead” technology has been around a while where the CNC scans ahead in an active part program and dynamically adjusts the feed rate for tight corners and curves to maintain a more accurate toolpath. Today’s best CNC’s take that capability to a whole new level allowing very accurate five-axis machining at much higher feed rates while generating very smooth cuts and blends. This capability can both dramatically reduce cycle times and improve quality. 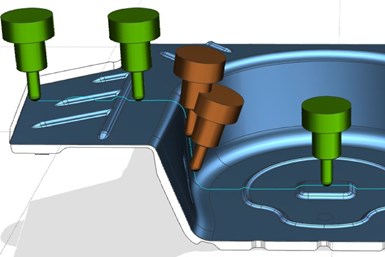 Some CAM systems allow you program in a more familiar 3-axis mode and then automatically generate 5-axis moves, in this case tilting away from the sloping surface to avoid a toolholder collision. Photo Credit: Siemens Digital Industries Software

CAM for Five-Axis Machining – CNC programming has historically caused bottlenecks in five-axis machining because of the complexities of the surface geometry and the many tool vectors. However, as CAM vendors continue to add features, programming is becoming more adept at creating efficient tool paths in less time. For example, some systems layer five-axis features on top of a more familiar three-axis functionality. You begin by generating a three-axis program as normal, and then add in the five-axis moves where the tool is tilted away from adjacent surfaces and avoiding collisions. And new systems have a variety of features aimed at specific applications such as using circle-segment milling tools; high-feed and high efficiency machining; cutting turbine blades, impellers and blisks; and more.

For more information on this productive technology, please go to the Five-Axis Machining Knowledge Center in the IMTS Spark website.