To automate the fixturing of round machining center components, Haas uses a custom, robot-tended setup incorporating MoveLock vises from Kurt manufacturing. Thanks to these vises’ rigidity, the machine tool builder has doubled the output of its robot cells compared to previous setups. 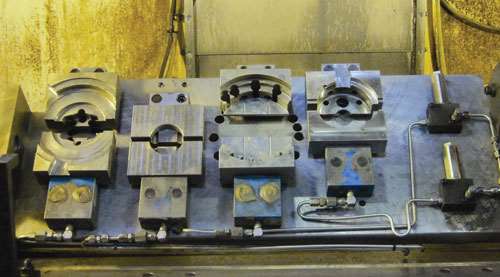 Here is a finish-machined part mounted in one of the clamping stations.

The machine tool builder also uses single-station setups, such as the one shown here.

The two MoveLock modules shown here are equipped with standard jaws, which can be custom-machined for different part needs.

With machines installed in shops throughout the country, Haas Automation (Oxnard, California) has come a long way since its founding in 1983. One factor the company attributes for its success is the use of well-planned workholding setups in its manufacturing operations. A case in point is the use of hydraulically activated, robot-tended clamping systems incorporating MoveLock vises from Kurt Manufacturing (Minneapolis, Minnesota). During their five years in operation, these cell setups have provided two to three times greater output than previous fixturing methods.
The MoveLock vise setups were implemented to automate the fixturing of different-sized round components for the company’s machining centers. Today, the plant employs several of them, which vary between one and four MoveLock stations mounted on trunion tables.  An HP165 robot from Motoman (West Carrollton, Ohio) provides automatic loading and loading. The system’s primary advantage is that no fixture setup labor is required once the pre-machined jaw plates are installed in the MoveLocks, says Phillip Linscheid, machine shop manager at Haas. “Part runs vary from just a few components to several hundred, and these setups give us the flexibility and efficiency needed for varying part quantities,” he explains.
As an example of how the fixturing systems are employed at the plant, Mr. Linscheid cites a four-vise setup mounted on a VF4 machining center’s HRT310 rotating worktable. The custom-machined jaws hold 4140 and 12L14 steel parts, which require turned diameters ranging from 2.75 to approximately 8 inches and thicknesses ranging from 0.5 to 3.75 inches. One such part calls for a 5/8-inch, Z-carbide insert run at 1,222 rpm and 50 ipm. Then, a ½-inch Z-carbide insert is employed for counter-boring operations at 1,250 rpm and 15 ipm.
At those feeds and speeds, keeping the part immobile is imperative. Providing that rigidity is the job of the MoveLock vises, which are more than just piston-driven clamping devices, the company says. These models produce as much as 2,500 pounds of clamping pressure using 3,200 pounds of hydraulic pressure. With a 5/16-inch stroke, the vises can be positioned on a base plate so that the jaw opening is limited only by the work envelope, while still maintaining adequate pressure to accommodate a wide range of part sizes.
A key feature of the MoveLock vise is its Anglock design, which prevents jaw lift during clamping. As hydraulic pressure is applied to the clamping piston, it is driven forward to locate on an internal ball segment. While lateral pressure clamps the part, downward pressure is applied to the movable jaw to minimize part lift. For every pound of clamping force on the jaw, a half-pound of force is exerted downward on the movable jaw. Haas says this clamping rigidity enables it to hold tolerances as tight as ±0.005 inch on bolt circles.
Haas produces batches of 150 to 250 round parts every week. Without the MoveLock vises, the company would not be able to achieve that level of output with its robot cells, Mr. Linscheid says.