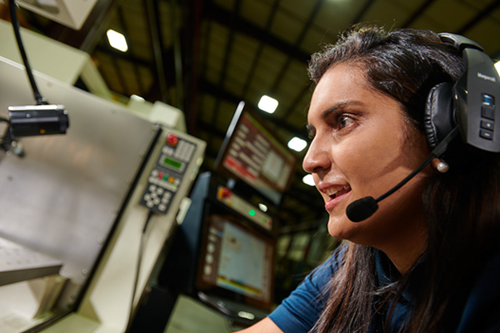 Voice interface technology has come of age and is now found on a wide variety of products such as phones, tablets, PCs, TV remotes and many other devices.  Why not on machine tools as well?

Makino has an answer for that with the Athena voice human machine interface (HMI) now available on its U Series Wire EDMs.  Makino is also in process of integrating Athena with other machine models, including vertical machining centers, which will be available in the coming months.

Athena is a hands-free way to execute several control and information display functions—one operator to one machine—with commands like, “run part-program 208 . . . thread wire . . . fill tank,” and so on. It can provide instant access to machine control functions that otherwise requires wading through the machine control interface to find things such as machine settings or maintenance history. It can also serve up critical job documentation such as setup sheets, G Code list, M code list and other documentation required to program and run the machine.

This demonstration shows how the Athena interface works on a Makino U Series EDM.

To run an Athena enabled EDM operators are equipped with noise canceling Bluetooth headsets.  This headset does not require the operator to be “wired” to the machine and has enough range for operation of Athena anywhere around the machine allowing hands free operation.   The headset runs for up to 12 hours on a single charge.  The U Series machines provide the cable and a USB port for headset charging.

The functionality provided by Athena not only assists less experienced operators still learning their way around the machine but can bring greater efficiency to even the most skilled machinists by freeing up their time to focus on more complex tasks.

The next step will be having the same interface work for other Makino machines. Ultimately the voice-activated HMI, Athena provides an interface to your Makino machines which will make moving from machine to machine easier for operators.

The Makino Athena interface is activated using the wake word “OK Athena.”  After that the command can be said as shown here.

Makino believes a voice-recognition HMI can deliver significant benefits. Makino CEO Don Lane says it fits his company’s culture of customer enablement. “We believe it can help every customer operate even better,” he says. 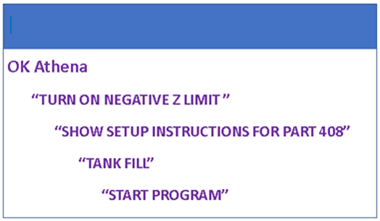 Makino is the first adopter of the Athena technology offered by third party company iTSpeeX. Will you only find Athena on Makino machine tools? No, and that’s the way they want it. The goal is that Athena will become the industry standard voice-activated HMI for a wide range of production equipment, and Makino recognizes that the more builders that adopt it, the better it will be for everyone to achieve higher levels of interoperability and data integration across the shop floor. Makino does intend, however, to integrate the technology further and faster with its machines than anyone else.

At its most basic level, Athena is simply a human-machine interface that uses voice commands rather than an array of buttons to initiate machine functions. The system consists of the headset with and software running on a shop-hardened Industrial PC. The operator uses the headset’s microphone to give commands, ask questions and Athena responds both by voice and by the Athena display. 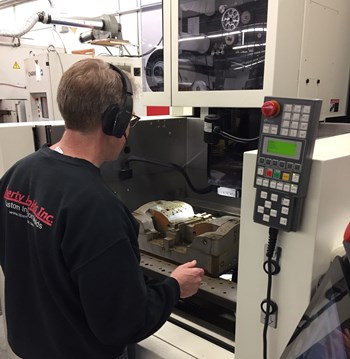 Liberty Molds’ Dave Williamson says Athena is like “ having another pair of hands” during setup.

Liberty Molds (Portage, MI) has been a beta site for an Athena equipped U Series wire EDM for the past several months. We spoke to EDM department manager Dave Williamson about his experience with the technology so far. With 40 years of experience as a toolmaker, Williamson knows his way around machine tools yet he still says that the voice interface has been beneficial in speeding setup. “It’s like having another pair of hands because you can access CNC functions without having to page through lots of screens” he says. “You also have access to a lot of information, such as if you have enough wire for the job. And it’s easier to edit programs.”

Williamson says it’s also easier to access functions you don’t often use. Plus the interface provides guidance features that will make it easier for new operators to get up to speed quicker on running machines. Ultimately it will enable one operator to run 2 or 3 machines at a time he believes.

Makino’s application of Athena is Industry 4.0 in action. It takes concepts of digital connectivity and combines it with real, practical opportunities for efficiency. Admittedly, this may be difficult for some people to see right now, but there are plenty of examples all around us we now take for granted. product marketing manager, Dave Ward, compares it to a camera phone: “Ten years ago who would have thought we needed cameras integrated into our phones? Today, the best camera to have is the camera that you have with you.”

The same can be said for voice-control technology with smartphones. What originally seemed like a gimmicky commodity is now a simple means of finding answers, buying products and connecting devices.

In the same way, the possibilities of Athena will continue to advance as data and information continue to become more readily available and easier to integrate across the shop floor. Just like with smartphones, greater value for Athena will be found as new uses are developed for it, perhaps through users realizing possibilities its inventors have not seen. For example, what might come when enterprise resource planning (ERP) data become readily and intuitively available through Athena alongside all the machine and job information?

Maybe that seems like a far way off. But considering that voice-control technology is already transforming the way we learn and connect devices, now is the time to see it in action on the shop floor.

Go here for more information on Athena and other digital capabilities from Makino.