CNC Apps You Possibly Didn’t Know You Could Benefit From 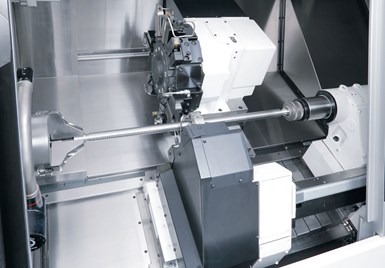 The Machining Navi app available in the OSP control reduces chatter for turning and milling operations by measuring vibrations during a cut and suggesting spindle speed adjustments.

Think of any software you use, either personally or professionally. I’d bet you’d admit there are capabilities within that software that you either don’t use or don’t know are available.

The same goes for CNC functionality that machine operators and programmers can use to their advantage. For example, Okuma’s Windows-based, open-architecture OSP control for the company’s various machining center models offers a number of apps to simplify and/or optimize part programming. Okuma cites the following five apps (some of these are part of the company’s Intelligent Technologies suite of functions) that it believes users of its machines might sometimes overlook, but otherwise could be helpful:

The top image shows the results of a threading operation without using the Machining Navi app. The bottom shows the same operation using the app.

• Machining Navi is said to reduce chatter by measuring the vibrations that occur while a tool is cutting and suggesting spindle speed adjustments based on the feedback to realize optimal cutting conditions and parameters. The app provides this information in a graph that shows operators the original programmed spindle speed as well as the recommended speed that will result in a stable cutting condition to reduce vibration.

• ServoNavi is said to improve cycle times and accuracy when machining parts of varying weights on milling machines and turning centers. It measures the inertia created by both part and fixture weight, and automatically sets servo parameters (including acceleration) to the optimum values. For example, if a machine has been running a heavy part for which the servos have been tuned, ServoNavi can adjust as machining reduces part weight. The company says this can enable faster movement to reduce cycle time while maintaining machining accuracy.

For turning centers, it estimates chuck and part inertia from acceleration torque and automatically changes servo-parameter settings to the optimum values. ServoNavi also offers features for compensating for motion reversal and component vibration.

• Collision Avoidance System (CAS) keeps machine components from colliding based on a specified clearance value. CAS integrates a complete 3D model of the machine, workpiece and tooling within the OSP control. Running a real-time virtual application of an operation seconds ahead of actual cutting helps detect potential collisions, sending an alert to the operator and stopping machine motion before the collision occurs.

The Collision Avoidance System app runs a real-time virtual application of an operation seconds ahead of actual cutting to helps detect potential collisions.

• Cycle Time Reduction speeds an existing, running program by identifying and eliminating non-value adding portions of the program that increase overall cycle time. For instance, if a spindle was programmed to run at a given speed, the axes typically will not begin moving until it is confirmed that the spindle has reached that speed. Cycle Time Reduction codes can start axes movements before the programmed spindle speed is reached, which can eliminate a few seconds of cycle time. This app is especially valuable for parts that require many tools and operations as that lost time can add up. 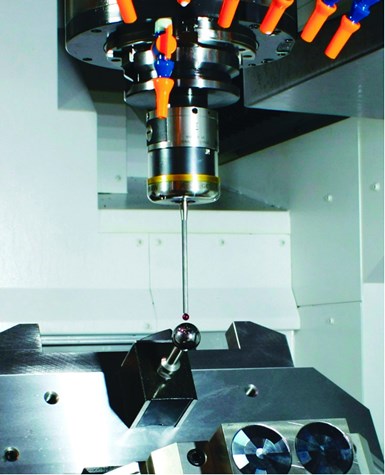 5-Axis Auto Tuning uses probing data that shows where a sphere is actually located on a machine so automatic compensation can be made to tune-out geometric errors.

• 5-Axis Auto Tuning enables a 5-axis machine, which Okuma says can have 11 geometric errors, to automatically tune itself. The company says the app uses touch-probing technology to determine and compensate for these geometric errors in less than 10 minutes. It does this by probing a precision sphere (which is installed on the machine table) throughout a range of table movements. The ideal true position of the sphere is known through mathematical data. Probing data shows where the sphere is actually located so automatic compensation can be made to tune out geometric errors that are causing discrepancies due to mechanical machine movement.