Fear Kills More CNC Machining Businesses Than Recessions Ever Will 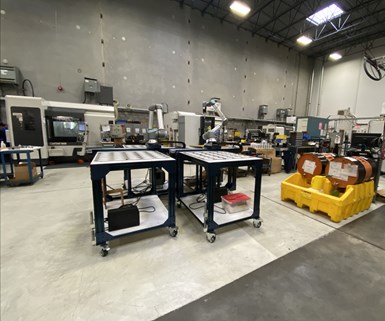 Udo Jahn says that old, inexpensive equipment is just not as productive as the costlier pieces. This is evident in this view of his shop floor. He says his shop has made it through hard times by resisting the urge to make fear-based business decisions.

Any person in business knows this: Fear is your constant companion. It’s a weight you carry and one every business owner, leader and entrepreneur feels at some point or another. There are years in which you wake up with it, carry it around and sleep with it — if you’re lucky enough to sleep at all. In business, you’re confronted with fear every day. It’s there shouting at you from the TV, waiting for you during a routine LinkedIn scroll and casually slotted in as a podcast advertisement. For every good economic story we read, there seem to be a hundred bad ones ready to wipe it from our minds, not to mention all the unsubstantiated news floating around.

The danger is that all of these news stories — real and not real — plant a toxic seed in businesspeople that takes root and results in poor, panicked decisions. More often than not, these decisions break a business. Now, I’m not advocating for people to stick their heads in the sand. No. What people need to do (myself included) is confront these fears, look at hard data and make fact-based decisions instead of having fear-motivated reactions.

I see this all the time in machining. When selecting new capital equipment to buy, business owners will look for the cheapest (can I get this for free?) piece of equipment they can find. Price is the only thing they consider. They do not consider productivity, downtime potential, output or anything logical. You might be scratching your head and asking yourself, “Why would someone buy like that?” But I see it all the time, and so do you. It’s a classic Band-aid/short-term-thinking purchase, and in my business, it’s one people make because they’re full of fear. Fear that the economy will tank. Fear that their customer will leave. Fear, fear and more fear.

The worst part about fear is that it’s easily preyed upon. There are some crafty salespeople out there selling cheap equipment who know just what to say to sway you into making a bad decision. I can still remember a salesperson telling me that for the cost of the quality piece of equipment I was considering, he could supply me with two. Aside from being a better value, they would be more productive. I almost fell for his pitch, especially when he added, “You never know what’s going to happen with the economy.” In the end, I had to bury my fear of the unknown and draw on facts.

The fear of making a wrong, expensive decision at a potential crossroads is always on everyone’s mind.

Here are some hard-earned facts I’d like to share. I’ve been told for 45 years that the economy is about to tank, that a recession is coming that the end is near. Despite these ominous foretellings, we’ve weathered every storm because of the equipment I’d previously purchased, which cost more but was more productive. It happened four times that I distinctly remember: the early 1980s, the early 1990s, the early 2000s and then the late 2000s. If I’d purchased that cheaper equipment, my company would be out of business today.

Ultimately, our purchasing behavior and mindset during times of uncertainty need to change. The fear of making a wrong, expensive decision at a potential crossroads is always on everyone’s mind, but making a fearful decision is the reason so many companies go under when hard economic times hit. Old, inexpensive equipment is just not as productive as the costlier pieces, and when hard times do come, your productivity is king. This is my experience from the shop floor.