Although The Industrial Internet of Things (IIOT) was a popular topic at Bi-Mu, the biennial machining and manufacturing exhibition in Milan, Italy, technology suppliers seem to have adopted a cautious outlook. 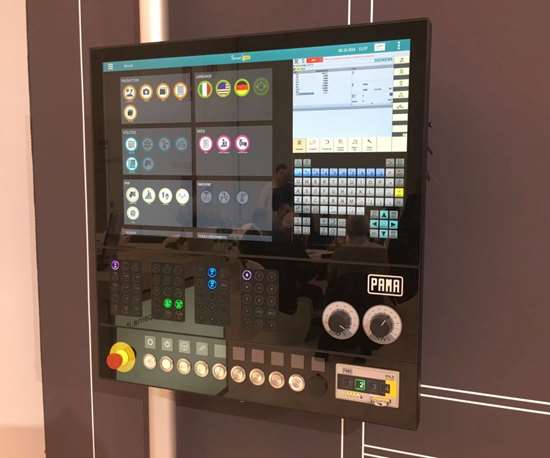 Smartphone-style CNC interfaces, like this example from Pama, were common on the show floor. Most integrate to the builder’s own monitoring and control software.

While some builders offer their own systems, others, like Biglia, marketed in the United States under the Eurotech Elite brand, prefer to rely more heavily on partners like TeamSystem for providing IIOT functionality.

Amid all the hype about what is being called the next phase of the industrial revolution, it’s natural for machine tool builders to seek to contribute in any way possible to the Industrial Internet of Things (IIOT). Yet, doing so just for the sake of being in that space can risk moving too fast at the expense of system reliability and performance.

So said Massimo Carboniero, freshly appointed president of Italian machine tool association UCIMU and vice president of metal-forming machine manufacturer Omera, during a press conference at the 30th edition of the Bi-Mu/SFORTEC trade show in Milan. These comments weren’t meant to suggest that technology facilitating the “smart factories” of the future shouldn’t be (or isn’t already) of utmost importance to Italian machine tool builders, which displayed their wares at the Fieramilano exhibition center October 4-8 along with more than 1,000 other technology suppliers from all over the world. Far from it, in fact. Reflecting Mr. Carboniero’s sentiments, most of these manufacturers of mostly large, made-to-order machine tools are, indeed, claiming a place at the proverbial table. At the same time, however, the mood from booth to booth seemed markedly reserved—not negative or unenthusiastic, just cautious, realistic about hurdles and wary of overhype. 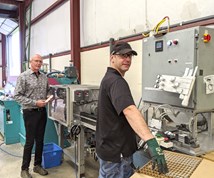 For instance, many builders made the point that much of the capability that people tend to group under the IIOT umbrella isn’t truly new. Customers such as large aerospace OEMs have long demanded spindle uptime percentages in the upper ‘90s, they say. Gathering data through machine-mounted sensors has long been a way to provide the deep operational intelligence needed to achieve that goal. Consider that Mandelli, a specialist in horizontal machining centers, has offered SCADA supervisory and control capabilities for decades. Representatives there and at other booths were happy to tout what they see as already-extensive real-world experience right along with their new, perhaps more exciting capabilities in this area.

For them, what’s new and exciting isn’t necessarily the idea of collecting data and adjusting the process accordingly, but the expanded possibilities for doing so: possibilities facilitated largely by advances in computing and networking technology. For example, Mandelli’s iPuma software suite has expanded far beyond SCADA, with capabilities ranging from managing preventive maintenance schedules to automatic optimization of machining parameters during the cut. Boring and milling machine manufacturer Pama boasts capability to network not only its own machines, but those from other builders through the latest version of its Predictive Production Management suite, PR2, which is designed for plant-wide monitoring and control. Paired with a CNC front-end designed to operate like a smartphone, the system collects and analyzes data on machine utilization and uptime, alarm conditions, maintenance schedules, overall equipment effectiveness (OEE) and more.

Other builders offered similar software, each version with its own twists. For instance, Breton’s Naviman system enables using eyeglasses with embedded cameras to record procedures in first-person perspective for training, evaluating and comparing strategies, or any other purpose.

On the show floor, all of this seemed exciting indeed, but in the real world, technology like this is still in its infancy. That was one takeaway from a visit to MCM, a manufacturer of machine tools as well as pallet changers and flexible manufacturing systems. Guiseppe Fogliazza is director of MCE, the 30-year-old, dedicated software division of MCM. He says one persistent challenge is that, despite significant advances in providing a common “language” for networking disparate types of equipment, communications standards such as OPC Unified Architecture or MTConnect can limit the ability to provide what he calls “multi-level, hierarchical models.” As an example of this, he cites two functions that any plant interested in IIOT would monitor closely on every machine: operating status (i.e., running, down for maintenance, down for unexplained reasons, etc.), and machining parameters like feeds and speeds. The former might change by the minute, and the latter changes by the second. Nonetheless, a common standard might put both on the same level. This is inherently wasteful, he says. As Mr. Fogliazza puts it, the system must “read the whole book every second,” as opposed to just a chapter.

Based on their booth demonstrations and touted capabilities, Italian machine tool builders that exhibited at Bi-Mu have plenty to offer when it comes to IIOT. However, they’re also thoughtful and realistic in their assessments of what exactly is possible at this very early stage of what’s being called the next industrial revolution.

For more on Bi-Mu and the technology on display, view this slideshow.