Recent advances in materials processing capabilities have renewed interest in material jetting, the additive process that allows 3D objects to be built by placing different combinations of material drop-by-drop.

This lion statue was made with material jetting using two different materials (pink and blue), which are blended together to create a third material (purple). Photo credit: Nick Meisel, Penn State.

Of the seven basic additive manufacturing (AM) processes available, material jetting is the AM technology that is closest to what we use for printing text and images on paper. This is because the printheads that are used for material jetting are very similar to those used for inkjet printing, except instead of dispensing ink, they are depositing droplets of material that create a 3D object layer-by-layer.

The origins of material jetting technology date back to the mid-1990’s when Solidscape (initially called Sanders Prototype Inc.) commercialized “Drop-on-Demand” technology for 3D printing with wax. The company still specializes in material jetting systems for making very precise wax patterns for jewelry and investment casting, having being acquired in 2011 by Stratasys and then sold off in 2018 to Prodways. 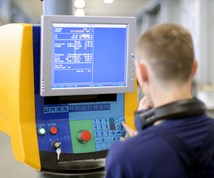 3D Systems introduced its ThermoJet platform for material jetting about two years after Solidscapes did, and they have continued to advance the technology into what it calls MultiJet Printing (MJP). Meanwhile, Israeli company Objet was the first to introduce material jetting for photopolymers in the late 1990s. They continue to develop and sell their PolyJet material jetting systems, having merged with Stratasys in 2012.

Material jetting offers some distinct advantages over other AM technologies, but it also has its drawbacks. First, material jetting is fast. Material is jetted out a line at a time versus extruded from a nozzle or cured/fused by a laser. The material that is being jetted is photosensitive and is cured via ultraviolet (UV) light almost immediately after it is deposited. Because the layers are so thin (usually 16-32 micron), the material is fully cured when the part is done building; so, no additional curing or thermal post-processing is needed as compared to parts made with many vat photopolymerization processes. Unfortunately, material jetting systems are still rather expensive given the complexity and proprietary nature of the printhead technology. Material jetting also requires supports for overhanging structures; however, supports can be easily dissolved away, leaving little trace of their existence.

Because of the small layer thickness, the dimensional accuracy of material jetting is very good, even when printing large parts, and parts made with material jetting have a great surface finish. Mechanical properties of material jetted parts are homogenous; however, the parts are relatively weak as they tend to be very brittle. This limits its use for functional components and end-use parts, but material jetting is great for prototypes, visual aids and tooling. In fact, this is one of the areas were material jetting excels because today’s systems offer multiple printheads on a single machine. This allows users to jet multiple materials at once, mixing them in different compositions during the build (see image). As a result, material jetting can be used to combine hard and soft or opaque and transparent materials within a single part, giving rise to a “digital material” that can be controlled at the voxel level. For those of you familiar with Minecraft, this is a good analogy — instead of building virtual structures block-by-block, material jetting allows you to build 3D objects by placing different combinations of material drop-by-drop.

As you might guess, material jetting also allows you to print 3D objects in color, just like we can print 2D images (and text) in color. Full color parts are another reason that material jetting is great for prototyping, and it is finding a real niche making medical models and visual aids for training doctors and surgeons. MRI and CT scan data for a patient can be easily converted into a 3D point cloud and printed in color — with different textures and material properties — to help doctors plan complex surgeries and medical procedures. This not only reduces time in the operating room but also helps saves patients’ lives in many complex and challenging cases.

Finally, like many AM processes, material jetting is seeing renewed interest thanks to recent advances in its material processing capabilities. For instance, XJET recently introduced NanoParticle Jetting technology, enabling a new way to 3D print ceramic materials. Meanwhile, researchers at Nottingham University are jetting metallic inks alongside insulating polymeric materials to 3D print functional electronic circuits. Given these advances, it is only a matter of time before we are making 3D metal parts using similar technology to the 2D printers on our desks.