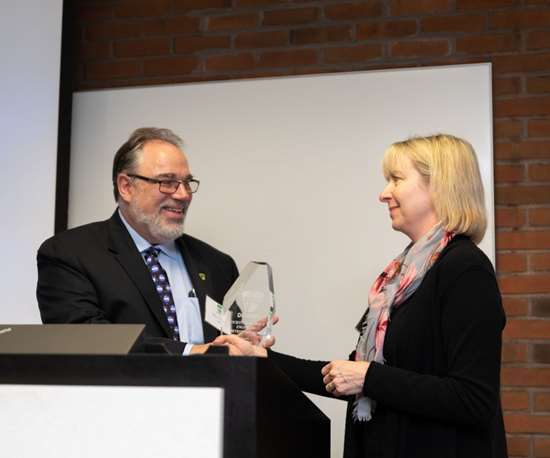 Wayne Hertlein was honored September 10 as Outstanding Member by the Detroit Section of the Society of Plastics Engineers (SPE). Wayne has been an active SPE member since 1981. Here, he accepts the Outstanding Member award from newly-elected Detroit Section President Eve Vitale of Series One LLC (Ortonville, Michigan). Vitale is also Chief Executive of the SPE Foundation.

This carpenter’s toolbox was made by Wayne Hertlein’s uncle for Wayne when he was just six years old. His love of tinkering, swinging a hammer and taking apart and reassembling things was an early sign of his future career in moldmaking, he says.

In addition to his active membership as part of the SPE Detroit Section, Wayne Hertlein also served as president of the Section for the last two years. Here, he is honored for his leadership by Eve Vitale, incoming president. Hertlein has held many other leadership roles in SPE, including with the Society’s Mold Technologies Division.

On Monday, September 10, at a special ceremony held during IMTS in Chicago, the Society of Plastics Engineers (SPE) Detroit Section named my friend, Wayne Hertlein, as its Outstanding Member of 2018. When he heard that he was to receive the honor, he asked me to assist him by writing his biography for the awards program. Having known Wayne for many years and as I currently serve on the board of directors of the SPE Mold Technologies Division with him, I felt privileged to oblige. I am honored to have the opportunity to share it here today and would welcome comments, anecdotes and congratulations for Wayne from his colleagues.

Wayne M. Hertlein has been an active and dedicated SPE & SME member since 1981. He currently serves on the boards of directors of the SPE Mold Technologies Division (formerly the Mold Making and Mold Design Division) as its treasurer and historian and the SPE Detroit Section of which he is Immediate Past President. In fact, in the Section’s history, he is only the second person to hold the position of president for two years. In addition, he served as Chair of the Mold Technologies Division in 2003 and from 2010 to 2012. Wayne was named an Honored Service Member of SPE in 2006. Other leadership positions include chairmanship of the SME’s Plastics Tooling and Mold Design Tech Group, SME Senior Member since 1987, Advisor to the Plastics Industrial Advisory Committee at Ferris State University since 2005 and serving as an editorial advisory board member for MoldMaking Technology Magazine from 2005 to 2008 and from 2012 to 2016. 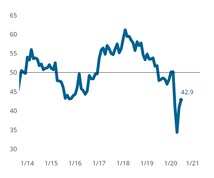 A native Chicagoan, you could say Wayne was born destined to work in the manufacturing industry. In his own words, he describes early signs of the career he would later pursue: “From an early age I enjoyed making things and taking things apart to see what made them work. My uncle made me a tool box with carpenter tools when I was about six years old. He would give me wood when we went to visit him, and I would sit there and saw, cut and hammer all day long. My father was a machinist and we always had tools around the house. When I was nine he gave me my first micrometer and taught me how to read it.”

Wayne began his career in 1976 at Armin Tool & Mfg. Co. (Elgin, Illinois) as an apprentice moldmaker and trained at the Tool and Die Institute in Park Ridge, Illinois. From then on, he demonstrated a passion for the industry and a desire to learn and lead. Upon receiving his journeyman moldmaker and mold designer certificates in 1979, he was also named Apprentice Moldmaker of the Year by the Institute and the perfect attendance award. He then worked full-time at Armin and part-time as an instructor assisting Henry Tschappat, then head of the Plastics Department at Elgin Community College in Elgin, Illinois, until 1982. There, he helped set up and operate plastics laboratory equipment, lectured in Moldmaking and toolmaking, and tutored handicapped and international students in plastics. Later, he also led the establishment of the Henry Tschappat Memorial Leadership Award Endowment at Ferris State University in 2004, followed by the Frank Marra Memorial Endowment in 2005.

In 1987, Wayne earned an Associates in Applied Sciences, Plastics, degree with honors from the Kalamazoo Valley Community College in Kalamazoo, Michigan. Even today, Wayne continues his pursuit of plastics industry knowledge. He is a senior earning a Bachelor of Science in Engineering Technology, with a plastics emphasis, at Lawrence Technological University in Southfield, Michigan, and currently works as Tooling Manager at RPC/Superfos, Letica Corporation in Rochester Michigan. The previous roles Wayne has held at various leading manufacturing companies are many, but in every case he has enjoyed the opportunity to apply his knowledge of plastics materials, steel and mold construction materials, processing and engineering and also product design and development. A rich career indeed.

Wayne resides in Mount Clemens, Michigan, with his wife Elizabeth. In keeping with his quest for knowledge, a hobby he enjoys is collecting, updating and maintaining his library, which comprises more than 8,000 textbooks and other documents relevant to the plastics engineering industry. He also spends his free time enjoying new experiences like supporting youth programs to get young people interested in manufacturing, engineering and moldmaking. He attends the Makers Faire every year and the Future City Competition hosted by the Engineering Society of Detroit (for the past eight years as a judge). He says he is still a kid at heart, visiting aerospace museums, the Henry Ford Museum, art museums and so on, whenever he has the chance.

Speaking of kids, one of Wayne’s favorite experiences as an SPE Detroit Section member has been his participation in the annual Christmas Toy Distribution project which, for each of its 18 years, has provided between 60,000 to 80,000 plastic toys to needy children in partnership with American Plastic Toys Inc. As the Section’s 75th president, he says he was privileged to see the millionth toy donated.

I asked Wayne how it feels to be honored by his fellow SPE Detroit Section members and he replied, “It was truly an honor to be recognized as the 2018 Outstanding Member. The past two years were very rewarding and one of the highlights of my career. I could not have done this without the help and support of my Detroit Section board of directors.” And then he added: “It is still hard to believe that 42 years have passed from when I started my apprenticeship at Armin Tool.”

Eve Vitale is co-owner of Series One LLC, a engineering consulting firm specializing in serving the plastics industry, and now president of SPE Detroit. She presented Wayne with the award. I asked Eve to share her thoughts about Wayne and without hesitation, this is what she told me: “The Detroit Section is the birthplace of SPE. It started 76 years ago in response to the changes foreseen in the automotive industry relating to polymeric materials, also known as plastics. Detroit SPE is a hardworking and driven bunch. Through our efforts we have contributed over $1,200,000 for plastics education, scholarships, and grants in the last 20 years. Our efforts to support the plastics industry, which is the third largest manufacturing sector in the U.S., drives us to excellence in conference planning and execution as well as community service. Which brings me to Wayne Hertlein.

“Wayne Hertlein is a gentle and wise leader and Detroit SPE flourished under his direction. I believe his two-year term was a first in our 76 years and there wasn't a moment's hesitation in appointing him for a second term when the president-elect was unable to fulfill his duties. I inadvertently was put on the leadership path at Detroit SPE, but that's another story. I needed advice, mentoring, and a strong shoulder as I prepared for my presidency. Wayne's depth of experience in our industry as well as societies that promote our industry was invaluable to me personally and to our membership at large. I could go on and on about his professional and volunteer experience that has made him the man he is, but what I would like to share with your readers is that not only is he a subject matter expert, volunteer, and leader, he is also a kind gentleman—something you don't encounter every day. I appreciate that the most!”

I guess it is true that when you genuinely love what you do in your career, time passes enjoyably and you never really “work” a day in your life. That is Wayne’s gift—to himself and to our industry. Congratulations, Wayne.