Ahaus has invested in the training of nearly 100 apprentices in the past 40 years, with 43 of those apprentices graduating from the program with a post-secondary degree.
#workforcedevelopment 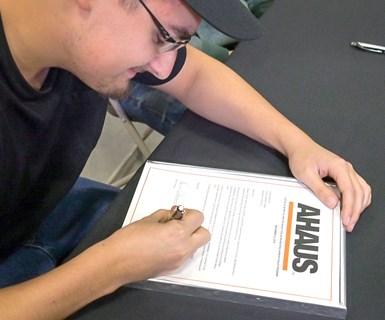 Community members and Ahaus employees recently gathered to honor the 40th anniversary of the company’s apprentice program. The program was started in the 1970s as a response to a need to train a local workforce in tool and die making skills. Rick Ahaus, Loren Ahaus and Mick Miller, former executives of Ahaus Tool and Engineering, gathered with other manufacturers in the greater Richmond, Indiana, area to discuss cooperating on an effort to train interested people.

Following that meeting, Ahaus and a few other shops began the process of partnering with local educators to fulfill the need. Over the years, area high school career centers, Ivy Tech Community College, Purdue Polytechnic and Indiana University East have all worked with Ahaus to train and educate employees.

As a registered program of the U.S. Department of Labor, the Ahaus apprenticeship program includes post-secondary education and a full-time job working at Ahaus in the student’s chosen field. Ahaus has invested in the training of nearly 100 apprentices in the past 40 years, with 43 of those apprentices graduating from the program with an associate’s or bachelor’s degree as well as a certification from the Department of Labor honoring the 8,000-plus hours of training included in the program.

Current Ahaus apprentice Shane Reagan reflects on his experience so far in the program: “I really enjoy working on the shop floor and learning from the older guys who have been working here for years. I try to absorb everything they say so I can learn to be as good at this as they are.”

President and co-owner Kevin Ahaus shared that the investment in the program for the last 40 years has paid off: “Thinking back to that initial meeting decades ago, I know that some of the shops represented there are no longer in operation. I think the decision Ahaus made to be committed to training and developing our people is one of our best, and it has allowed us to contribute to our community for the past 40 years.”

Ahaus has plans to continue the program and build on the success in future years. Vice president and co-owner Jeff Sheridan expressed the desire to create opportunities in more aspects of the business and deepen the training, mentoring, and development that happens at Ahaus each day. “We often say that training and developing people is a part of our DNA; it’s just who we are as a company,” he says. “We’ve been in business for nearly 75 years, and helping people reach for better possibilities will continue to be core to who we are as we move forward.”