The expansion includes more manufacturing and tool reconditioning space, the addition of a new PVD coating center as well as an expanded Technology and Training Center. 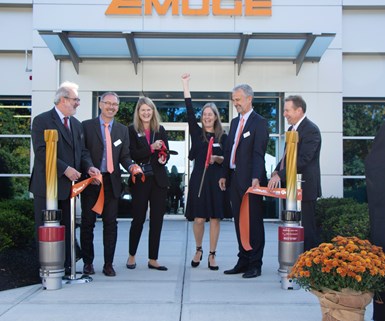 Emuge Corp. recently held a grand opening ceremony of its significantly expanded manufacturing facility. Marking a 35-year presence in the U.S. along with increased growth in North America, the Emuge expansion includes more manufacturing and tool reconditioning space, the addition of a new PVD coating center as well as an expanded Technology and Training Center. The expanded facility doubles the size of the original building to over 50,000 square feet.

Over 150 attendees joined Emuge to celebrate the occasion. The grand opening featured a formal ribbon cutting, the unveiling of a statue of Emuge founder Richard Glimpel, a full facility tour and live machining technology demonstrations.

“The expansion will allow us to better serve our customer base in the U.S. and Canada,” says Bob Hellinger, president. “The growth we have experienced in our aerospace and power generation customer base has been significant in the past few years. The expanded facility will provide additional capacity to domestically manufacture special solid carbide tooling and other standard solutions within our milling tools portfolio.”

Mr. Hellinger adds, “Our facility expansion will also allow us to continue our commitment to creating jobs in Massachusetts. We project to add 25 to 30 new employees over the next five years to our current roster of 75.”

Emuge executives were joined by officials including John Killam, president and CEO of the Massachusetts Manufacturing Extension Partnership (MassMEP).