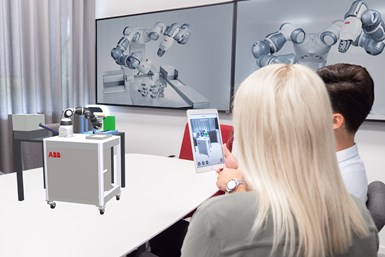 ABB’s RobotStudio
augmented reality (AR) viewer allows users to visualize where and how robotic automation can fit into the manufacturing processes using a smartphone or tablet.

The app can be used to test any model created in RobotStudio, giving users an idea of the size and scale of a robot or robot cell and how it can be deployed on a factory floor to fit around existing production equipment. Using AR technology, the app overlays the modeled solution into the real-life production environment, with the ability to scale it to full size and rotate it through a variety of angles to achieve the best result. The AR viewer also allows the user to watch the model in action. A timeline feature makes it possible to check the cycle time and go quickly to a certain point in time in the animation, enabling the user to find ways of enhancing performance or pinpointing a potential issue.

Available from the Apple Store and Google Play Store and viewable on any compatible smart device (from iPhone 6s, iPad Pro or onwards and Android 7.0 onwards with ARCore support), the app provides a safe and easy way of visualizing an installation with none of the potential concerns over complexity, hygiene or nausea that can occur with other virtual reality-based alternatives, according to the company.

The AR viewer is suitable for companies that are new to robotic automation, or for those who have previously lacked the time or resources to plan an installation.