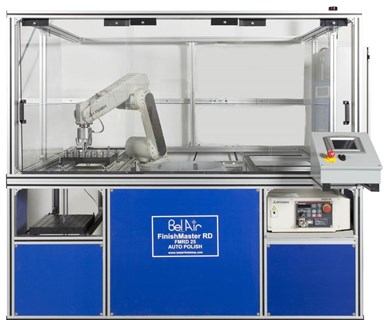 Bel Air’s AutoHone reverse drag finisher rotates the media instead of the parts, which are then dipped into the flowing media in a rotating bin. The machine combines this method with robotic automation, enabling deburring, polishing, cleaning and drying. The machine is said to process parts in as little as 5 sec., making it useful for medical, automotive, aerospace, firearms, machined parts, and 3D printed parts finishing.

The robot arm enables five dimensional motions, meaning parts can be inserted into finishing media at angles tailored to achieving specific finishing specifications. Following the finishing process, the robotic arm cleans the part within the optional ultrasonic cleaning station and can also dry the part in the optional drying station before placing the part back into the tray.

Tool honing with the AutoHone reduces the friction of cutting tools by removing microscopic burrs and sharp edges increasing cutting speed and providing a surface to which coatings can adhere better, the company says. When pre-coated pieces are honed, the machine removes microscopic irregularities on the surface of the tool. These irregularities happen when the coating is unevenly distributed across the part’s surface.