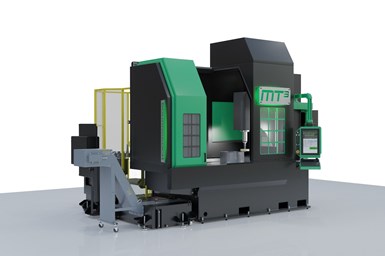 The newest addition to Bourn & Koch’s lineup of American-made machine tools is the MT³, a multifunctional machine tool platform capable of performing grinding, milling, turning and drilling/tapping operations in one setup. The machine is primarily designed as a vertical cylindrical grinder, supplementing the company’s current VBG offering. The MT³ comes standard with a 42" diameter T-slot worktable and precision grinding spindle with an HSK-50A connection. The machine’s spindles are interchangeable via an HBK-200 clamping system, allowing the right spindle to be used for each application. The machine is equipped with custom workholding from Advanced Machine & Engineering to manufacture a hob spindle cartridge from one of Bourn & Koch’s 400H hobbers in one setup.

The machine is expandable from a vertical grinder to a “one and done” machine tool system, incorporating various spindles and tools into an added optional cell. These components can be quickly changed via a FANUC R2000 robot and Bourn & Koch’s Alien Claw end-of-arm tooling.

A spindle rack and disc-style toolchanger are incorporated to the cell. Users can program the machine via combination of Bourn & Koch’s grinding HMI and FANUC Manual Guide-i, employing a FANUC 0i CNC control for all machine functions. A virtual y-axis allows for the machine to perform standard milling functions. The MT³ spindle features a powerful FANUC Beta-il 160M motor capable of producing 30kW from 2,000-10,000 rpm, providing ample power and range for a variety of grinding, milling, and drilling/tapping applications. This machine platform is modular, with future plans for a vertical gear hobbing machine and a five-axis machining center in the works.